Back in April, legendary investor Cathie Wood of Ark Invest turned heads in the crypto world with a breathtaking Bitcoin (BTC 1.44%) price prediction of $1 million. That, of course, was before the market meltdown. Now, six months later, Ark Invest has reiterated its $1 million price target for Bitcoin. After running the numbers, the investment firm concluded that the three basic use cases for Bitcoin support a future market capitalization of $28 trillion, or more than $1 million per Bitcoin.

What’s truly mind-blowing about that calculation is that the team at Ark Invest arrived at that $28 trillion market cap figure by adding a new use case for Bitcoin: as “an insurance policy against arbitrary asset seizure.” This most likely refers to the concerns that many libertarian backers of Bitcoin have about governments in general. Ark Invest seems to be implying that people could choose to invest in Bitcoin as a way to protect their savings from government confiscation. Mind blown.

In years past, “arbitrary asset seizure” was something that only happened in dystopian novels like George Orwell’s 1984. Unless there was criminal activity or other wrongdoing involved, governments couldn’t simply take your money. But consider what’s happening now in Western society. We are very quickly moving from “de-platforming” to “de-banking” people based on their views. Emboldened by the efforts of Big Tech social media companies to ban, censor, and de-platform people who have certain views or opinions, it now looks like financial services companies are starting to roll down this same slippery slope as well. 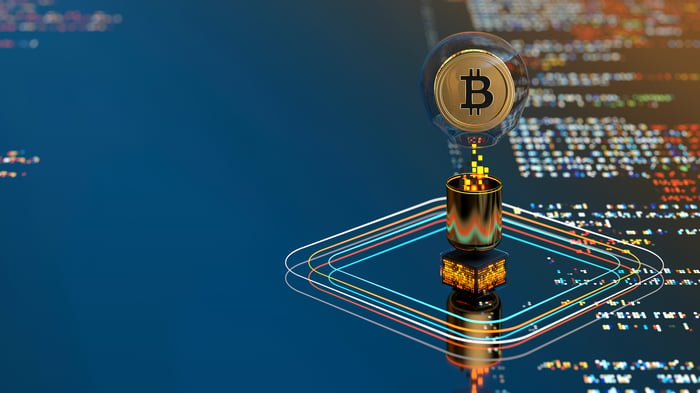 Just look at what’s happening now with Kanye West. JPMorgan Chase (NYSE: JPM) is now looking to sever its relationship with Kanye West based on the problematic and highly offending things he has said online and in public. In the same way, payment services giant PayPal (NASDAQ: PYPL) recently came under public fire for its controversial plan to fine customers $2,500 every time they spread misinformation online. To its credit, PayPal immediately walked this back and apologized.

In a recent Bloomberg TV interview, Ark Invest specifically noted that Bitcoin is “censorship-resistant.” This implies that investing in Bitcoin allows you to say certain things — even if they violate the terms of service of a particular platform — because there is no fear of censorship. Ark Invest also noted that Bitcoin is “non-sovereign,” meaning that a sovereign government will never be able to peek inside your crypto wallet and see what you have inside. You know, just in case they don’t like what you’re saying about them online. We saw this scenario in Canada earlier this year, when the Trudeau government attempted to freeze the bank accounts of anyone aiding the “Truckers Convoy” in Ottawa. The easiest way to silence opposition, apparently, is to de-bank it.

From this perspective, Bitcoin could be a way to circumvent the current system and keep your assets safe from seizure. This could be another of the benefits of cryptocurrency. A decade ago, it was bad actors who were trying to hide their shadowy dealings from the state. This time around, it’s people who no longer trust sovereign governments to do the right thing. This is not to say that this is the only reason people invest in Bitcoin — the overwhelming majority are simply looking to make a profit. Already, crypto enthusiasts are urging Kanye West to launch a new cryptocurrency or invest in Bitcoin as a way to avoid de-banking. Perhaps not surprisingly, Kanye West has already been spotted in public wearing a Satoshi Nakamoto baseball cap as a nod to the anonymous creator of Bitcoin.

The three pillars of Bitcoin valuation

Of course, the team at Ark Invest is not suggesting that this fear of censorship and asset seizure is the only reason that supports a $1 million price for Bitcoin. As a crypto analyst for the firm said in a Bloomberg TV interview, the use cases for Bitcoin are additive — you can stack them on top of each other to arrive at a final valuation. The primary use case for Bitcoin is as a digital store of value, similar to gold. The second use use for Bitcoin is as a payment and settlement network. The “insurance policy against arbitrary asset seizure” is the third and final use case.

A price of $1 million for Bitcoin might sound absurd and fantastical, but if society keeps trying to de-bank people it doesn’t approve of, it might not sound so outlandish in a few years. At that point, the only people who will be able to say what they really think and feel might be the people who were prescient enough to move their money from fiat into crypto.