Manchester City qualified for the last 16 of the Champions League despite resting Erling Haaland, missing a penalty and having Sergio Gomez sent off in a frustrating VAR-dominated goalless draw with Copenhagen.

Rodri also had a goal disallowed as referee Artur Dias made repeated visits to the pitchside monitor at a raucous Parken Stadium in Denmark.

The stalemate still guaranteed City’s place in the last 16 of the Champions League for another year after Sevilla later failed to beat Borussia Dortmund – but it was not a night that will live long in the memory.

Explaining his decision not to play Haaland, Guardiola said during his post-match press conference: “He finished the game against Southampton so, so tired and didn’t recover well.

“Yesterday was not good, today a little better but not perfect so we decide not to take the risk.”

Man of the match: Rodri.

How City were frustrated in Denmark

All of the main talking points came in the first half and it was remarkable the Group G clash remained scoreless.

Yet with the prolific Haaland on the bench for the first time this season, City were not at their fluent best and Copenhagen tested them much more than in last week’s 5-0 thrashing in Manchester.

There was a heart-in-mouth moment for goalkeeper Ederson after just four minutes when he miscontrolled a backpass to concede a corner. For a split-second, he appeared to think the ball was rolling towards his own goal.

City thought they had taken the lead when Rodri fired a crisp shot into the top corner from outside the area after 11 minutes.

Yet, in what was to become a common theme, the Portuguese referee was invited to have a second look. Much to City’s consternation, he ruled out the strike for handball against Riyad Mahrez in the build-up.

Manchester City striker Erling Haaland was rested for the first time this season as Pep Guardiola made five changes to his side following Saturday’s 4-0 win over Southampton in the Premier League.

Julian Alvarez was given a chance to impress in his place in an attacking front three along with Jack Grealish and Riyad Mahrez.

Aymeric Laporte returned to partner Manuel Akanji in central defence with Joao Cancelo and Sergio Gomez in the full-back slots.

Ilkay Gundogan came in for Bernardo Silva in midfield.

Mahrez looked like being the beneficiary of the VAR’s intervention soon after, however, when referee Dias awarded City a penalty following another review.

The official concluded Nicolai Boilesen had handled Manuel Akanji’s header at goal but Mahrez was unable to take advantage as Kamil Grabara saved his spot-kick.

There was then further drama at the other end when Gomez tangled with Hakon Haraldsson on the edge of the area. Dias initially allowed play to go on but, after later studying replays, decided to send the City left-back off.

Replays suggested Copenhagen might even have had a case for a penalty but they had to settle for a free-kick on the edge of the area, which came to nothing.

Forced to play with 10 men for an hour, City manager Guardiola decided to sacrifice Mahrez to send on an extra defender in Ruben Dias. The visitors unusually lacked cohesion and, spurred on by a vociferous home crowd, Haraldsson shot narrowly wide.

City started the second half stronger with Kevin De Bruyne forcing Grabara to make a good save but Copenhagen continued to frustrate them.

The hosts enjoyed some good possession and Isak Johannesson was close to turning in a dangerous low ball across the box.

The game fell flat and there was a shortage of goalmouth action until Joao Cancelo tested Grabara from distance late on.

The introduction of Phil Foden could not spark City and the game petered out.

Pep: Many players are fatigued

Speaking after the match, Guardiola felt Haaland was not the only player to be feeling the effects of their recent exertions.

He said: “I thought about energy levels. Many players didn’t start because they are really exhausted with fatigue and some niggles.

“Phil (Foden) has also some problems and Bernardo (Silva) was so tired yesterday, he told us. The players I played felt better.”

On his team’s performance, he added: “To play one hour like that is tough. The width of the pitch made it tough to control.

“We had a lot of possession and in the last 10 minutes with Phil coming on I felt maybe we could break it, but the players gave absolutely everything.

“It’s a good point and we will take it. I’m so satisfied. Tomorrow we will regenerate and then we have two days to prepare (to play) against Liverpool.”

Asked if he understood the handball decisions. Guardiola said “no” but added he “didn’t see” them. 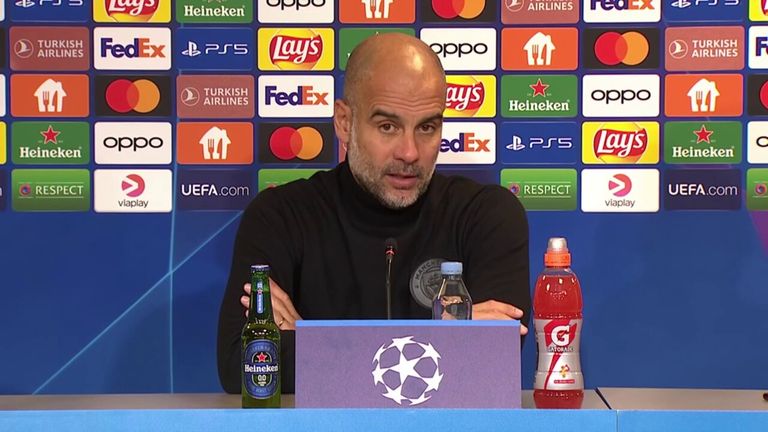 Rodri: Frustrating but we respect decisions

On the first-half VAR decisions, Rodri told BT Sport: “Sometimes it’s like this, you have to live these types of games. With an early red card it’s difficult for the team but we fight to the end and have chances to score – a disallowed goal and a missed penalty but it’s difficult when it’s ten against 11.

“I’m a bit frustrated of course, I don’t think anyone realised what happened but apparently it’s a handball. I don’t know if it’s intentional or not but it is what it is. We respect the decision. Then we have a penalty miss and the red card changes the game.

“We wanted to come here and win, it’s frustrating but we have a red card and we fight to the end. Of course we want to win but for the way we played, ten against 11, we cannot be sad.”

Copenhagen coach Jacob Neestrup, whose side were thumped 5-0 in Manchester last week, felt his players did the club proud.

“This was first and foremost a team performance. It was great work from the coaching staff and the players.”

The first time Erling Haaland has not been in the starting line-up and the first time Manchester City have failed to score this season. Coincidence? Probably.

Going down to 10 men against Copenhagen was the real problem for Pep Guardiola, but the goalless draw will not concern him too much. They are still in pole position to win their Champions League group.

It will be interesting to know what Haaland thought of Guardiola’s decision to leave him on the bench, though. The City boss suggested the Norwegian was “tired”, but the 22-year-old is looking to create history and Tuesday night would have been another perfect opportunity to add to his remarkable Champions League goal tally.

With 28 goals in 22 games, his next strike will see him equal the totals of David Trezeguet (58 appearances), Roy Makaay (61 appearances) and Patrick Kluivert (71 appearances). 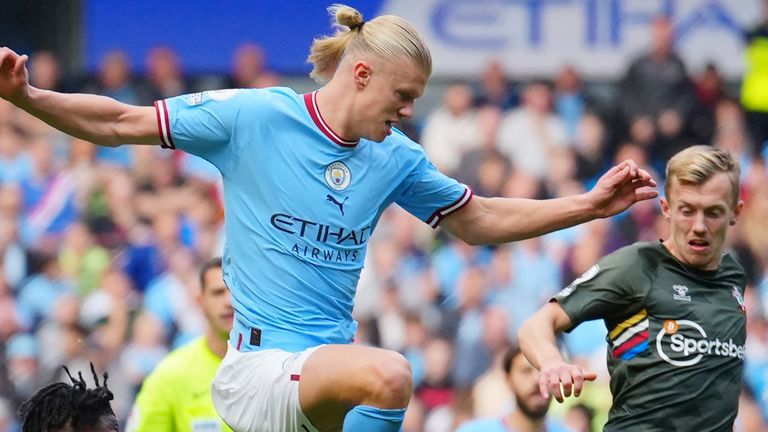 In the past week alone in all competitions, Haaland has scored two goals against Copenhagen, three against Manchester United and one against Southampton. He has 20 already this season.

But after starting all of City’s 13 games before their trip to Denmark, perhaps he did need a break. Or perhaps Guardiola had one eye on City’s next fixture.

His star striker is now refreshed for Liverpool on Sunday, live on Sky Sports. A frightening thought for Jurgen Klopp’s side.

Pep Guardiola’s side’s next fixture is then Brighton at home on October 22 after their match at Premier League leaders Arsenal on October 19 was postponed to accommodate the Gunners’ rearranged Europa League game against PSV Eindhoven.