Shakira and her ex Gerard Piqué opted to sit separately as they both attended son Milan’s baseball game in Valencia on Thursday.

The couple announce their split in July after 12 years of marriage and cheating allegations soon began to swirl in the Spanish tabloids.

While the pair are reportedly trying to remain friends for the sake of their sons Milan, nine, and Sasha, seven, the duo kept their distance as they attended the sporting event.

Shakira, 45, looked effortlessly stylish for the outing as she donned a distressed denim jacket that she paired with a plain white T-shirt and a bucket hat.

Pique, 35, opted a team T-shirt from their son’s baseball club that he layered over a long sleeved white top, but kept a low profile in a baseball cap and shades. 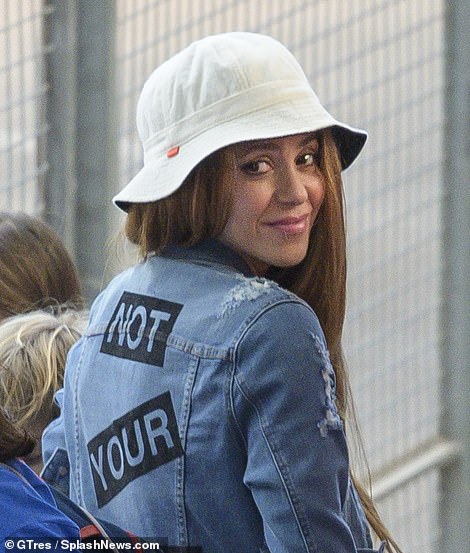 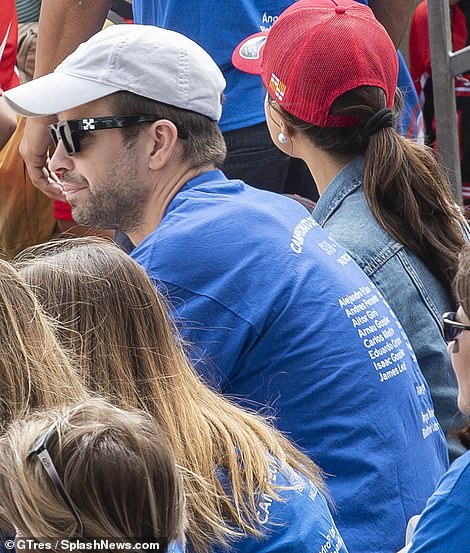 Keeping their distance: Shakira and her ex Gerard Piqué opted to sit separately as they both attended son Milan’s baseball game in Valencia on Thursday

The outing came after it emerged that Shakira seems to be settling scores with her ex via her music after the Spanish footballer was allegedly unfaithful.

She first appeared to include a jab at Piqué in her single Te Felicito (I Congratulate You).

A key line in the song is translated as, ‘To make you whole / I broke myself in pieces / I was warned, but I didn’t take heed / Don’t tell me you’re sorry / I know you well and I know you’re lying.’

In an interview with Elle Magazine, the hitmaker was asked about the line and it’s apparent connection to her marital issues. 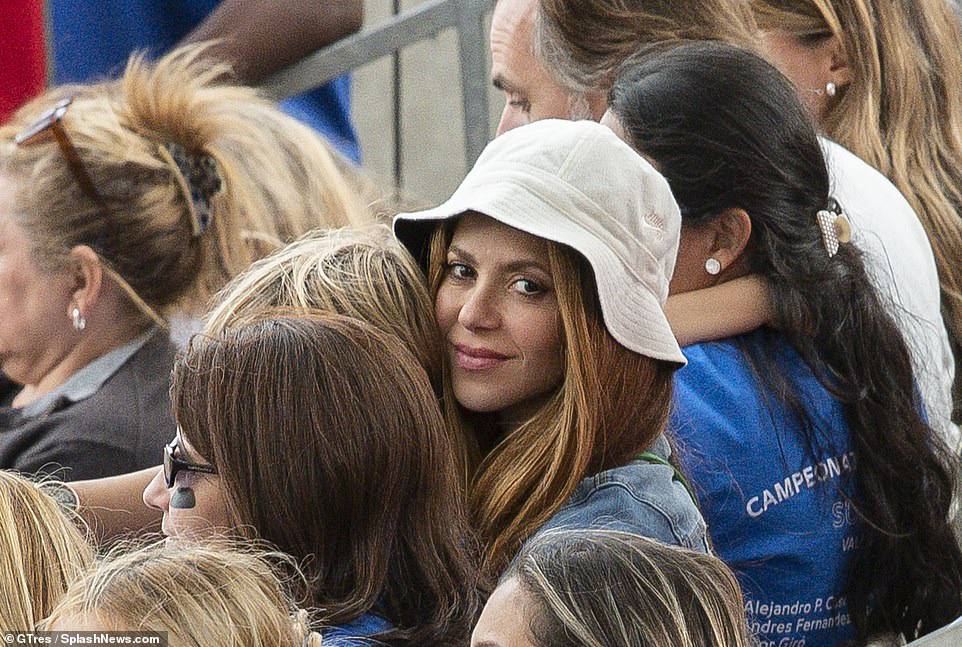 Sitting pretty: While the pair are reportedly trying to remain friends for the sake of their sons Milan, nine, and Sasha, seven, the duo kept their distance as they attended the sporting event with Shakira seen sitting with Sasha 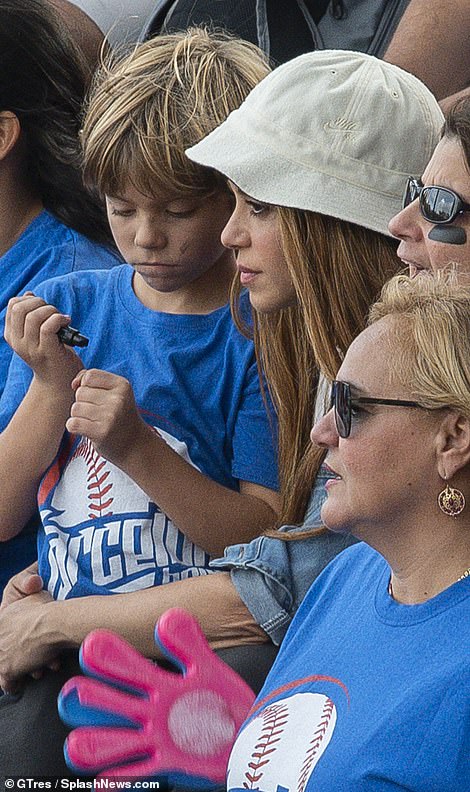 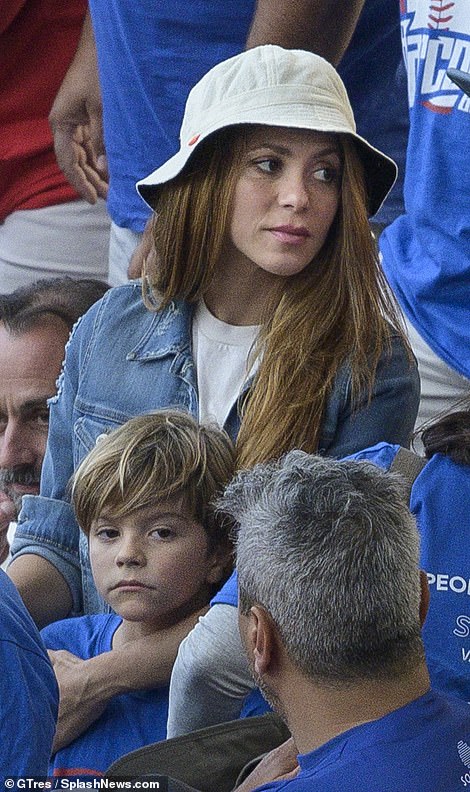 Casually cool: Shakira, 45, looked effortlessly stylish for the outing as she donned a distressed denim jacket that she paired with a plain white T-shirt and a bucket hat 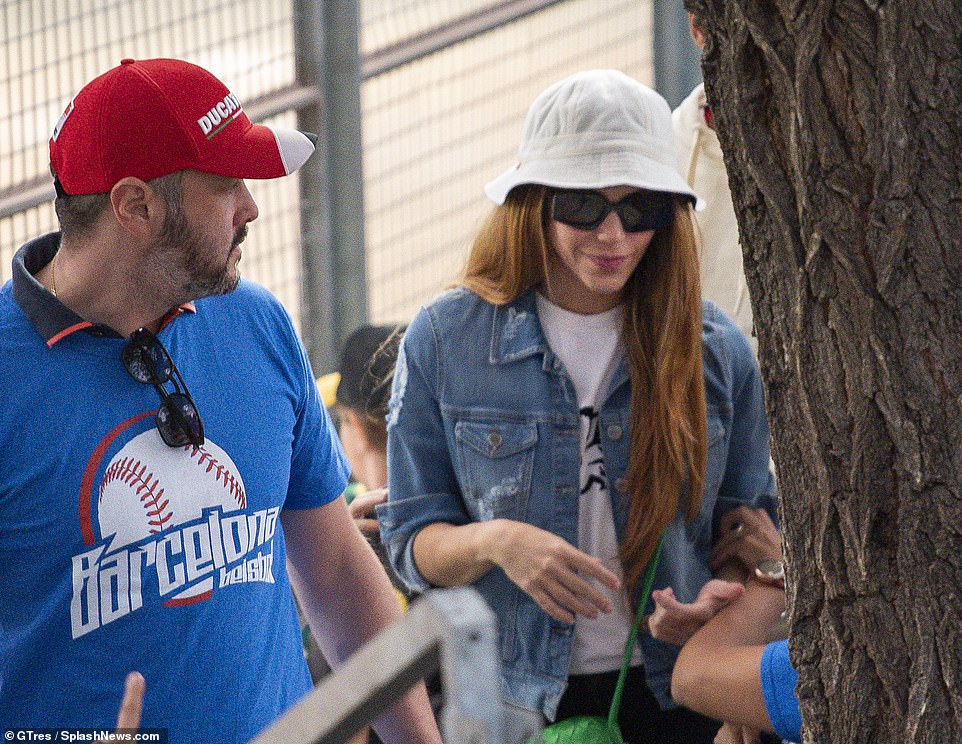 Still socialising: Shakira had no problem making friends at the game as she was seen chatting away with various attendees

‘Is that the feeling that you had that you kind of had to give a part of yourself during that relationship, which perhaps was hard to get back?’ she was asked by Lulu Garcia-Navarro.

‘I can only say that either consciously or subconsciously, everything I feel, everything I go through is reflected in the lyrics I write, in the videos I make,’ Shakira responded. ‘When the glove fits, it fits. Like I said before, my music is that channel.’

In the video, he appears to play both a romantic interest to Shakira, as well as a robotic clone of the same person, which Shakira tinkers away at until it comes to life.

It comes as Shakira and Pique continue to try to hash out an agreement on their separation, with the pair recently being spotted outside of a law firm’s offices. 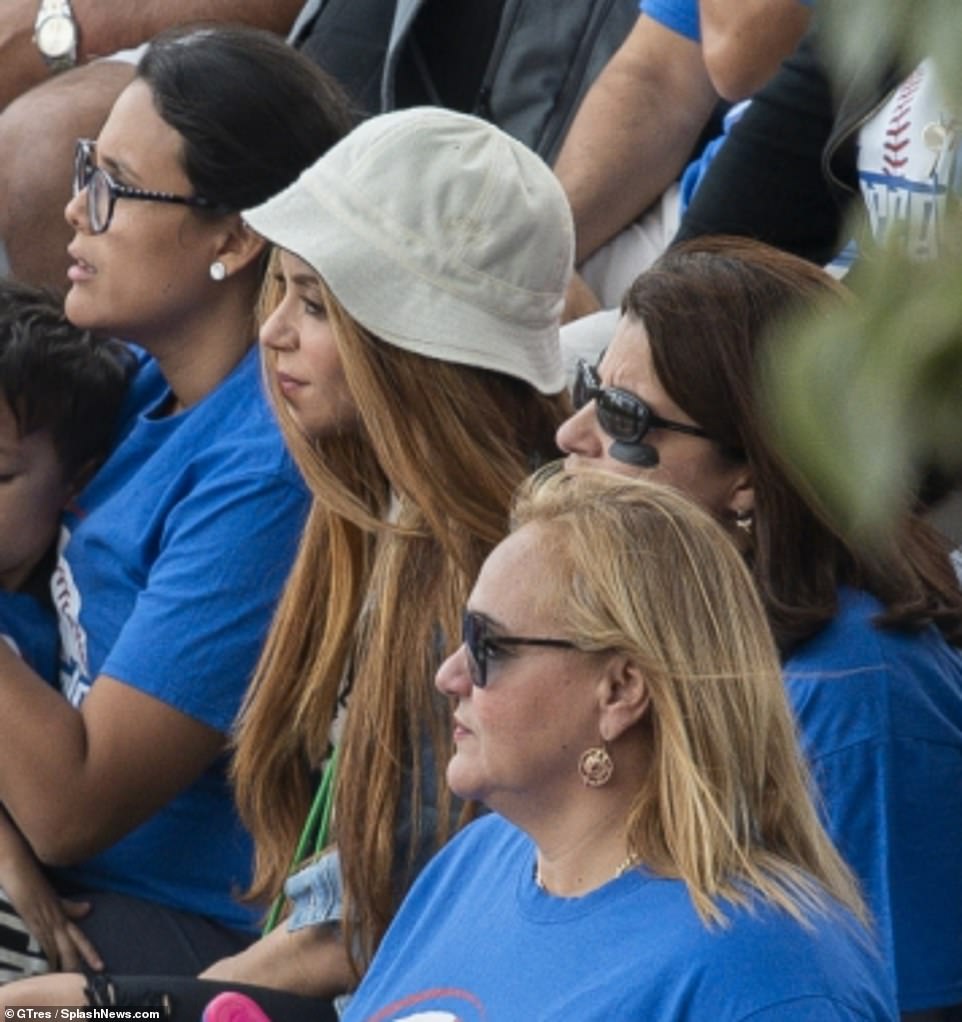 Plenty on her mind: As well as dealing with her looming divorce, Shakira’s legal woes include an impending trial on charges of tax fraud

As well as dealing with her looming divorce, Shakira’s legal woes include an impending trial on charges of tax fraud.

Spanish prosecutors accused the entertainer in 2018 of failing to pay 14.5 million euros ($13.9 million) in taxes on income earned between 2012 and 2014. Prosecutors are seeking an eight-year prison sentence and a hefty fine if she is found guilty of tax evasion.

Shakira has repeatedly denied any wrongdoing and rejected a deal with authorities to avoid going to trial. Her public relations firm has said that she has already paid all that she owed and an additional 3 million euros ($2.8 million) in interest.

The court based in the town of Esplugues de Llobregat near Barcelona said that Shakira will face six counts of tax fraud. The date for the trial has yet to be set. 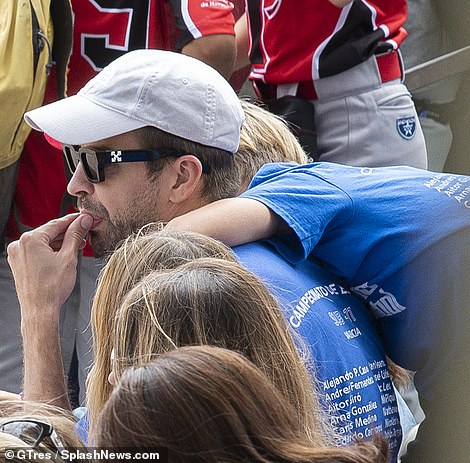 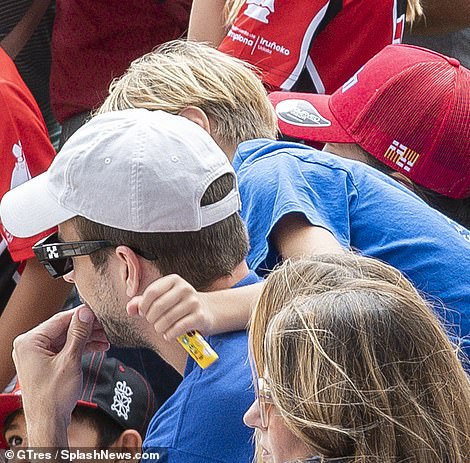 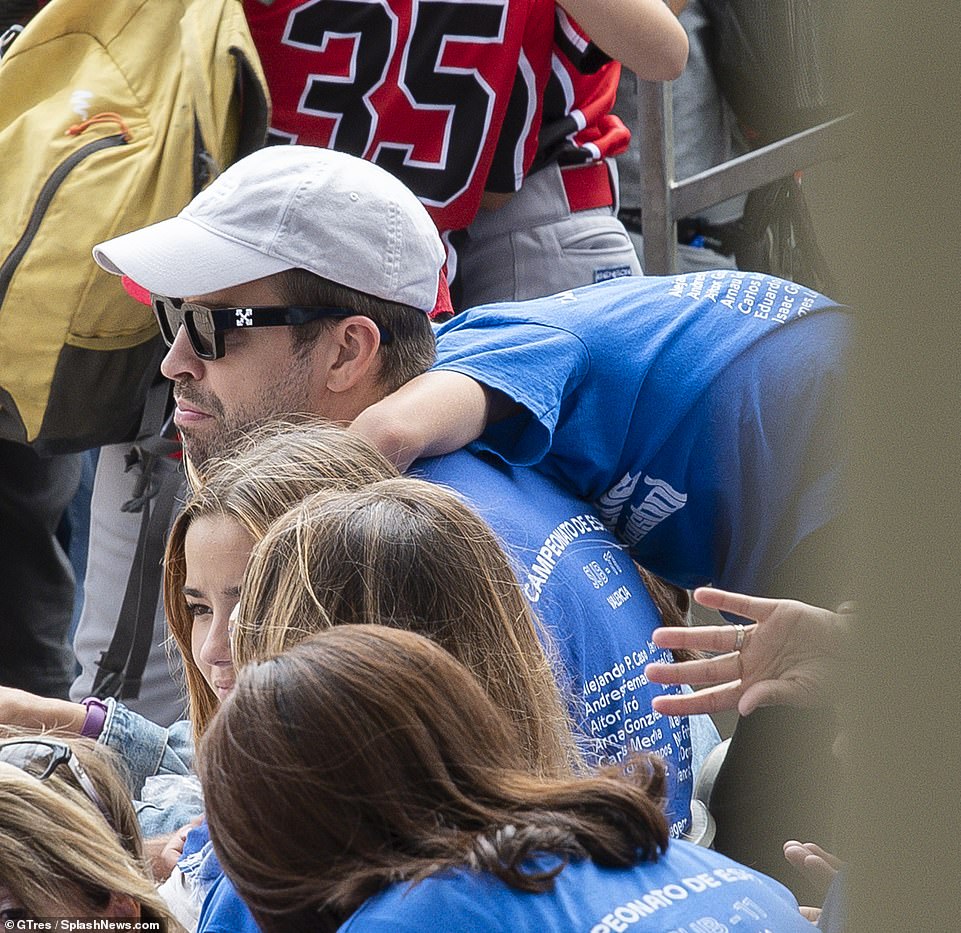 Adorable: Sasha wrapped his arms around his father for a hug as they watched the game together

Meanwhile, Hips Don’t Lie singer Shakira spoke for the first time about her unexpected split from Pique in a new interview for Elle Magazine’s October issue.

However, she opted to not stay mum about his new relationship with a much younger woman.

The singer was candid about how difficult life has been as her relationship with the athlete has fallen apart, accompanied by an in-depth interview with Lulu Garcia–Navarro.

Shakira made her first public comments on the split as she said: ‘Oh, this is really hard to talk about personally, especially as this is the first time I’ve ever addressed this situation in an interview.

‘I’ve remained quiet and just tried to process it all. Um, and yeah, it’s hard to talk about it, especially because I’m still going through it, and because I’m in the public eye and because our separation is not like a regular separation. And so it’s been tough not only for me, but also for my kids. Incredibly difficult.’

She went on to say that the constant spotlight on her personal life has been difficult for her family especially since they have a hard time without being bombarded by media and fans.

Shakira explained: ‘So it’s hard. And I’ve tried to conceal the situation in front of my kids. I try to do it and to protect them, because that’s my number one mission in life.

‘But then they hear things in school from their friends or they come across some disagreeable, unpleasant news online, and it just affects them, you know?’

The now former couple announced their split after a dozen years together back in June though it seemed like Shakira did not want the relationship to end at the time.

Piqué is already is in a new relationship with 23-year-old PR student Clara Chia Marti many had wondered how it all ended. 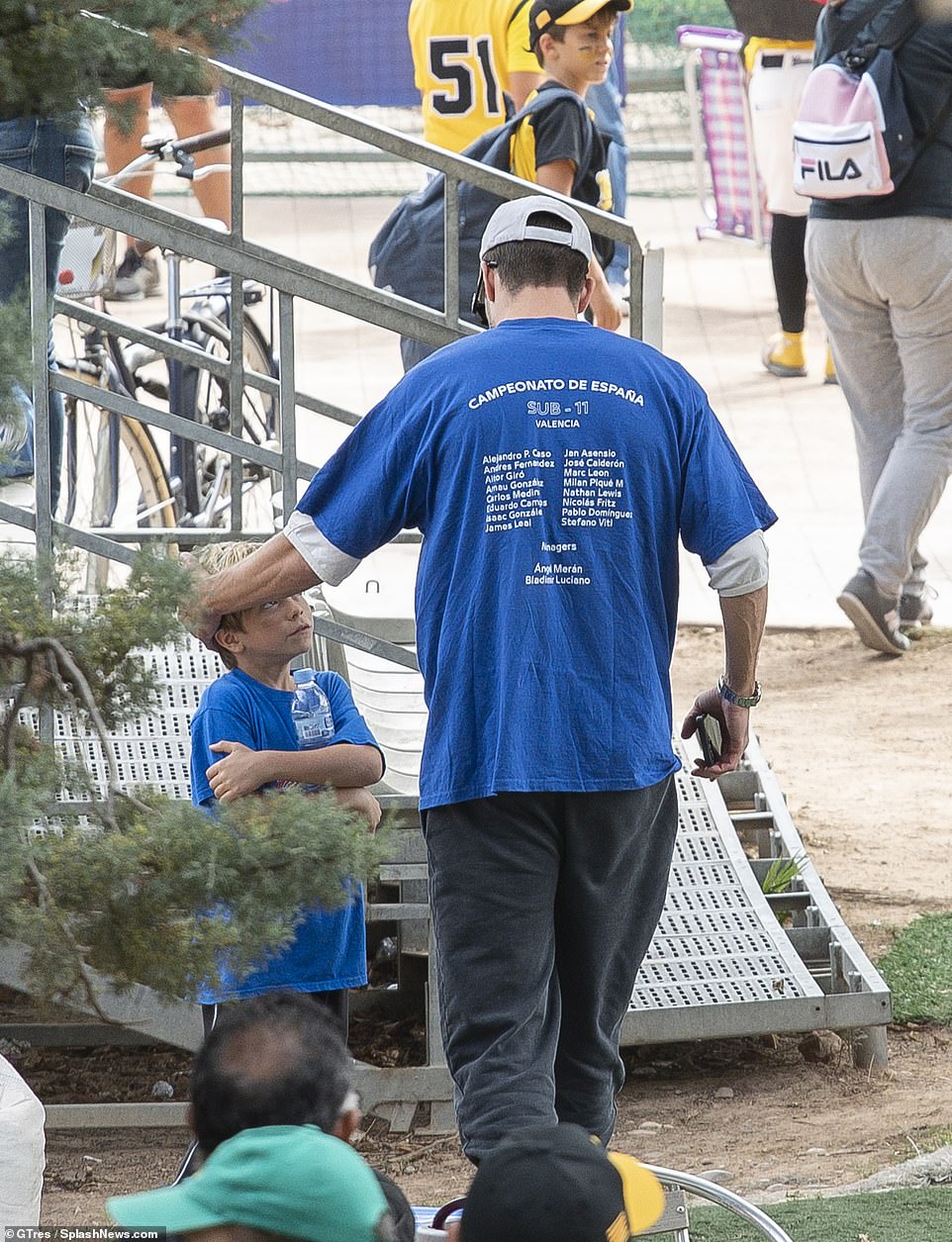 Showing his support: Pique, 35, opted a team T-shirt from their son’s baseball club that he layered over a long sleeved white top, but kept a low profile in a baseball cap and shades 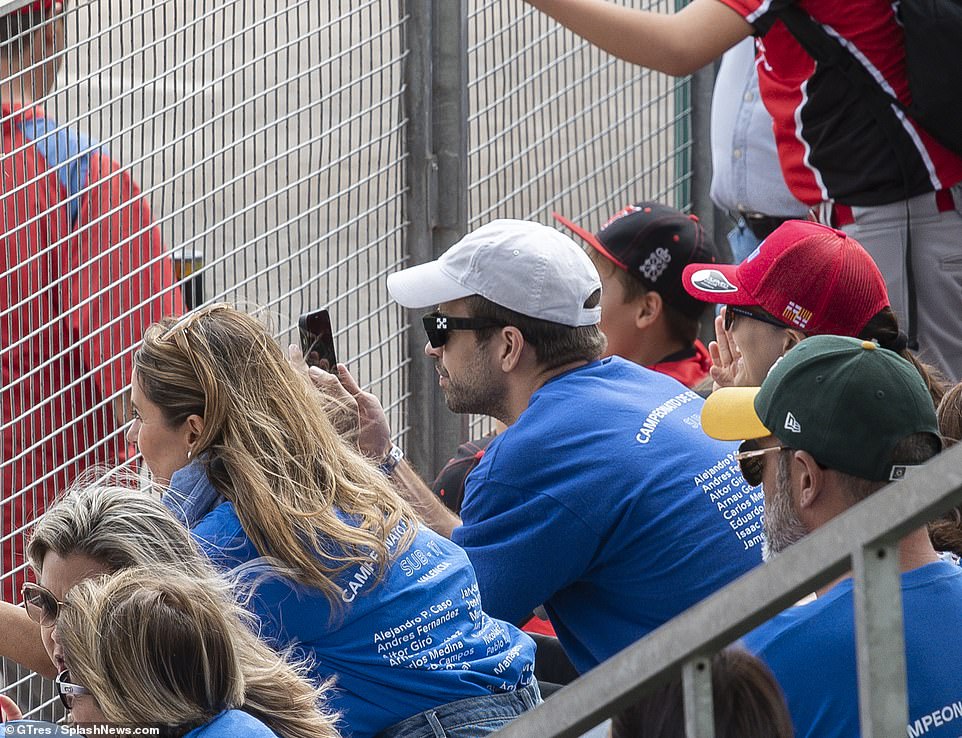 Texting his new love? Piqué is already is in a new relationship with 23-year-old PR student Clara Chia Marti many had wondered how it all ended

Last month there were images of Piqué passionately kissing his new love interest in a new video taken by Spanish media outlet Socialite at the Summerfest Cerdanya festival in Catalonia.

Shakira was asked how she came to understand that their long-term relationship was over but kept tight-lipped over her ex’s new romance as she said: ‘I think that those details are somehow too private to share, at least at this very moment—everything is so raw and new. I can only say that I put everything I had into this relationship and my family.’

She went on to talk about having a ‘nomadic life’ before their children started school and then settling down in Barcelona in favour of Piqué’s soccer career instead of moving to the US which was best for her music career.

The hitmaker explained: ‘And so, one of the two had to make that effort and that sacrifice. And I did it. I put my career in second gear and I came to Spain, to support him so he could play football and win titles. And it was a sacrifice of love.

‘Thanks to that, my kids were able to have a present mom, and I have this amazing bond with them that is unbreakable and that sustains us. You know, that is it. That’s all I can say.’ 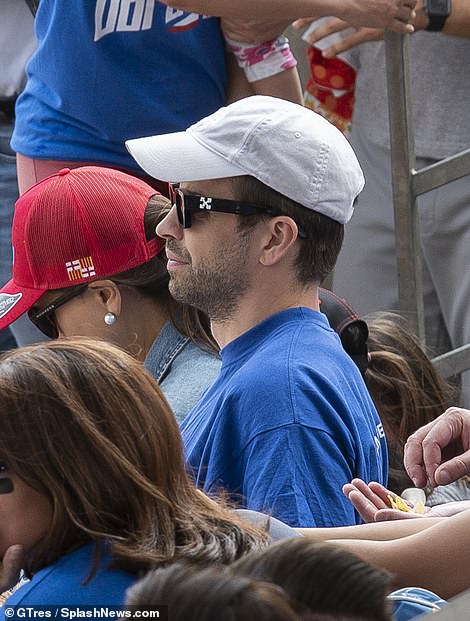 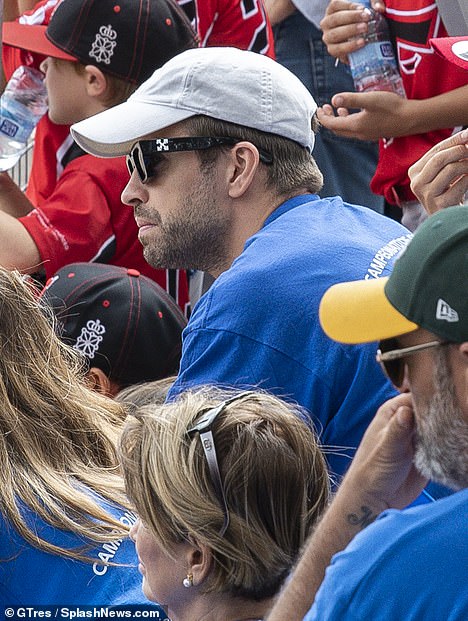 Sporting success: Milan no doubt gets his love of sport from his famous footballer father

Shakira also talked about how difficult it has been on she and her sons especially after her father was rushed to the hospital back in June after a ‘bad fall’.

She said: ‘Yeah. I try to conceal the situation from them as much as I can. It’s really upsetting for two kids who are trying to process their parents’ separation. And sometimes I just feel like this is all a bad dream and that I’m going to wake up at some point. But no, it’s real.

‘And what’s also real is the disappointment to see something as sacred and as special as I thought was the relationship I had with my kids’ father and see that turned into something vulgarized and cheapened by the media. And all of this while my dad has been in the ICU and I’ve been fighting on different fronts.

She went on to marvel at the resiliency of women before explaining that she needs to serve as a strong example for her kids.

‘And I want to be there, also, for all the people who have shown me their love and support. That is my biggest strength. That’s my most powerful engine right now.’

According to Spanish newspaper El Periodico, Shakira and Pique are trying to remain friends for the sake of their children, despite their relationship being strained.

The split announcement followed rumours in the Spanish tabloids that the couple were on the verge of breaking up with sources claiming he had cheated on the star.

Shakira’s statement at the time read: ‘We regret to confirm that we are parting ways. For the well-being of our children, who are our highest priority, we ask that you respect their privacy. Thank you for your understanding.’

Spanish outlet El Periodico reported that the couple have been living separately for a few weeks after Piqué was kicked out of the family home by the pop star.

According to sources, Piqué has since been living a ‘party lifestyle’ in a bachelor pad and enjoying nights out with his teammates.

Neither party has addressed cheating claims but journalist Emilio Pérez reported: ‘(Shakira) has made the decision to separate. That is so. It has happened.

‘That is why there is distance. Perhaps there is nothing left, but that (infidelity) has passed.’

The couple had been together since 2011, with the pair having met while filming the music video for her World Cup song Waka Waka the previous year. 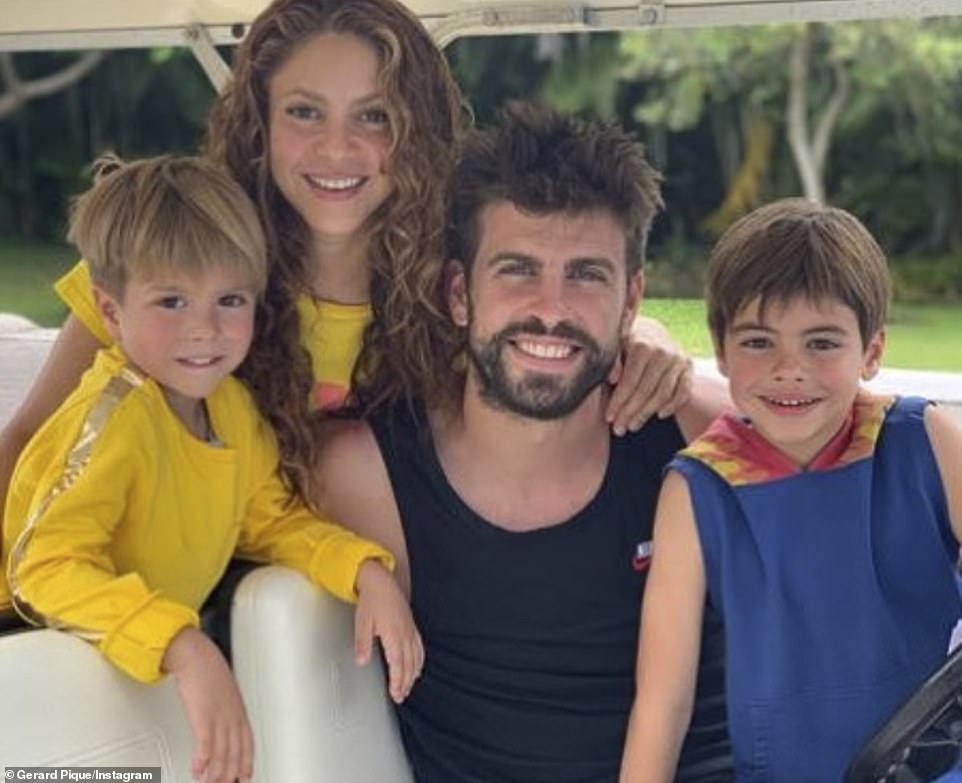