Manchester City moved to the top of the Premier League table with a fabulous 4-0 win over struggling Southampton as Erling Haaland scored again.

The Norway striker had spurned a series of good chances before finally finding the net for his 15th goal of the Premier League season – but by that point, the game had long since been won.

Joao Cancelo’s brilliant solo run started the scoring midway through the first half and Phil Foden added a second soon after with City utterly dominant. The returning Rodri set up Riyad Mahrez to make it three early in the second half before Haaland’s strike.

While the victory moves Pep Guardiola’s unbeaten side back above Arsenal into top spot, a fourth consecutive defeat only adds to the pressure on beleaguered Southampton boss Ralph Hasenhuttl.

Player of the match: Joao Cancelo

Cancelo and Foden star for City

The focus had been on Haaland beforehand given that he had scored hat-tricks in each of his last three Premier League appearances at this stadium but it was Foden who was the key protagonist in the first half, setting up the first and scoring the second.

The 22-year-old forward had been rested against FC Copenhagen in midweek along with Kevin De Bruyne and their return provided the impetus. Foden was actually fouled by Kyle Walker-Peters in the build-up to the opener but managed to get his pass away to Cancelo.

Pep Guardiola made three changes to the team that defeated Manchester United in the derby. Ruben Dias came in for the injured Kyle Walker. Rodri returned in favour of Ilkay Gundogan. Jack Grealish dropped to the bench with Riyad Mahrez coming in.

The Portugal full-back did the rest, turning James Ward-Prowse this way and that before sliding the ball into the net. He had been switched to right-back in the absence of Kyle Walker in midweek but whichever flank that Cancelo plays on he is a creative force.

The same can be said of Foden. The finish for his goal was even cuter, dinking the ball beyond Gavin Bazunu after being played in by De Bruyne. With so little being offered by Southampton at the other end, that all but ended the visitors’ hopes.

After the interval, it was the turn of Mahrez and Haaland – the two men who had been wasteful before the break. Firstly, Mahrez finished neatly from Rodri’s diagonal pass and then Haaland swept home after Cancelo’s clever one-two with De Bruyne.

The goal maintained Haaland’s outrageous scoring while heaping further misery on Hasenhuttl but perhaps the story of this game is that the striker’s goals were not needed. This was a team performance – and a reminder that they are still the team to beat.

Analysis: Haaland scores but others shine

Guardiola is having to get used to fielding questions about his new striker. In the build-up to this game, he was asked about a light-hearted petition to stop him playing in the Premier League. Even the club stuck him on the front page of the programme for this one.

Twenty goals in 13 games will do that, but this afternoon was a little different. Haaland hit the post from a one-on-one chance with the game goalless, missed his kick when it seemed easy to side-foot in and then failed to take the ball around the goalkeeper.

The supporters seemed a little bemused by it, so accustomed have they become to seeing him score. But it underlined the fact that even while Haaland dominates defenders and the media coverage, there is so much more to this side – and we saw that against Southampton.

Cancelo was the best player on the pitch, while Foden rivalled him until being withdrawn just before the hour mark. De Bruyne was magnificent. Manuel Akanji, playing out of position at right-back, has been a revelation since his own move from Borussia Dortmund.

Even Haaland’s goal highlighted that this is a team effort. There were 21 passes in the build-up to it – no goal has featured a longer passing sequence in the Premier League this season. The fascination with Haaland remains. But this is a formidable Manchester City team.

Guardiola jokes he is upset with Haaland 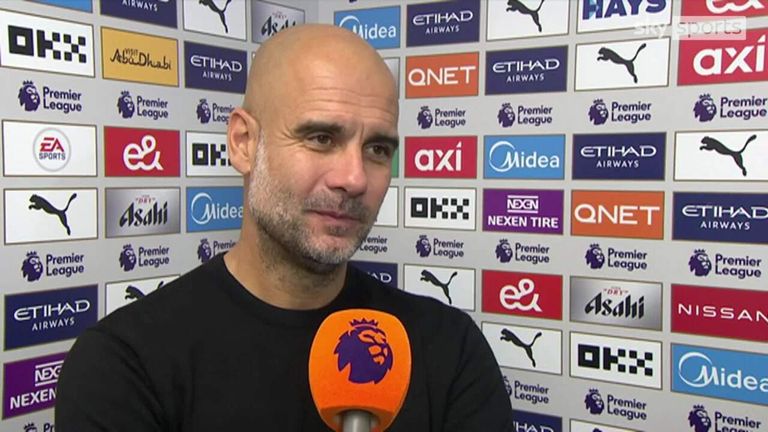 “I am so upset with him,” said Guardiola of his star striker in the press conference after the game.

“He did not score three goals. That is why the petition to sack him from the Premier League because he is a robot is not going to happen. It is nice.”

While the City head coach did say he “had a feeling people up front had to be more clinical, we could have scored more” he also acknowledged expectations of Haaland are sky high – hence the stunned silence after his first-half shot struck the post.

“Expectations of him are so high than people expect he is going to score three or four goals but at the end he was there scoring. He helped us again, he keeps the ball and fights. I think Erling played really good today too.” Southampton boss Ralph Hasenhuttl believes his side conceded too soon against Manchester City and feared that once they scored their first, confidence would grow and be damaging for the Saints

Asked if there was any clarity about his own future, Hasenhuttl said that “after this game, I have no clarity” but he was clear about the experience of facing Haaland – and he explained that the mere presence of the striker changes the challenge for his defenders.

“The problem is that even if he is not immediately scoring you have to be aware of him and then the centre-backs are a little bit more fixed in the centre and they cannot slide so good. I think this then makes it a little bit harder for us then to press.

“We had, in the first half, two things where we did not slide and they played so quick and there is immediately a big chance. It makes it harder for sure because you have such a fantastic striker in the middle and it is then easier for everyone around hm to shine.”