Bournemouth scored two second-half goals in the space of four minutes through Philip Billing and Ryan Christie to complete a thrilling 2-1 comeback win over Leicester City.

Christie had earlier wasted a golden chance for Bournemouth, who were being watched from the stands by prospective new American owner Bill Foley, but Billing hauled the hosts level (67) before Christie latched onto Dominic Solanke’s cushioned header to complete the turnaround (71).

The result means Bournemouth rise to eighth in the Premier League on 12 points while Leicester remain rooted in 19th position after a fifth consecutive away league defeat of the season.

When asked if he felt under pressure, Brendan Rodgers said: “It’s not about pressure. I know if you’re in the bottom three, there will always be pressure – I understand that. For me though, it’s about focusing on the process of getting the results. Ultimately we lost this game but we’ve got two home games and we really need to focus on them.”

Player of the match: Ryan Christie.

Gary O’Neil’s side are now unbeaten in his five games as interim boss and his call for togetherness between players and supporters was met in emphatic fashion here as a first home win since the opening-day victory over Aston Villa was registered.

“The boys put in another top effort,” O’Neil said afterwards. “It was harsh at half-time to be 1-0 down as we’d played well and had big chances but got punished from the only real one Leicester had.

“I told them we needed to believe and keep going. We tweaked a couple of things at half-time to be slightly more aggressive. It went our way in the end and I am really pleased. It’s an incredible group and it’s a privilege to manage them.”

The Cherries, bidding to avoid a hat-trick of home goalless draws, were boosted prior to kick-off with news that Las Vegas-based businessman Foley had completed his takeover subject to Premier League approval.

Bournemouth made a bright start with Christie failing to capitalise on a slip from James Justin inside four minutes. O’Neil’s team were duly punished not long after when Daka swivelled to convert from close range.

Youri Tielemans’ teasing cross was kept alive by Barnes, and after his shot deflected back into the path of Daka via the shin of Jefferson Lerma, the Zambia striker collected the early gift on the eve of his 24th birthday.

At that point, you did not really see Bournemouth staging the sort of valiant fightback which followed after the restart. Rodgers made a double change as Jamie Vardy and Daniel Amartey replaced Timothy Castagne and Daka departed.

The disruption to the defence contributed to a loss in concentration as Bournemouth seized the initiative. A quick throw in released Solanke away from Wout Faes and after his initial shot was blocked, Billing readjusted his feet to rifle a first-time effort beyond Danny Ward and into the roof of the net.

The Wales goalkeeper had barely had to field dribblers up to that point, but he was picking the ball out of his net once more less than four minutes later.

This time, the move came down the left flank as Billing’s cross was nodded down by Solanke and Christie – who scored 11 goals in 42 appearances under Rodgers at Celtic – kept his cool to divert his finish under Ward. 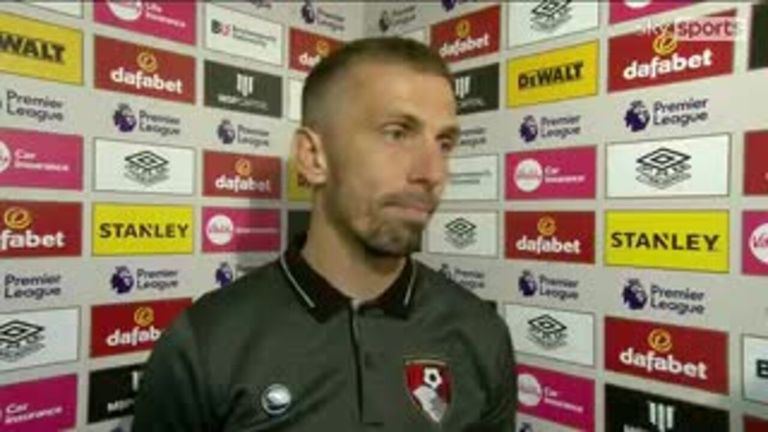 Gary O’Neil picked up his first home win in charge at Bournemouth as they defeated Leicester 2-1 on the Cherries’ 100th Premier League game.

“I think the boys believe. I don’t think you can come back from two down at Nottingham Forest and 1-0 down to Leicester if you don’t believe. You need to be sensible as newly-promoted team. We were slightly less sensible in the second half and it went our way.”

On the prospective new owner Bill Foley in attendance: “It’s a great first day for him and I’m sure he enjoyed it. The full focus for me though is on prepping for the next one.” 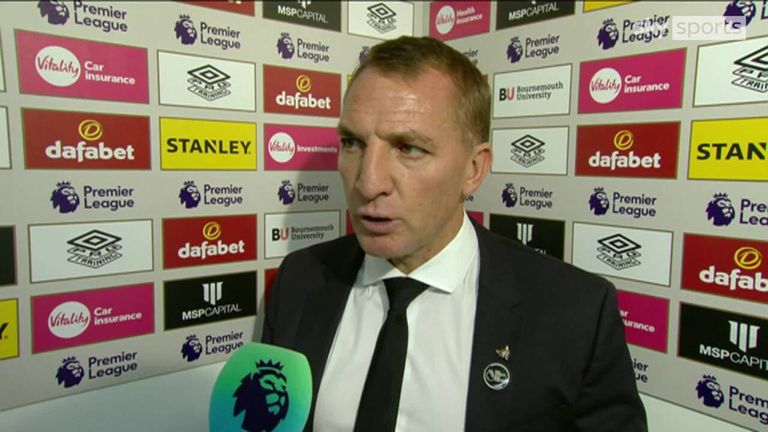 Leicester boss Brendan Rodgers feels his side were too ‘safe’ in the second half and ultimately their own errors cost the Foxes all three points as they lost 2-1 at Bournemouth.

“It’s a really disappointing result for us. We controlled most of the game in the first half but maybe we got too comfortable and you cannot get comfortable in this league. In the second half, we weren’t aggressive enough and that invites pressure.

“It was great against Nottingham Forest on Monday where our play had everything in it that we want: intensity, pressure, aggression, desire.

“The players’ attitude was good in this game but technically we weren’t right, we misplaced too many passes and made mistakes. We never did enough against the ball or with the ball.”

Analysis: Where did Leicester go wrong?

“The disappointing aspect from Leicester’s point of view is that they looked really comfortable for large periods of this game. As soon as Bournemouth got the first goal, they simply folded. There’s no other way to describe it. You could see it in the body language of the players and the confidence was just draining away from them.

“We’ve spoken before about a lack of leadership since Kasper Schmeichel left, and after a really positive result in which they may have felt they’d turned a corner they produce this.

“They’ve had a tough start to the season in terms of fixtures so you could have given them some leeway but with the run of games they have now, there’s no excuses for how it unfolded.

“They’ve got Crystal Palace, Leeds and Wolves to come and they’re games they need to be getting points in. But if they can’t keep a clean sheet, they’re not going to win any games.”

O’Neil can do no more for permanent role

“Bournemouth deserve due credit for the manner in which they dug this out. Christie was the match-winner for Rodgers as Celtic lifted the 2018 Scottish League Cup, the last of his seven trophies at the club.

“Rodgers knew all about his ability, and having been recalled to Bournemouth’s starting line-up here by O’Neil, he repaid his manager’s faith with a lively appearance that was capped with a confident finish.

“It felt like it would be another case of there being no lack of endeavour but no end product from the hosts but like London buses, two goals came along at one. Virtually everyone had Bournemouth as nailed on to go down but they continue to confound their critics. Surely O’Neil must now be given the chance to lead this group on a permanent basis.

How long can Leicester go on performing like this? Five away Premier League defeats to start the new campaign and 19 goals conceded. The Foxes have now dropped 30 points from winning positions in 2022 – 13 more than anyone else in the Premier League. It’s unthinkable.

You could make excuses for them to some degree during a wretched run of fixtures which has seen them face five of the top six, but not for this. On the evidence at Bournemouth, Leicester are not in a false position because without leadership in this league, away venues can be a very lonely place.

The last time Leicester lost a Premier League game when winning at half-time was here at Bournemouth in July 2020, when they ended up being thumped 4-1. Not long after, Bournemouth were relegated but it was a defeat which came as a hammer blow to the Foxes’ hopes of clawing a Champions League berth.

How times have changed.

Player of the match – Ryan Christie 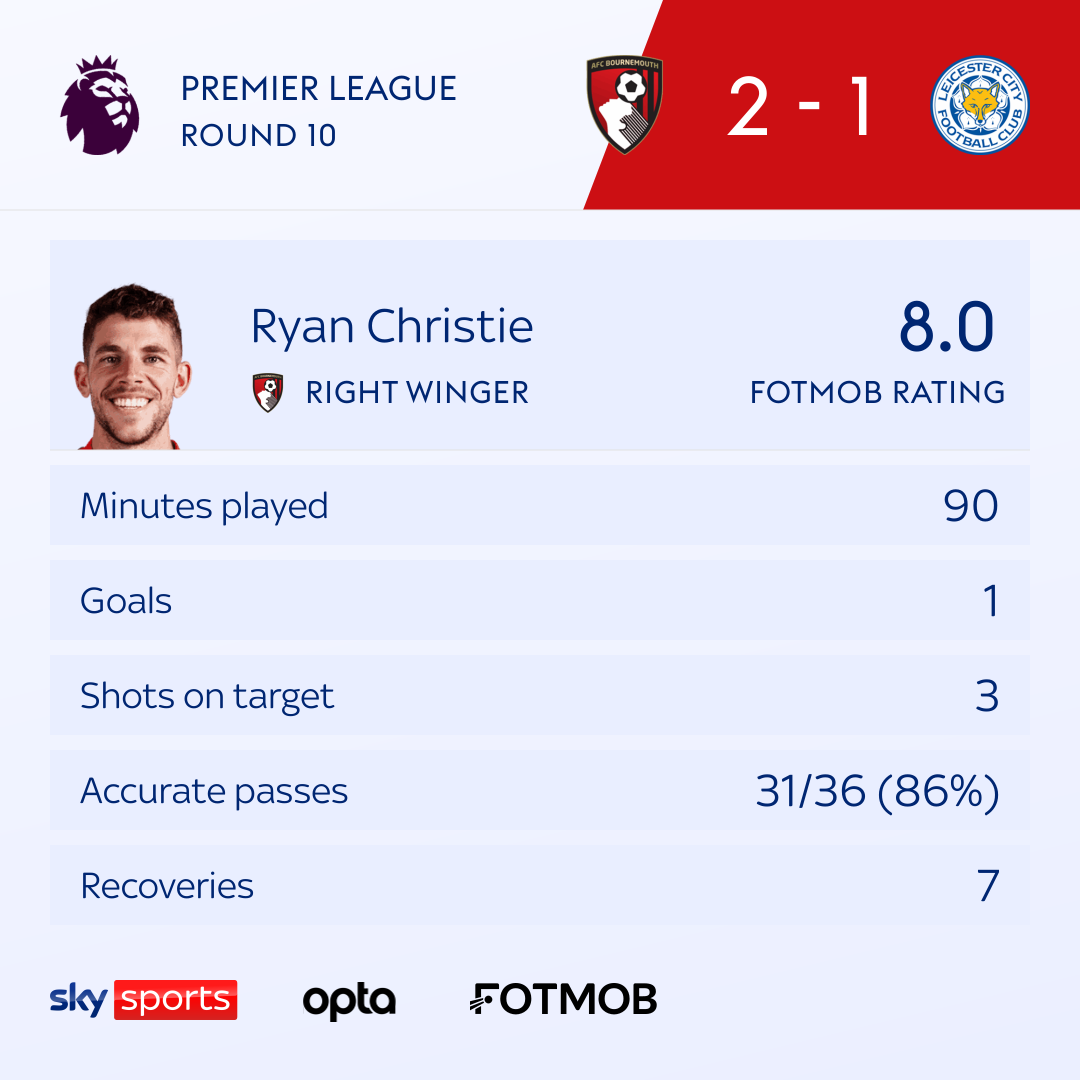 Christie’s winner for Bournemouth was his first Premier League goal, with all four of his league goals for the Cherries coming at the Vitality Stadium, having scored three times in the Championship last season.

James Maddison was mustard against Nottingham Forest on Monday, but here he struggled to provide the same swagger against a Bournemouth side who did a fine job of restricting the space in much the same way they did to Ivan Toney a week ago.

The in-form playmaker has been directly involved in 19 Premier League goals in 24 appearances during 2022, but he was limited to a couple of half chances of his own making, cutting inside from the right during the second half to have one effort blocked while a speculative 30-yard free-kick was easily kept out by Neto.

Maddison’s only England cap came three years ago, but he feels if he continues to play in his recent rich vein, a spot awaits him at the World Cup irrespective of Gareth Southgate’s apparent reluctance. Time is running out, however.

The deadline for Southgate to name his squad is October 19. The World Cup begins on November 20, with England’s first game against Iran on November 21.

Bournemouth travel to Fulham on October 15 before they host south-coast rivals Southampton on October 19.

Leicester are at home to Crystal Palace in the early game on October 15; kick-off at 12.30pm. They then host Leeds on October 20.