“Tonight was the least compact performance I saw for a long, long time from us.”

Jurgen Klopp could not have spelled out one of the biggest problems his side had against Napoli any clearer.

The issues behind Liverpool’s poor start to the season run deep, but the defensive high line, which has become a trademark of Klopp’s time at the club, was repeatedly exposed by the energetic Italian side.

“We were miles too open, we can’t come to a place like this and not be compact,” left-back Andy Robertson concluded post-match.

Time and again Napoli ripped through a Liverpool side that was overrun in midfield and a defence that looked unorganised. For years, Liverpool have trodden a tightrope, playing a high-risk offside trap to keep their shape compact and dominate territory, ensuring the game is played as much as possible in their opponents’ half of the field.

It is a risk and reward strategy. When it hasn’t worked on occasions, it has been questioned by pundits and supporters alike, but Klopp has stuck to his philosophy. “We want to attack the opponent non-stop. When we have the ball, when we lose it and when the opposition have it,” he said last season.

It is easy to point the finger at the defenders tasked with playing the opposition attackers offside, but the elements in the lead-up to that situation are just as, if not more, important.

Key to those situations is the midfield, who play a crucial part in the intensity and pressing Klopp wants. It has been a major problem, with injuries decimating the ranks. Alex Oxlade-Chamberlain was ruled out in pre-season while Naby Keita, Jordan Henderson, Curtis Jones and Fabio Carvalho have joined him on the treatment table since the season began. Thiago has just returned after a month out.

As a result, chopping and changing has been frequent. Liverpool have started five different midfield combinations in their opening seven games. Fabinho and Harvey Elliott have started six, James Milner three, Henderson three and Fabio Carvalho and Thiago one apiece.

The 36-year-old Milner should not be starting in Liverpool’s midfield regularly, illustrated by him struggling to handle the pace and tempo of Napoli. Elliott has been a stand-out performer so far, but he is not a complete Klopp midfielder yet; he is young and still learning the role both with and without the ball. Behind them was Fabinho, who is one of a number of elite personnel playing nowhere near the high standards they have set previously.

It has looked as disjointed as it sounds.

The second penalty Liverpool conceded against Napoli provided a snapshot of the problems being out of shape can cause.

As Napoli look to advance the ball up the pitch, the image below shows Liverpool’s three midfielders standing next to each other and Andre-Frank Anguissa in plenty of room to receive the ball and drive into space. 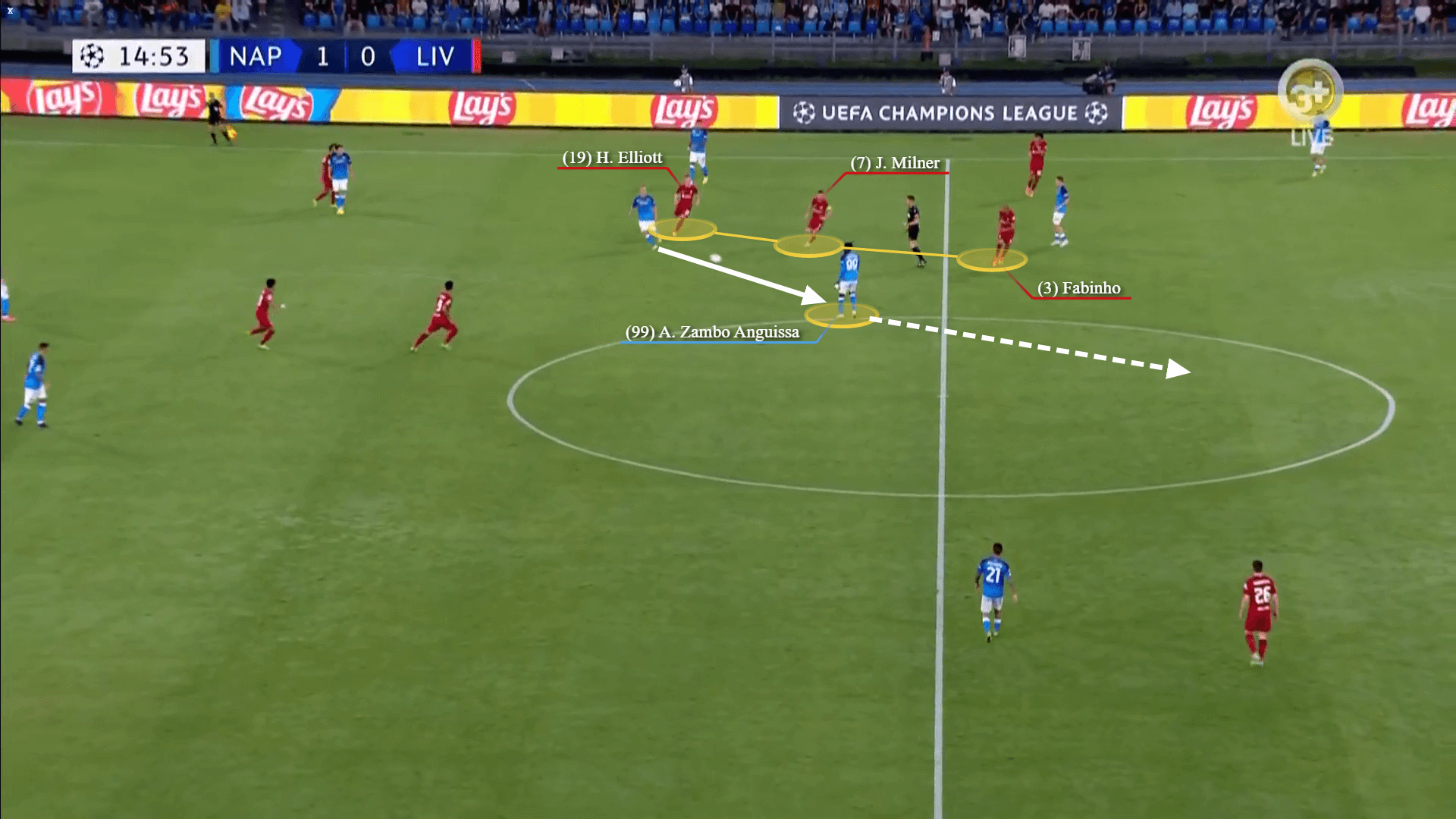 Victor Osimhen begins to make a run and Virgil van Dijk matches it but, because Anguissa has so much time, he can aim his pass to give the advantage to the forward. 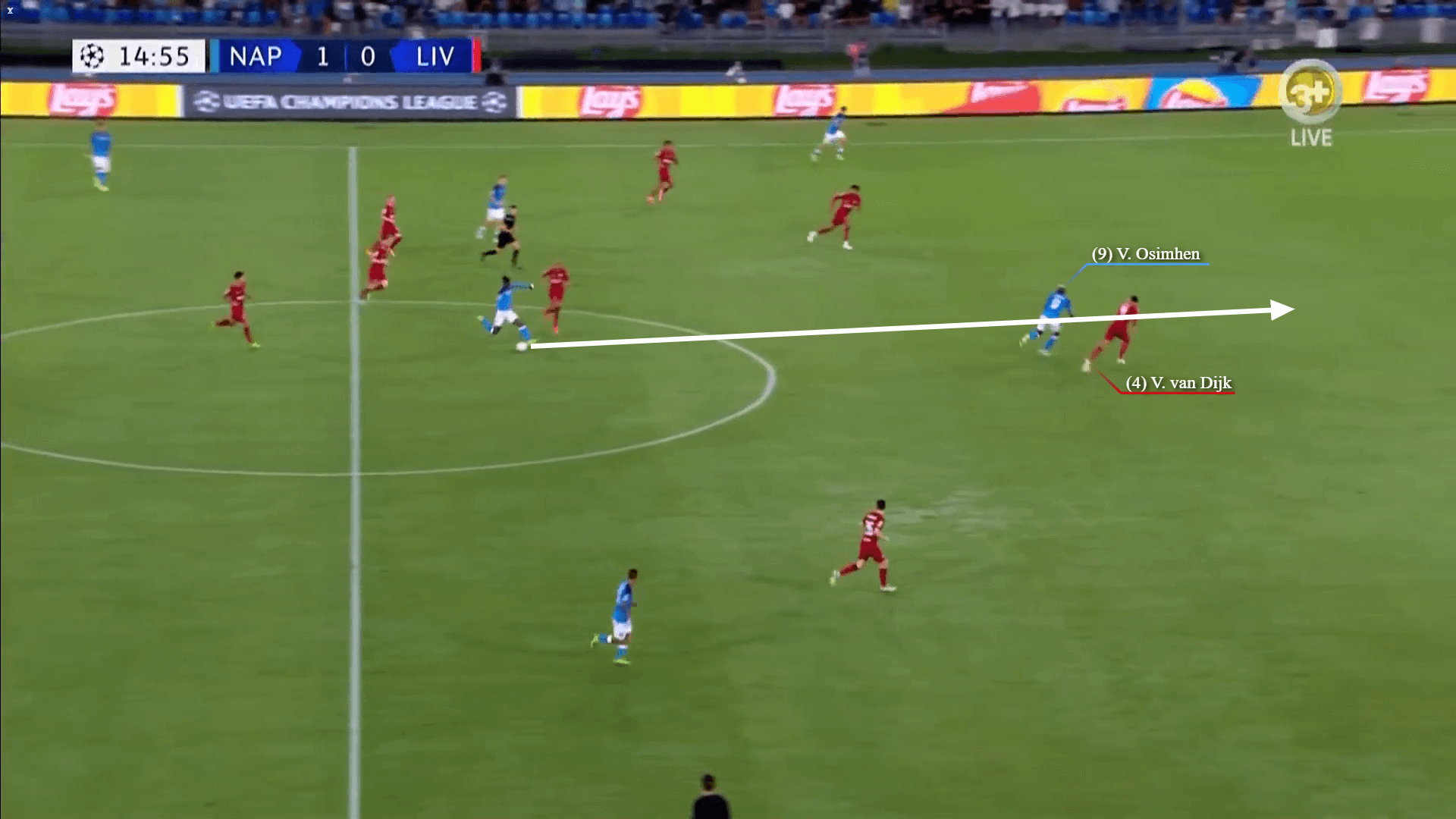 Osimhen is quick and is brought down by Van Dijk in the box. 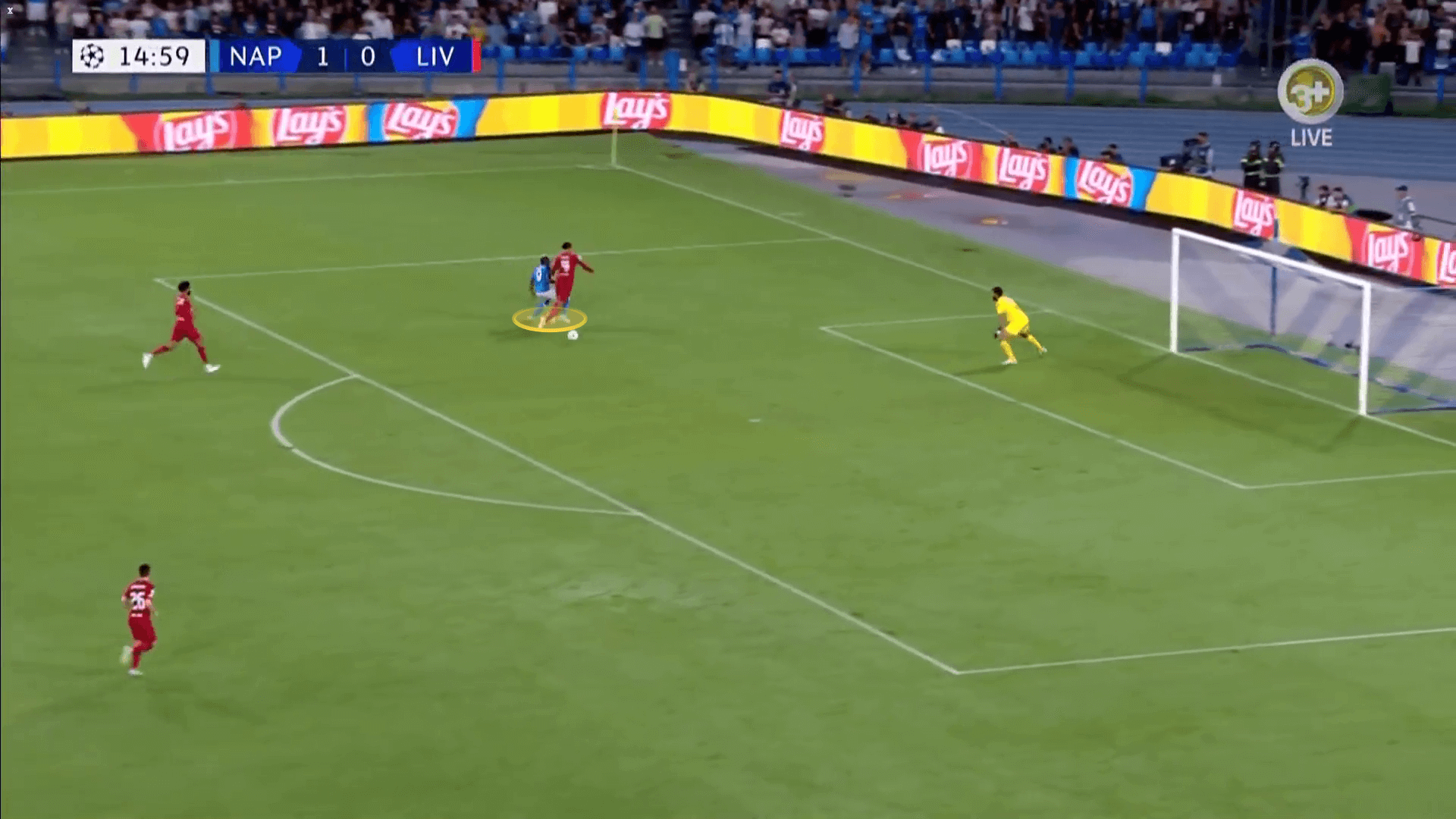 Before that, in the opening 45 seconds of the match, the home side had already exposed Liverpool’s back line and it stemmed from the lack of pressure on the home side.

Stanislav Lobotka was a thorn in Liverpool’s side throughout.

In this example, he finds space to pick the ball up from his centre-back. 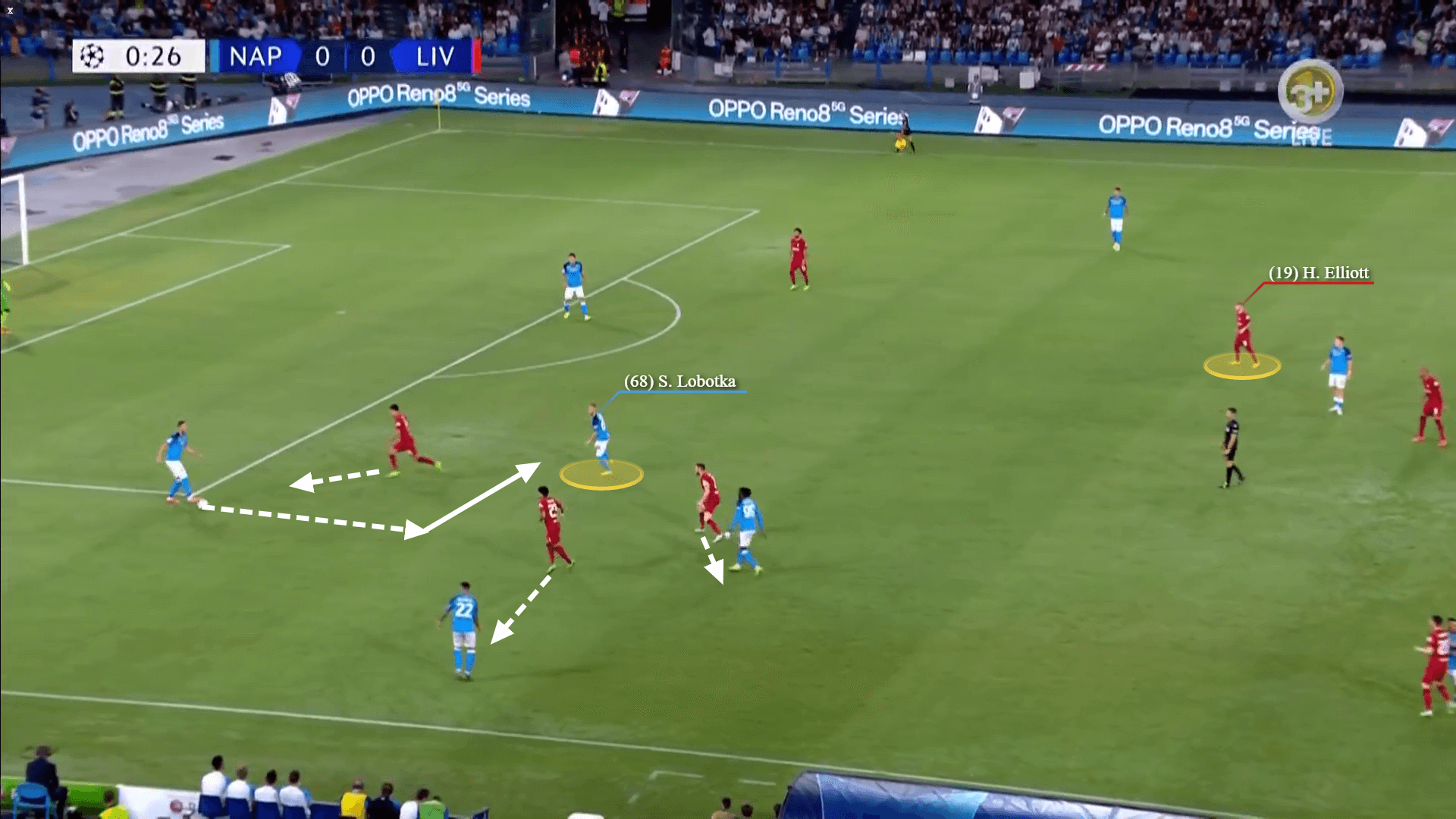 As Milner moves to press, Piotr Zielinski offers for the ball but is not closed quickly by Fabinho or Elliott. 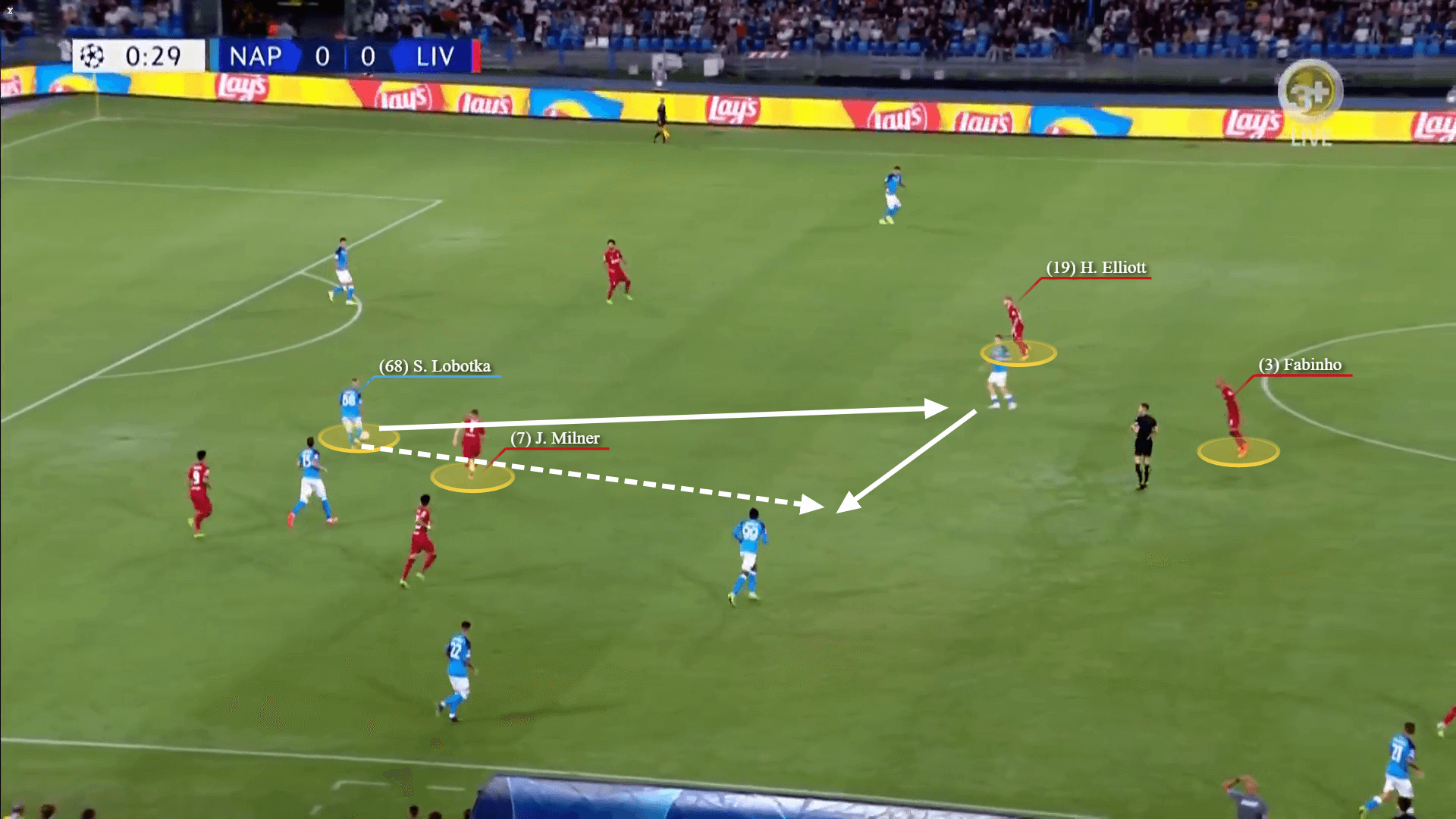 He receives possession and plays a return pass to Lobotka, who drives past Milner into space.

Luis Diaz moves inside to cut the pass to Anguissa, who is in space and would be able to turn, but that leaves right-back Giovanni Di Lorenzo in lots of space on the right. 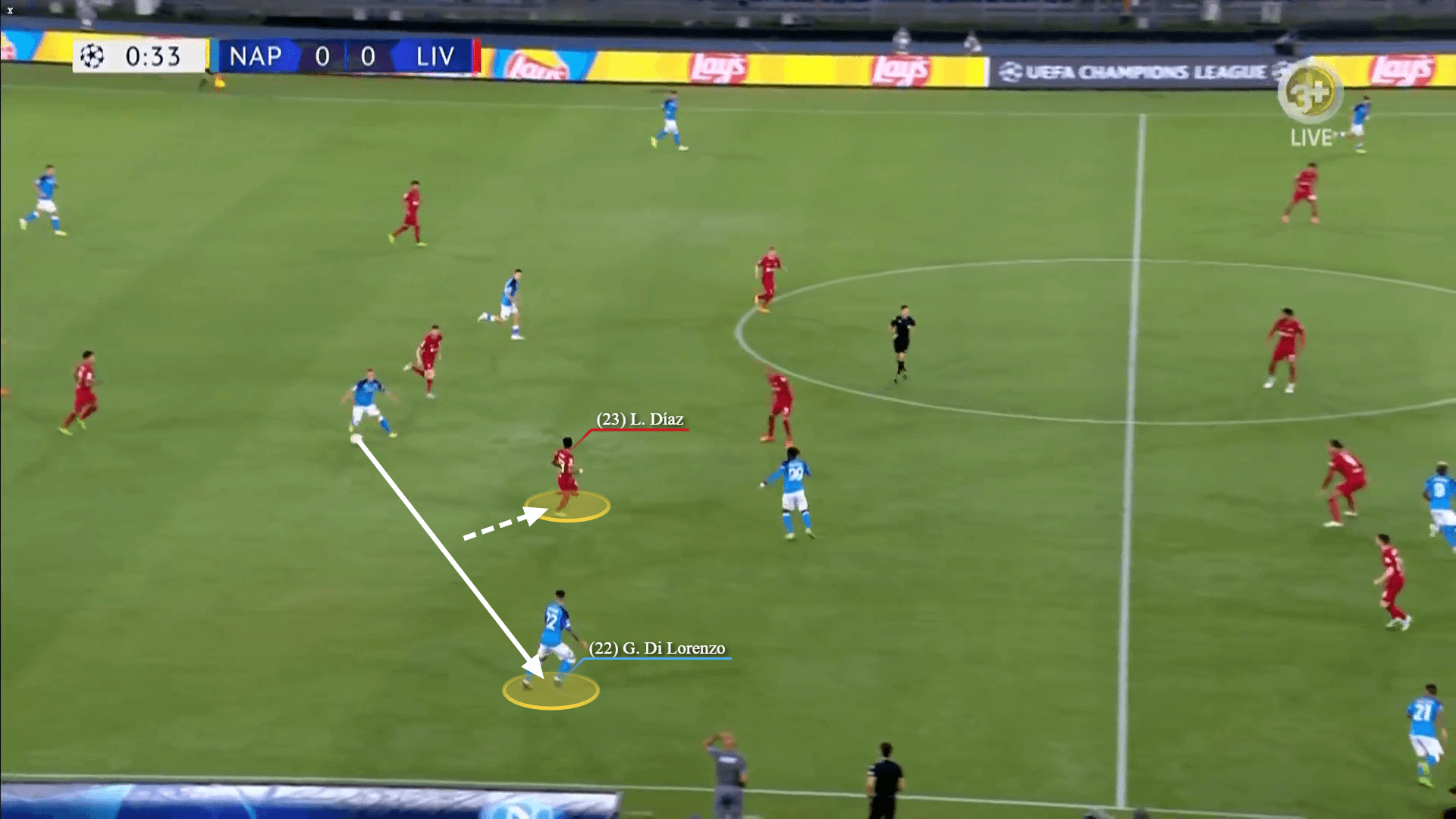 When he receives possession, Osimhen begins to make his run in behind.

Joe Gomez tries to step up and hold the line to catch him offside, but it is too late. By stopping rather than going with the runner, Gomez is left trailing. 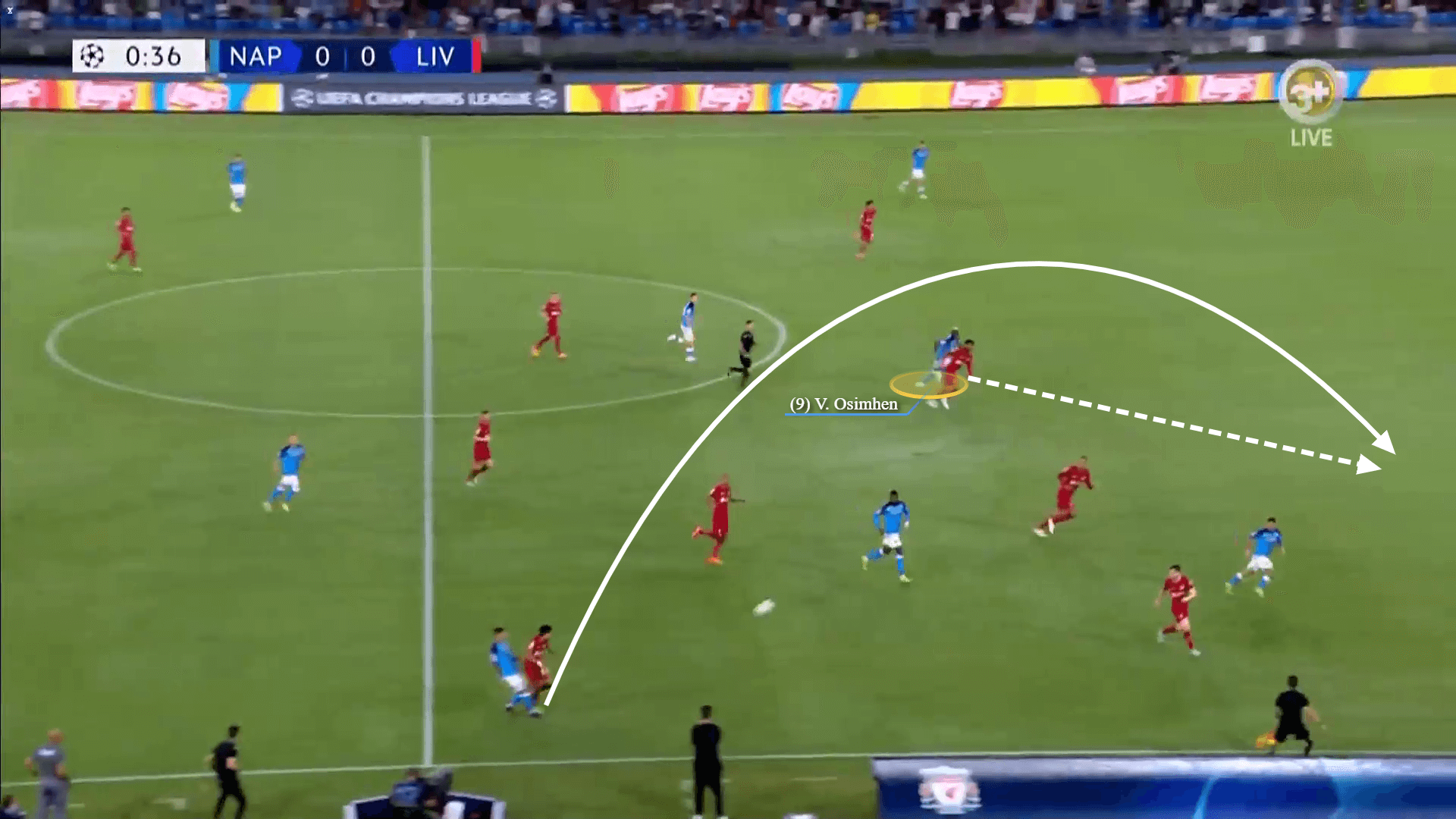 It gives Osimhen the speed advantage and he beats Alisson to the ball, taking it around him but hitting the post. 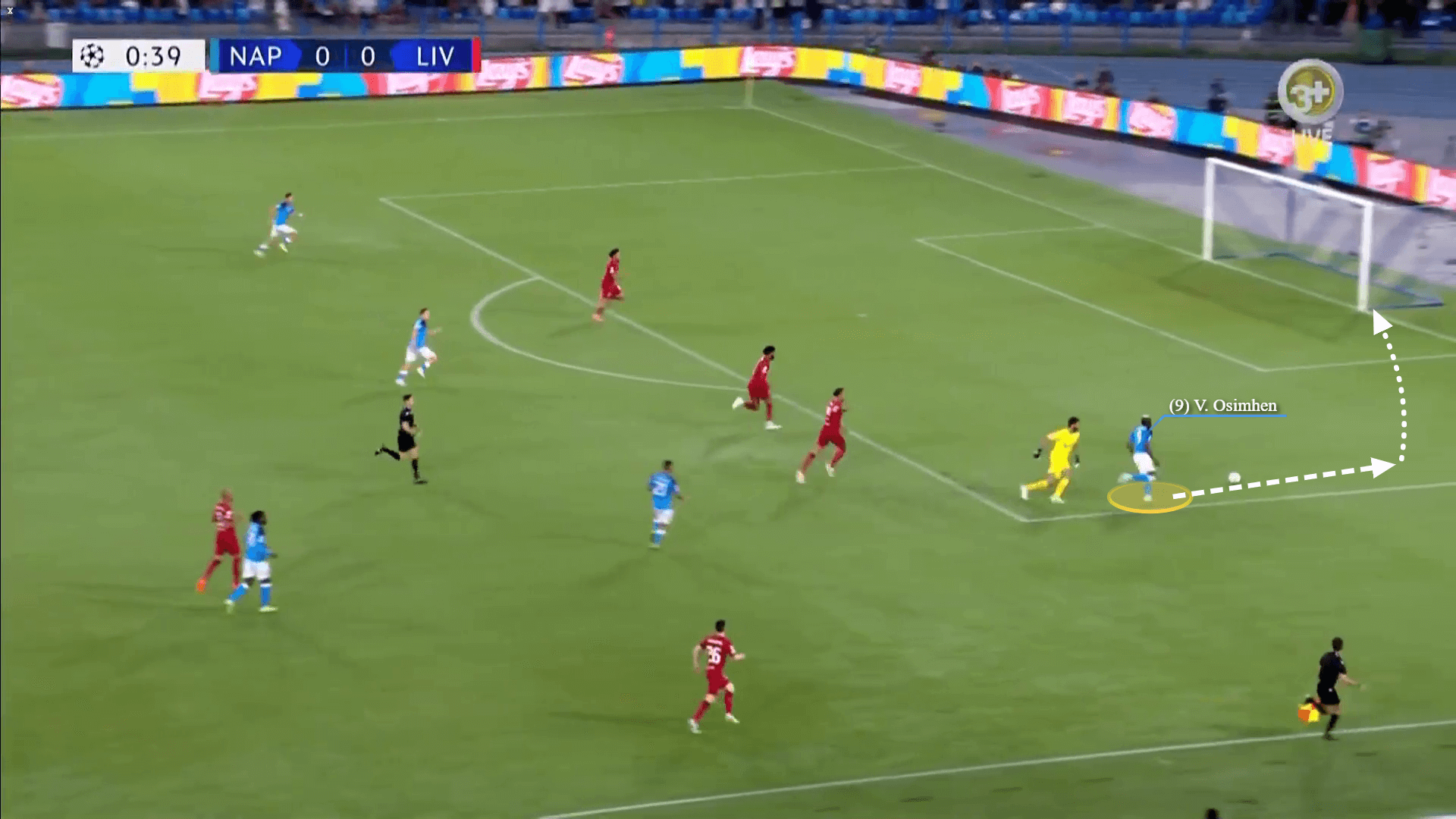 Alisson is a key part of the high-line strategy because he is so comfortable with the ball at his feet. The Brazil keeper reads danger and is quick to come off his line to deal with passes played over the top of Liverpool’s backline. However, on this occasion, he didn’t get there first. Klopp’s thinking is that with Van Dijk’s recovery pace and Alisson acting as a sweeper keeper, it should be difficult for teams to both time their runs and produce the weight of passes required to exploit the high line, but in Naples, it was alarmingly straightforward.

It continued to happen throughout the first half. Liverpool’s midfield were unable to contain Napoli’s passing and off-the-ball movement, which allowed them to bypass the press and have time to pick out the attacking runs.

The fourth goal, early in the second half, develops in the same way.

Napoli work the ball out to Di Lorenzo, who is under no pressure. He slides it inside to Anguissa who can direct a ball over the top of the Liverpool defence. 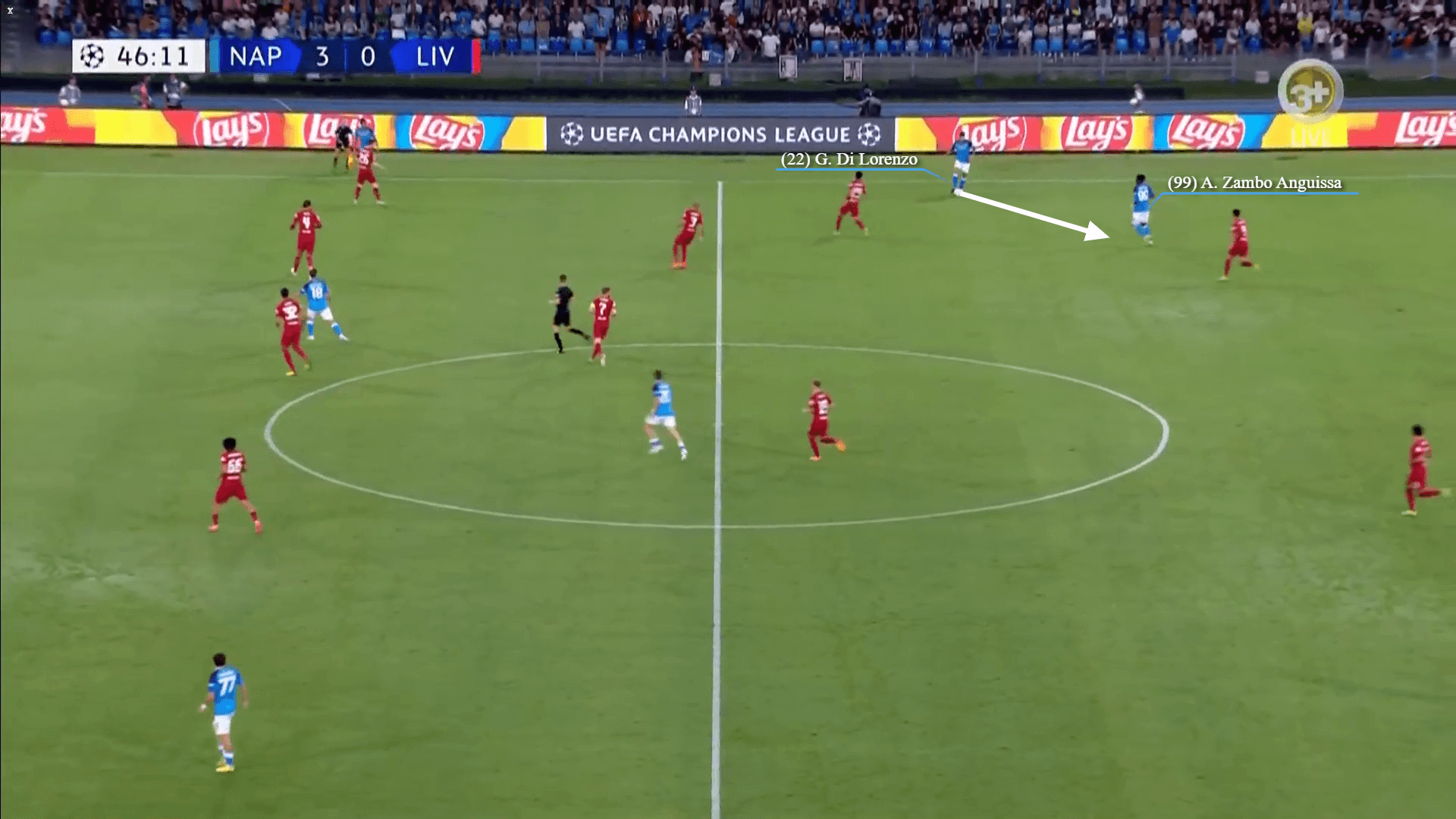 Giovanni Simeone is alert and has started his run before Liverpool’s defence who, barely even attempting to play offside on this occasion, have begun to drop. It is also important to notice Zielinski’s deep run, which is not tracked by the midfield. 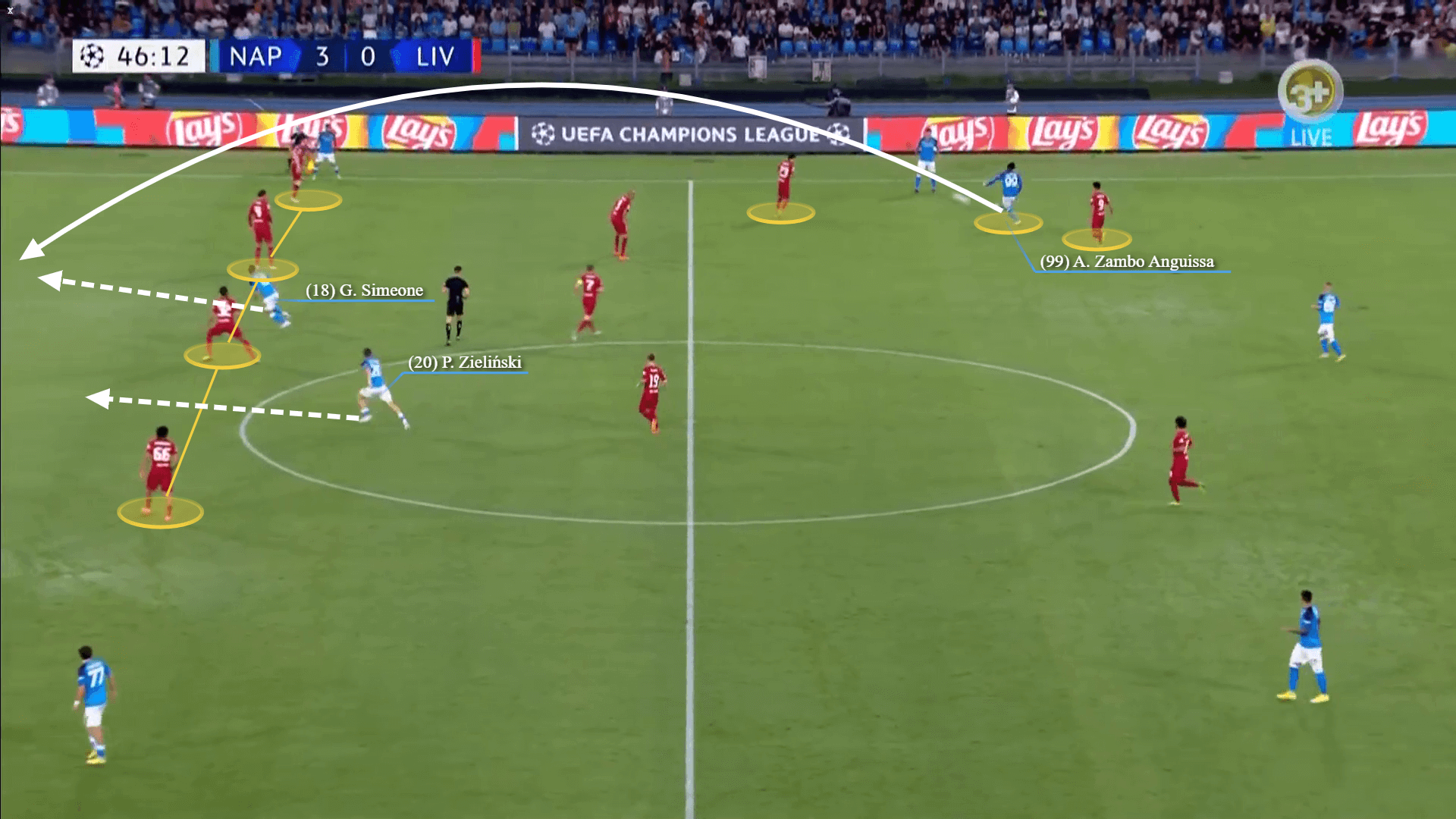 Simeone has the simple task of squaring the ball to his team-mate, with Trent Alexander-Arnold covering too late, and Zielinski finishes at the second attempt.

Former Liverpool defender Jamie Carragher in his role as a pundit for CBS Sports described it as “suicide football” from Klopp’s men. He’s adamant that, defensively, they have to be more pragmatic at times with the back line dropping off.

“Liverpool play a high-risk game but they aren’t pressing and that’s causing them problems,” he said. “It’s too easy to get through Liverpool’s midfield. If you’re not compact then you have to adapt.

“You can’t put the brakes on (and play offside) when someone has time to get their head up (and play a through ball). All I’m talking about is five yards, not retreating 10 or 15. What I’m saying is be ready to go rather than putting the brakes on and then trying to chase back. Liverpool have built their success on intensity on the ball. That energy isn’t there now so that back four has to adapt and go back.” 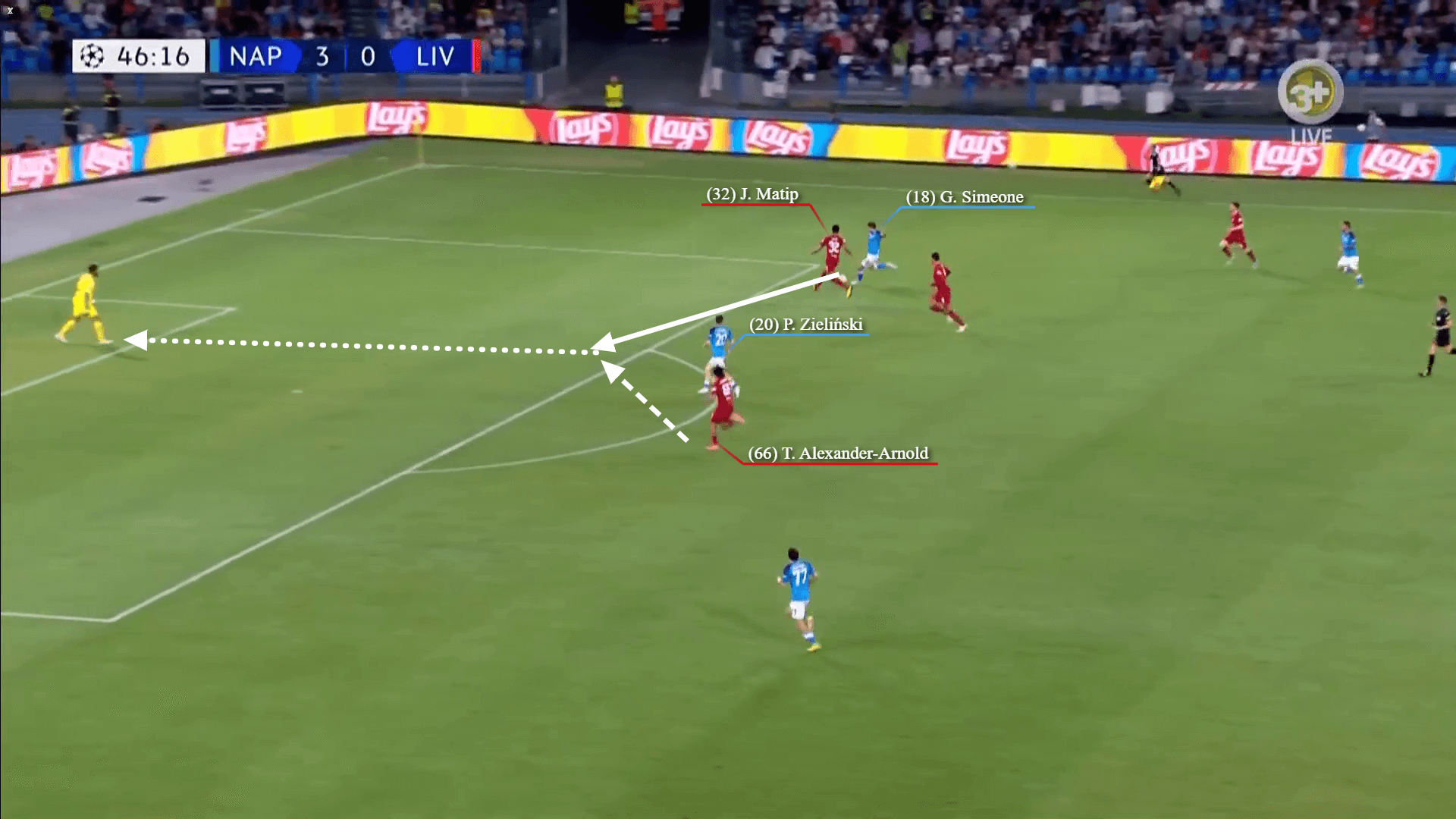 From studying Fbref.com, we can see how some of Liverpool’s best tendencies have decreased. Klopp’s side topped the Premier League rankings for number of pressures on the opposition in the final third in 2021-22, averaging 44.8 per 90 minutes. This season, it has decreased significantly to 32.8; currently the eighth highest.

Liverpool actually top the charts for press success rate, which is defined by Fbref as winning possession within five seconds of a press being applied, at 39 per cent up from a joint second-best 32.3 in the previous campaign.

While the small sample size of this season must be considered when looking at statistics, it suggests when Liverpool are getting their press wrong, they are being punished more often.

Crucial to the high line is playing opponents offside, an area Liverpool have excelled at. In the Premier League last season, they caught their opponents offside a league-high 144 times, 50 more than second-place Manchester City. They were catching opponents offside on average 3.69 times per game. That has also dropped this season to 2.67, although this is still the second highest rate in the division.

Evidently, it is not working as efficiently as last season, which can point to a lack of organisation. Along with the midfield, Liverpool’s right centre-back position has also been an area of change with Joel Matip, Nathaniel Phillips and Gomez all partnering Van Dijk this season.

The consistent presence has been Van Dijk and assistant manager Pep Lijnders has spoken in the past about the Dutchman’s speed and ability to read the game, which enables them to play such a high line. The 31-year-old’s form being one of the biggest question marks so far this season emphasises the issues further.

“If you play with a high line, if you play with a lot of space at your back, if you want to keep the opposition far away from your own goal, you need speed in your last line. And we have four players with real speed,” said Lijnders last season.

Dropping the line doesn’t happen often. Wilfried Zaha’s goal at Anfield comes from the opposition beating the press on the man in possession, which in this case is Fabinho on Eberechi Eze. 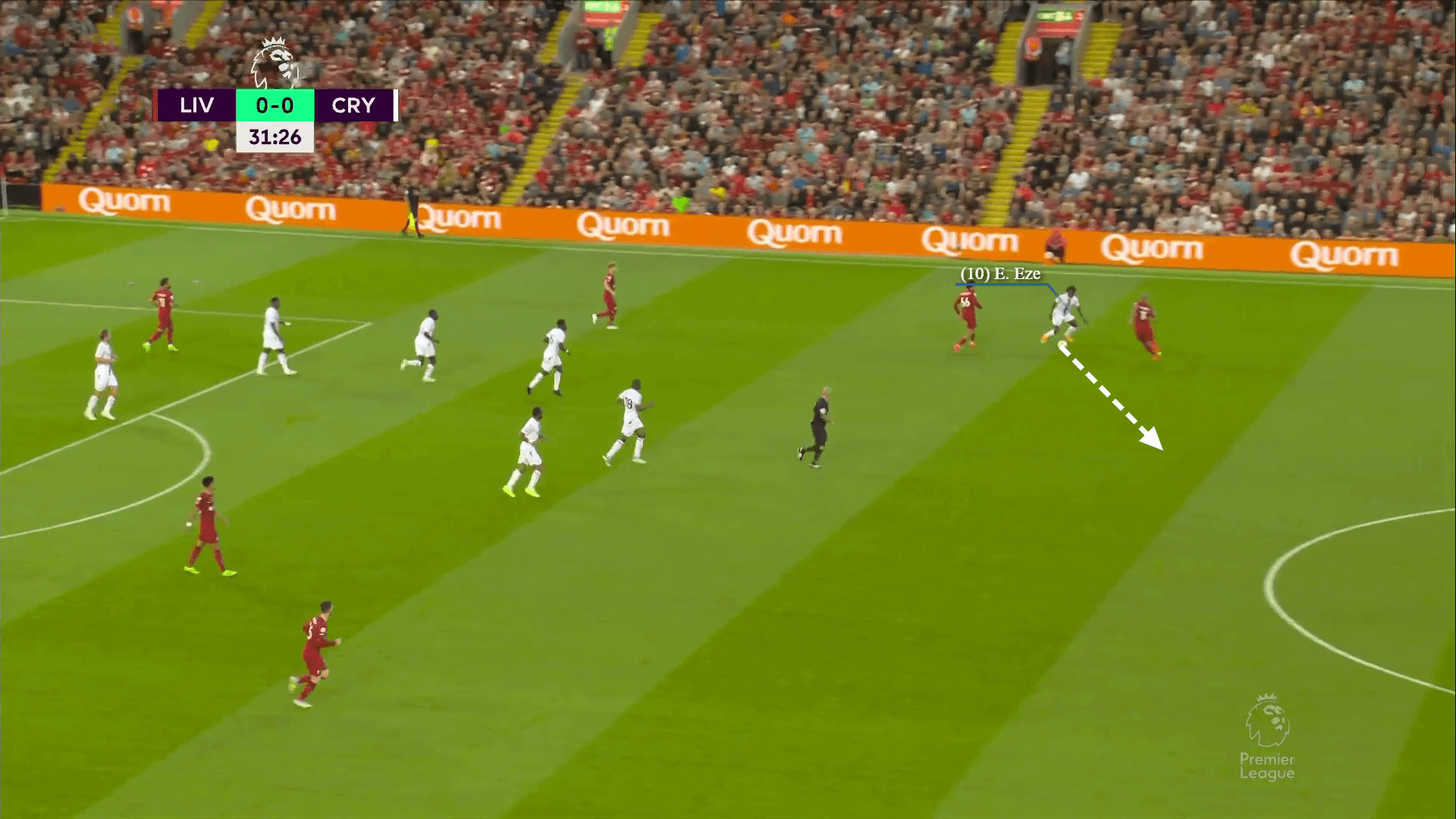 He skips past Fabinho and into acres of space, giving him time to pick his pass. Instead of Liverpool’s two central defenders dropping, Phillips faces the ball and tries to play offside. It did not work and Zaha gave Crystal Palace the lead. 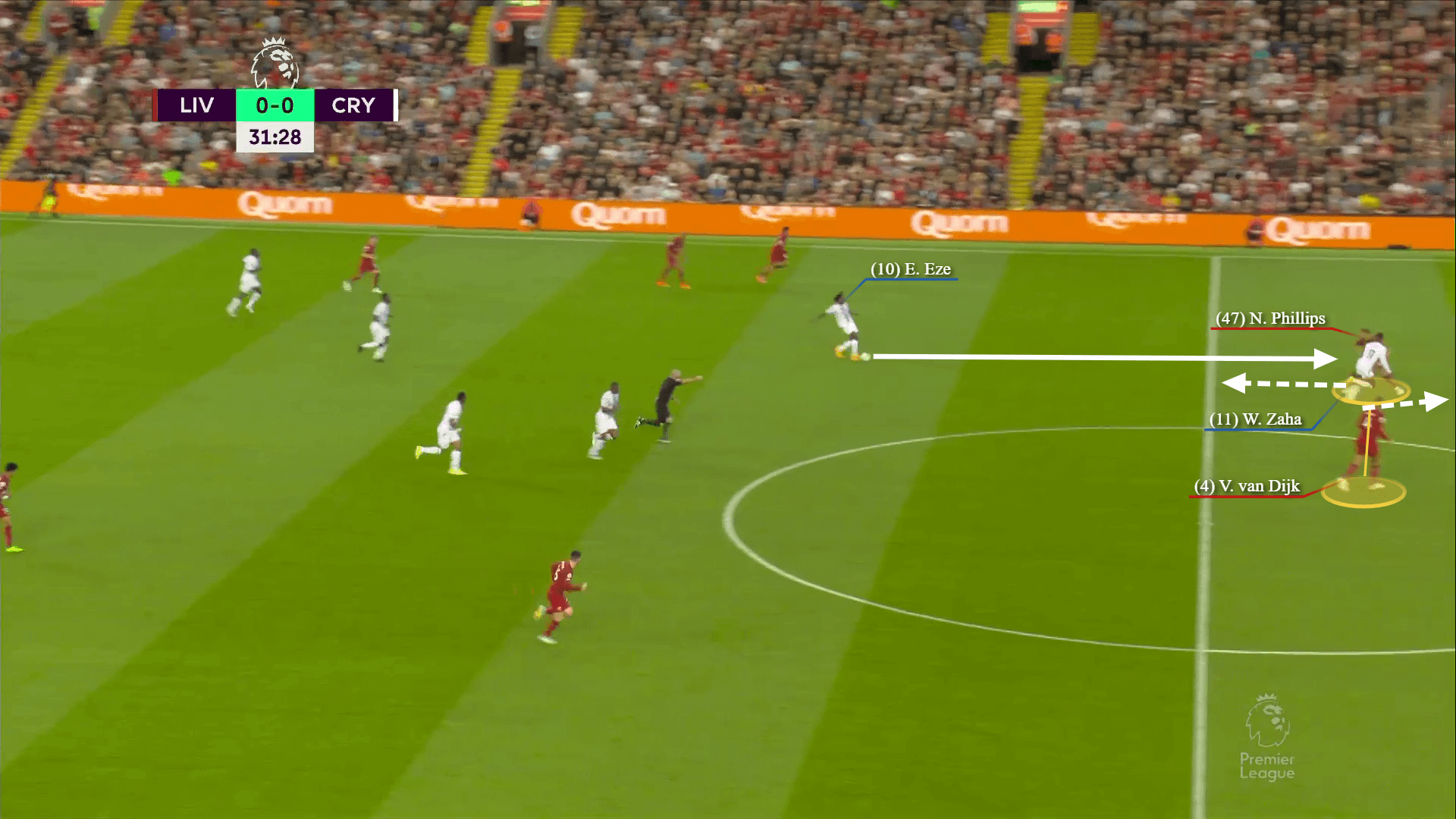 Similarly against Manchester United, after Anthony Martial wins possession from Henderson’s loose touch and skips away from Van Dijk’s challenge, he has time and space to pick his pass.

Instead of dropping with Marcus Rashford, Gomez holds his line, trying to play offside. It is a tight call but Rashford stays onside and finishes one-on-one against Alisson. 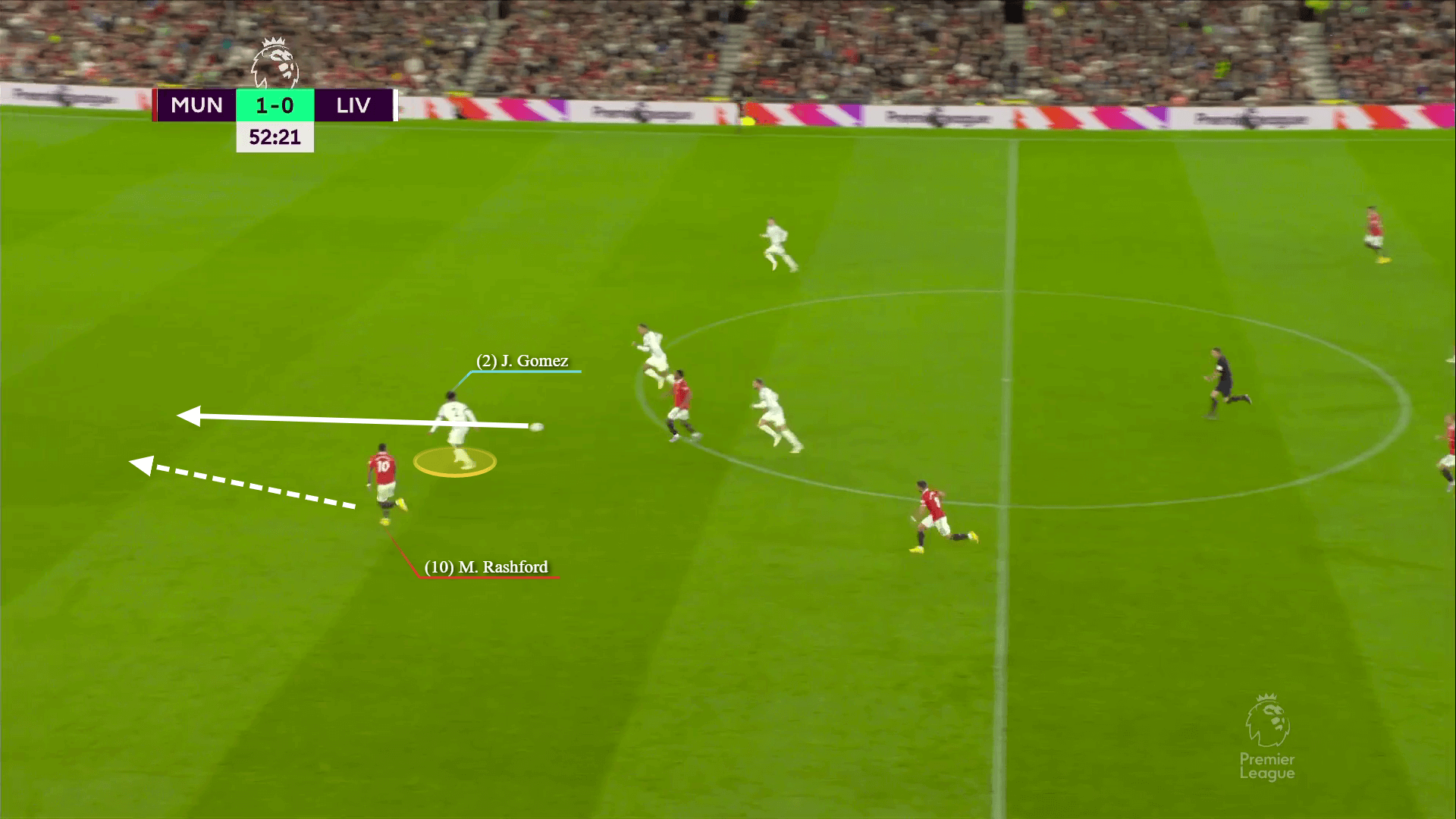 Against Napoli, Liverpool did show signs of dropping with the attacker, as highlighted by Van Dijk’s penalty concession, but then let themselves down with individual errors.

For the chance Van Dijk had to clear off the line in the first half, Matteo Politano was allowed bundles of time to pick his pass in behind for Osimhen.

Gomez is alert, though, and has already dropped. 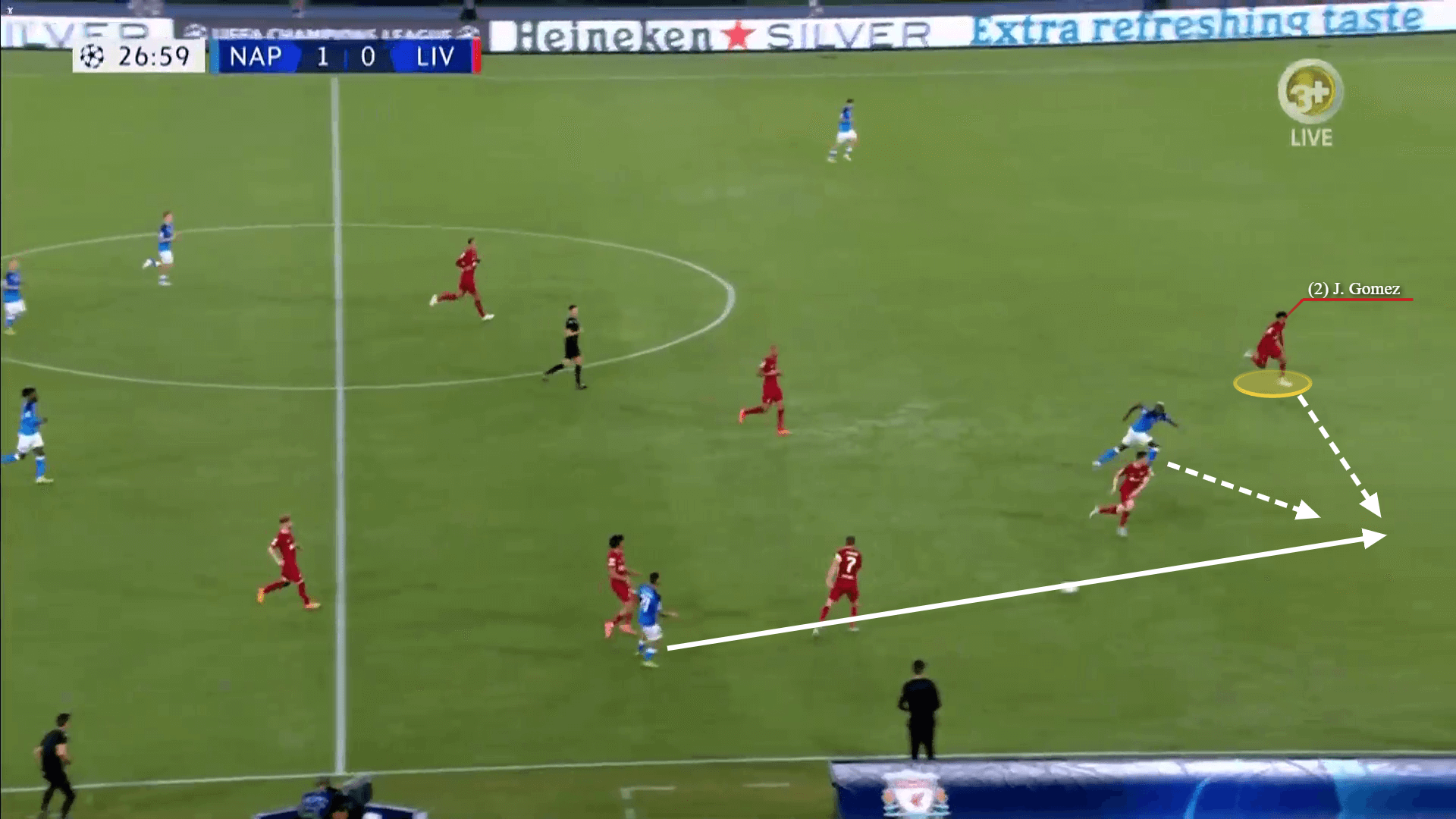 He gets to the ball first but fails to deal with it and is tackled by Osimhen, who sets up Khvicha Kvaratskhelia. 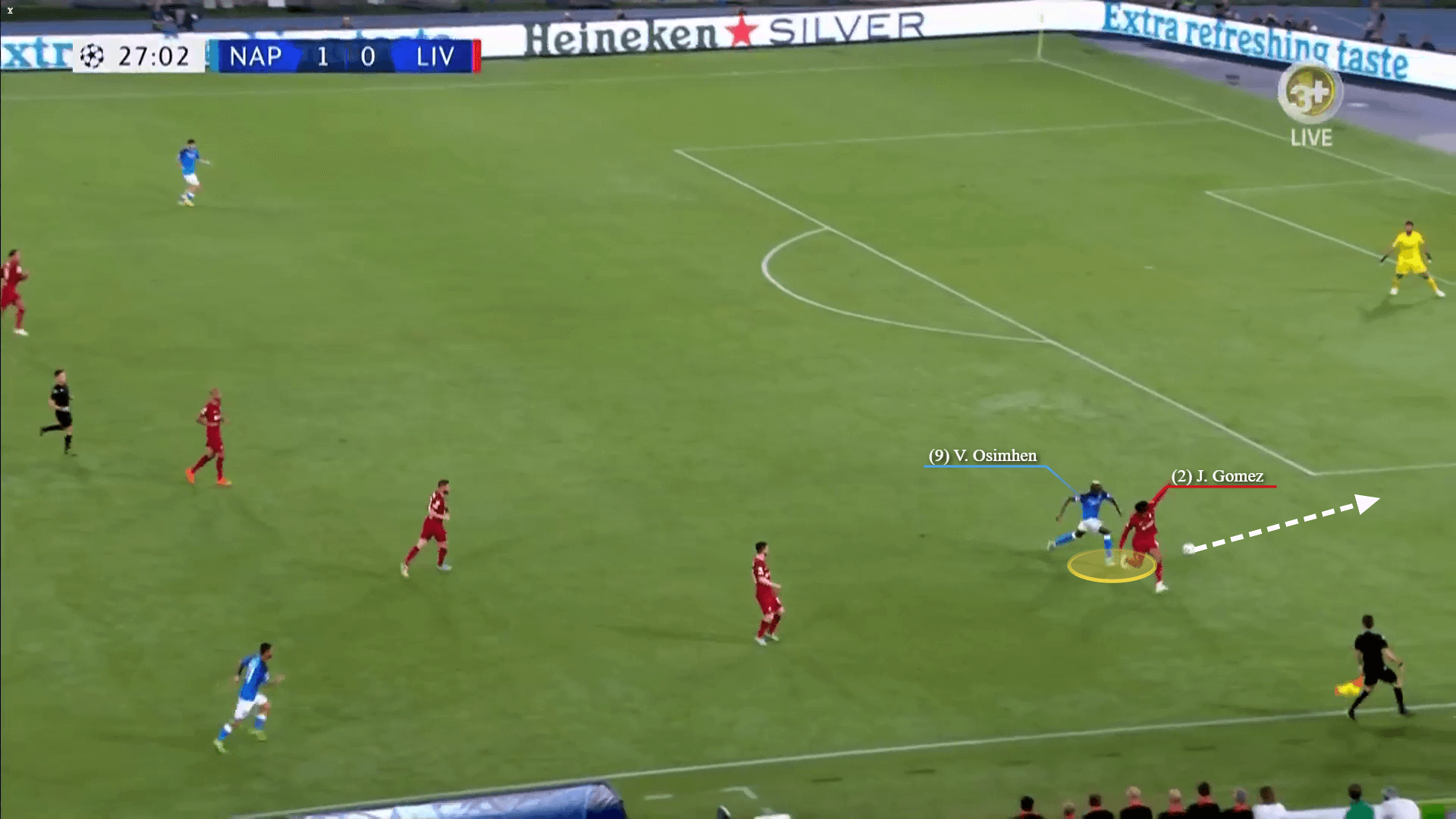 It is too harsh to put this solely down to Klopp’s midfield and forwards being unable to press — defensively there have been avoidable errors that have led to goals being conceded, with Gomez the main culprit against Napoli.

Klopp spoke about the need to reinvent his side following the defeat in Naples. But don’t expect him to ditch the high line any time soon. For Klopp, when it works well the benefits are clear.

However, when the protection is non-existent and defenders are making the most basic of errors, it makes Liverpool incredibly vulnerable.