Is Napoli’s victory over Liverpool the start of something special?
admin
September 9, 2022
5:40 am

Luciano Spalletti had his arm in a sling and needed a crutch. He’d broken his collar bone in an accident on his way to the training ground on Sunday morning and required an operation in Milan. “It was a seven-hour journey. I got to the hospital at four. They ran more checks. The surgeon was free at 11. I came out of the operating theatre at three and they discharged me at seven. I got back to work this evening. But it’s OK. I only missed one training session.”

Wearing a Napoli cap to cover up the cuts and bruises on his bald head, the banged up Spalletti seemed the personification of what opponents used to feel after playing Liverpool. Instead, last year’s runners’ up in the Champions League were the ones who left Naples’ Capodichino airport in the most pain, emergency surgery needed. They were outplayed at the Stadio Diego Armando Maradona and it’s hard to recall a better European night in the Bay Area.

Napoli have never had much luck in this competition. Real Madrid beat them in the preliminary round in 1987 back when there were no group stages. The second round was as far as even Diego Maradona could take the team. Spartak Moscow surprisingly knocked Napoli out on penalties in 1990. The Champions League wasn’t around then, it was still the old European Cup, and fans in Fuorigrotta had to wait until 2011 for Napoli to qualify for it. 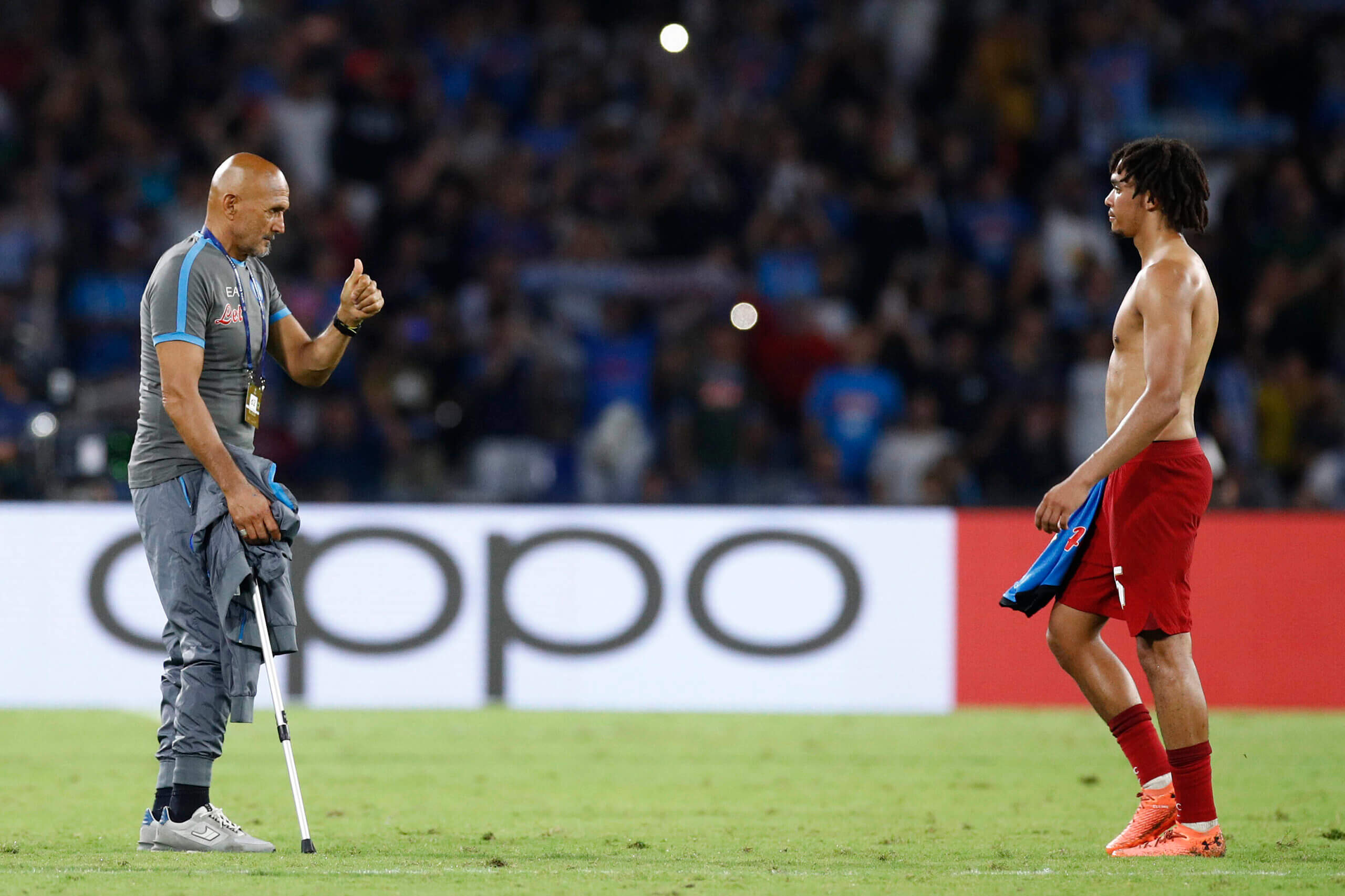 Spalletti, with his crutch, consoles Alexander-Arnold after the game (Photo: Matteo Ciambelli/DeFodi Images via Getty Images)

There has been plenty for the club’s legendary announcer Decibel Bellini to shout about in the meantime. Wednesday wasn’t the first time Napoli have defeated Liverpool here but the manner of it will live long in the memory.

“A night I will always remember,” owner Aurelio De Laurentiis tweeted. “So proud to be president of this team, masterfully led by Spalletti and his staff. Well done everyone. Thank you, thank you, thank you to the crowd at the Maradona.”

Napoli were everything Liverpool weren’t. The freshness and flamboyance of their performance contrasted with the stale, indifference of the visitors.

In the stands with his wife Kat, Napoli’s all-time top scorer Dries Mertens celebrated in a classic Maradona jersey from the 1980s. The Belgian was back at the ground for the first time since Napoli decided against extending his contract in the summer.

Rather than renew him and captain Lorenzo Insigne, the club renewed the team instead. Napoli got younger and feel at the beginning of something. Liverpool on the other hand are another year older and need to demonstrate this isn’t the end.

“This Liverpool side doesn’t play with the same intensity as they did in the years when they were winning everything,” Fabio Capello said on Sky Italia. “Napoli played a wonderful game. 4-1 wasn’t the right result. It should have been 7-2.” An exaggeration, perhaps, but by how much?

Alisson saved a penalty from Victor Osimhen who had already struck the outside of the post. ‘Kvaradona’ hit Virgil van Dijk rather than an otherwise open goal. The pair of them tied Liverpool in knots. It felt merciful when Osimhen came off as a precaution before half-time. And yet his replacement Giovanni Simeone scored with his first touch on his Champions League debut, kissing the Champions League logo he had tattooed on his wrist as a sign of his ambition to one day play in the competition.

An hour had not passed when Spalletti replaced Khvicha Kvaratskhelia with Alessio Zerbin, a 23-year-old who spent last season on loan with second division Frosinone. It was an indicator of Napoli’s dominance and comfort. Spalletti claimed to be unsurprised by the heights of his team’s high performance.

“I enjoyed it because we were able to be ourselves against a team as good as Liverpool,” he said. “But we need to be clear-headed. It’s the kind of performance we’re capable of if we have the right attitude. If this is Napoli then we need to be this Napoli each and every day. If this is our level then we have to show it all the time.”

Consistency is key. “We’ve put in a number of great displays over the last year,” Spalletti continued. The 4-0 against Lazio last November springs to mind. “The difference is tonight everyone was watching. There’s going to be more of a fuss about it. Now I want to see what we do on Saturday. We weren’t ourselves against Lecce (a 1-1 draw last week). Let’s not get cocky after one game.”

Normalising the extraordinary is now the challenge for this team and it won’t be easy. Managing expectations won’t be, either. If Spalletti walks through the Spanish quarter this morning, the locals will pick him up on their shoulders and chant his name. But it isn’t long ago that the ultras left a banner outside the San Paolo offering him a deal; they would find and return his beloved stolen FIAT Panda on the condition he left the club in the summer.

More mood swings will no doubt follow and it remains to be seen if Napoli can be the Napoli we saw last night for the rest of the group stage and the rest of the season. Osimhen’s performance felt like a microcosm of his time in Italy as he no sooner looked unplayable than he fluffed a penalty and sustained an injury. The club’s record €70million (£60.8m, $69.7m) signing has missed too many games over the last two years and was matched or out-scored by peers at Bologna, Sassuolo and Verona last season. But as with Kvaratskhelia, the maturing Piotr Zielinski, Andre-Frank Anguissa and Stanislav Lobotka, the sky is the limit.

Spalletti doesn’t want the focus to fall too much on either and rightly shifted talk to the defence, which was the best in Italy last season along with champions AC Milan and remains a tight unit despite the departures of David Ospina and Kalidou Koulibaly. “For me (Amir) Rrahmani played a great game. He gave nothing away,” Spalletti said. “Playing man to man and stepping out of defence to out-number your opponents is really hard so both him and Kim (Min-jae) were monsters tonight. The midfield covered a lot of ground and played with quality too. To beat Liverpool you have to play as a team.”

To win titles, you have to play like that every week. Better Napoli teams have fallen short. Notably the Maurizio Sarri vintage. But the league is more open than it was in those days with three different winners in three seasons. Time will tell if this is Napoli’s year.

Source link
Category : Uncategorized
PreviousTropical Storm Kay could bring a year’s worth of rain in drought-stricken southern California
NextRams vs. Bills score: Josh Allen throws for three TDs, runs for one as Buffalo dominates second half