Ten Hag made five changes to the team that beat Arsenal, moving to a 4-3-3 shape from the 4-2-3-1 and 4-4-2 that were employed last weekend, most notably restoring Cristiano Ronaldo to the starting line-up flanked by Antony and Anthony Elanga.

The veteran forward had a difficult night, attempting to lead an attack that tried to surround him with the sort of energy and running he used to be able to provide himself.

Ten Hag retooled his midfield from Sunday’s victory over Arsenal, giving Casemiro his full debut, anchoring a trio including Christian Eriksen and Fred. To the surprise of many in attendance at Old Trafford, it was Fred rather than Eriksen who operated as the most advanced midfielder.

It appeared Ten Hag wished to make use of the Brazil midfielder’s energy levels and ball-winning ability so he might do Ronaldo’s defensive work for him.

When United were out of possession, they changed shape into a compact 4-2-3-1 where Fred was tasked with dealing with Martin Zubimendi — the deepest midfielder in Real Sociedad’s midfield diamond.  It was an ambitious plan.

While Fred’s stamina levels allowed him to often pressure Zubimendi, his frequent mistimed tackling meant he could be bypassed by a clever attacker. If Fred did win the ball, his erratic passing made him ill-equipped to distribute the ball into the attacking third.

Wingers Antony and Elanga rarely got on the ball in areas to trouble the Spanish side and Eriksen had a subdued first half before being substituted.

United’s centre-backs — featuring Harry Maguire to the right of Victor Lindelof — were slow to progress the ball forwards. A second-half change, bringing Lisandro Martinez on for Diogo Dalot while Lindelof moved to right-back, brought improvement in central areas but weaknesses out wide.

Jadon Sancho again struggled to create when playing ahead of a full-back who could not provide overlapping runs. As it stands, a rotated United side does not know how to do the proper attacking rotations necessary to make Ten Hag’s plan work.

Casemiro’s performance will not see him trouble Scott McTominay for a starting position in the Premier League. Ten Hag will need the 30-year-old, who arrived for £70million ($81.3m) from Real Madrid in the transfer window, to provide intensity when breaking up the play rather than simply peppering the opposition’s goal with long-range efforts.

Playing ahead of an out-of-sync central midfield and inside two quiet wingers made life difficult for Ronaldo, but fans will be concerned at the lack of speed he is attacking the goal with. 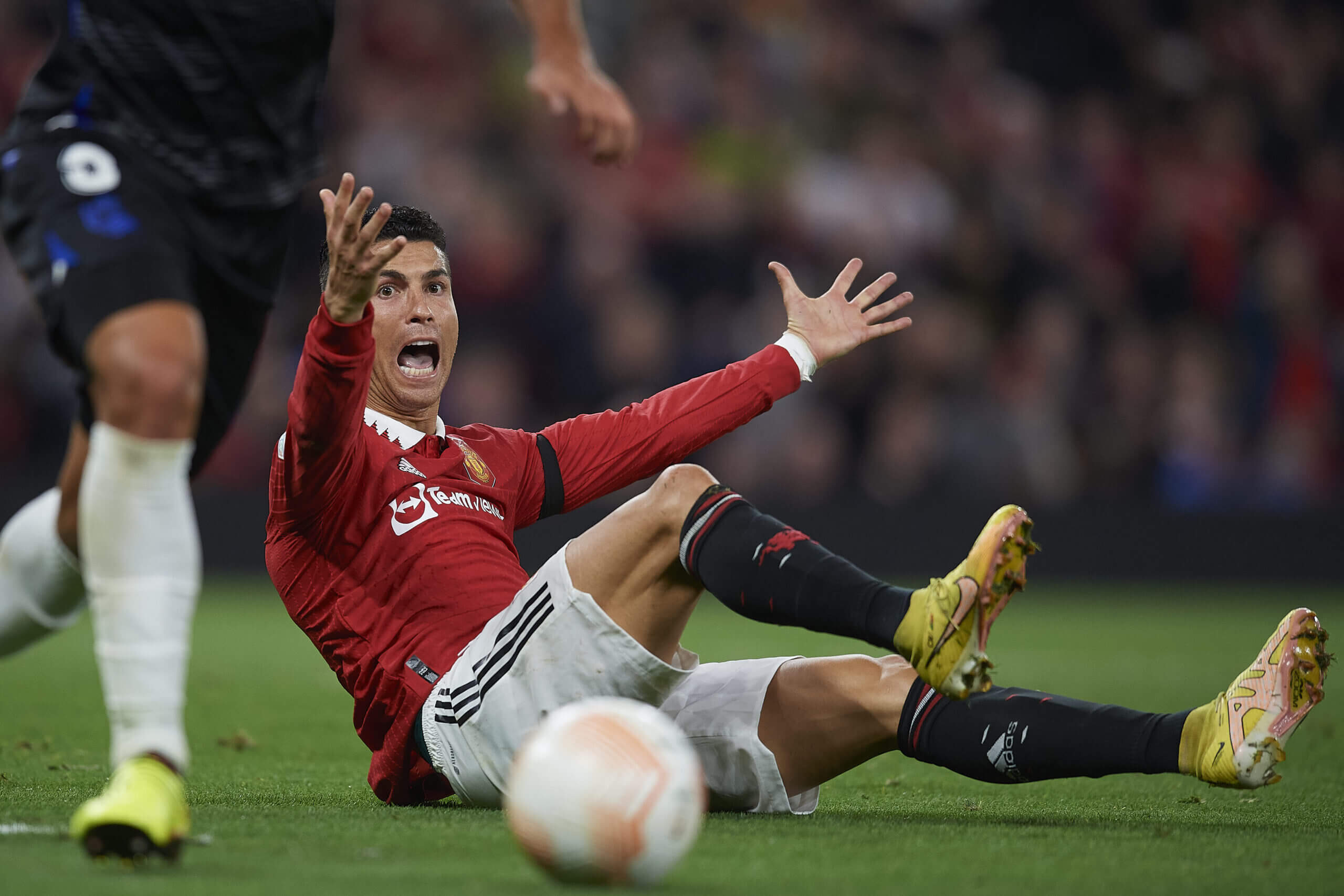 Ronaldo could not hide his frustrations on a difficult night (Photo: Jose Hernandez/Anadolu Agency via Getty Images)

A promising breakaway in the 10th minute saw Ronaldo barely break out of second gear when chasing a ball over the top, instead leaving Elanga to give chase.

Three minutes later, Ronaldo — from an offside position — found himself leading a promising counter-attack, only to be caught by two opposition defenders. Last month saw Mohammed Salisu and Armel Bella-Kotchap retreat the better part of 20 yards to dispossess the 37-year-old.

The visiting Real Sociedad fans taunted the forward at full-time, chanting “Where is CR7?” in Spanish.

Defeat to La Real leaves United in a difficult place for the rest of the Europa League campaign. Up to this point, Ten Hag had been coy about his ambitions for Europe’s secondary competition, preferring to talk about the desire to “win every game”.

Sheriff Tiraspol’s 3-0 victory over Omonia Nicosia means the United manager will have to field stronger-than-expected XIs if his side are to top Group E and avoid a round-of-32 tie.

It took a heavily disputed penalty for La Real to score on Thursday, but Ten Hag is likely to be more concerned by Ronaldo.

It is not simply how and when the forward presses the opposition team when defending, he no longer appears to have the burst of acceleration he used to get past defenders when attacking, while his rudimentary passing game means his attempts to drop deep and help in build-up play often go awry.

A headed “goal” in the 34th minute was a reminder of his goalscoring potential, but it was chalked off for offside.

With Anthony Martial injured, it leaves Ten Hag with few alternatives, but Ronaldo needs more help than ever to be a viable leading striker. It is not enough to play an energetic runner in the No 10 role to cover his defensive weaknesses. There must now be a greater effort to surround him with playmakers to maximise his strengths.