Judging by the bookmakers’ odds, there are eight sides who stand a decent chance of winning this season’s European Cup.

Broadly speaking, they look familiar from last season — few clubs have undergone a dramatic overhaul in terms of their starting XI and only one of these eight clubs appointed a new manager in the summer.

If you haven’t watched any of the favourites since last season, here’s the lowdown on their approaches for 2022-23.

After winning two European Cups in his first three seasons, Pep Guardiola has now coached clubs in 10 Champions League campaigns without winning a third — one with Barcelona, three with Bayern and six with Manchester City.

There remains a criticism that Guardiola “overthinks things” in the latter stages, although this season he’s probably got a squad less suited to meddling. He’s let go of Gabriel Jesus and Raheem Sterling, two versatile and tactically disciplined wide options, and signed Erling Haaland and Julian Alvarez, two centre-forwards.

Haaland, clearly, has already completely transformed City’s approach and is probably the purest No 9 Guardiola has ever had. He’s so far proved excellent at thumping goals past weaker Premier League sides and while there’s little doubt he’ll thrive in the Champions League group stage — 23 goals in 19 Champions League games tells the story — the real test will come in the knockout phase.

After all, it’s in those games against elite opponents where Guardiola tends to be more radical, often playing without a conventional striker. Is Haaland too powerful to leave out? Can he offer other things playing from the wing or dropping deep? It remains to be seen.

For now, Guardiola has started the season particularly keen on using half-backs — full-backs tucking inside to play as narrow midfielders. 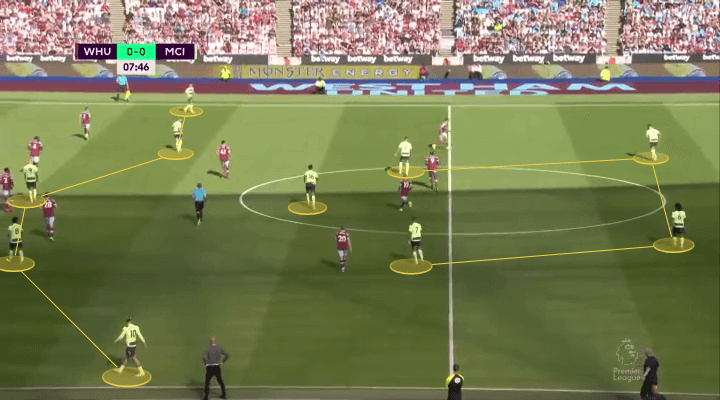 It’s an approach he’s used semi-regularly throughout the past decade, but Kyle Walker has been noticeably narrow with his positioning so far, perhaps because now that City have a conventional No 9 they need another body in the centre of the pitch.

Liverpool’s major change from last season isn’t entirely different to Manchester City’s — a proper No 9 has replaced a versatile wide player. Darwin Nunez is less of a surefire success than Haaland, and being sent off on his full Premier League debut didn’t help his chances of becoming an undroppable first-teamer, especially as Roberto Firmino performed well in his absence.

And, in a sense, Mane’s replacement was really Luis Diaz, who had already arrived in January and adjusted to the Premier League with remarkable ease. Nunez could be considered something of a bonus, an alternative option up front. But it remains to be seen how Mohamed Salah plays in a side boasting a proper No 9 rather than a link player to help feed him. Thus far, his best contributions have come when Liverpool have used Harvey Elliott in a right-sided midfield role, dragging the opposition left-back forward and creating space for him. 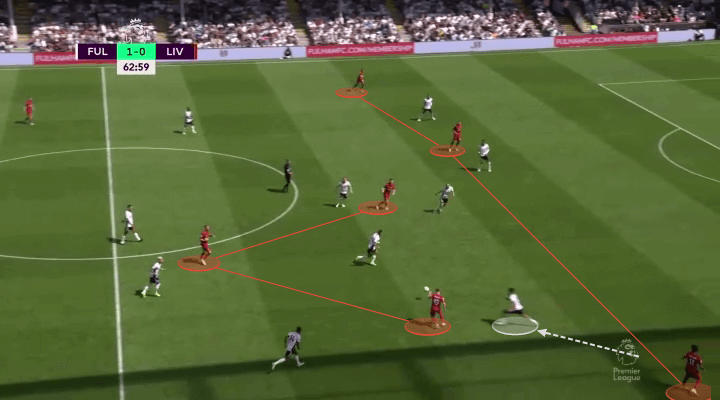 Otherwise, this is largely the same Liverpool side who reached the final last year, albeit with more question marks about whether the midfield can continue to depend on the likes of James Milner and Jordan Henderson. With Fabinho, Thiago Alcantara, Naby Keita, Alex Oxlade-Chamberlain, Elliott, Fabio Carvalho and loanee Arthur Melo all options, it’s not like Liverpool are particularly understaffed in midfield, although there are more questions about whether Klopp knows the right combination to provide the right balance.

On one hand, by the standards of PSG it was a relatively uneventful transfer window, with no obvious “galacticos” arriving.

Oh, and they also appointed a new manager, with Christophe Galtier replacing Mauricio Pochettino. The same question remains, though — how do you play Lionel Messi, Neymar and Kylian Mbappe in the same team but still offer any kind of defensive balance?

Galtier is going about things in a different manner to Pochettino and concentrating on using a three-man defence of Sergio Ramos, Marquinhos and Presnel Kimpembe. Vitinha provides the physical qualities in central midfield alongside Marco Verratti, allowing Achraf Hakimi and Nuno Mendes to provide the width.

All that means that Messi, Neymar and Mbappe feel like they’re together in central positions more than previously. Neymar has been the star thus far, with seven goals and six assists from his first five matches, but the three have combined well overall. PSG have twice scored lovely team moves featuring Verratti playing a forward pass, then one of Neymar and Mbappe knocking the ball back to Messi, with the other sprinting in behind onto his through ball. 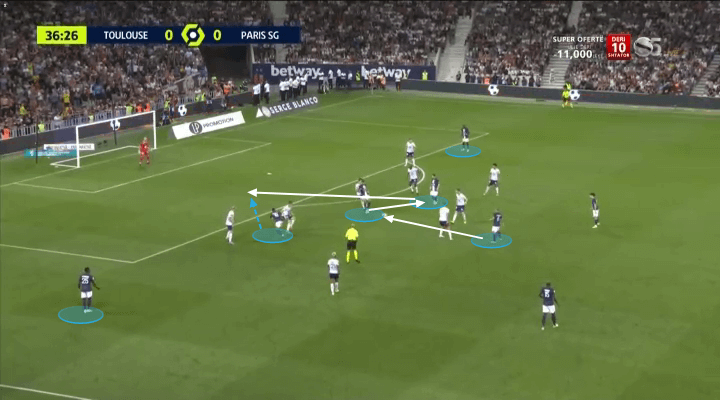 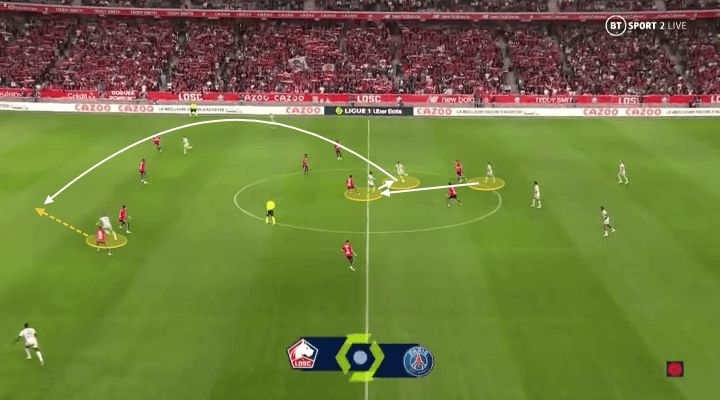 All three presumably consider the first half of their club campaign as something of a warm-up for the World Cup. PSG’s owners have reason to be happy enough for three superstars to make sure they’re perfectly conditioned to shine in Qatar. We’ll have to wait until the knockout stage in the new year, however, to see whether Galtier’s tactics will work in the type of games where PSG have often fallen apart.

Robert Lewandowski helped make Bayern Munich extremely consistent, but he also made them — tactically — a little dull. Lewandowski was so dominant that everything was based around him, regardless of the quality of Bayern’s other attacking options.

Without Lewandowski, Julian Nagelsmann has the opportunity to be more experimental. Thus far, he’s consistently used a back four — which seems to shift into a back three less often than last season — and consistently used Joshua Kimmich and Marcel Sabitzer together in the centre of midfield. 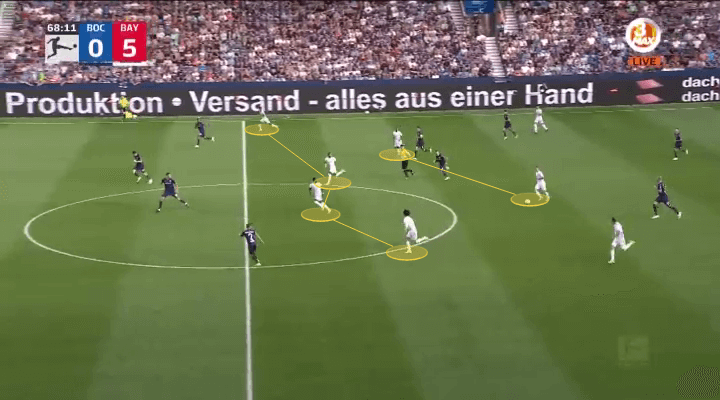 But a common feature of Bayern’s play has been the rotation of the player dropping into a position between the lines to complete the midfield triangle, which has allowed them to play through the lines smoothly, playing quick and purposeful passing moves. Attacks down the flanks have regularly culminated in cut-backs to the edge of the box rather than crosses.

Nagelsmann, as ever, will change formation regularly — between matches and within matches. Tactically, his goal is to ensure we aren’t constantly saying Bayern lack a Lewandowski figure up front.

The side who do have a Lewandowski figure up front, of course, is Barcelona. Perhaps they felt an unlikely destination for the modern game’s most consistent No 9, but then Lewandowski is more than simply a goalscorer, and a look at Barcelona’s scoring charts last season shows they needed a proper striker — Memphis Depay was their top league goalscorer with 12.

The side can basically be separated into three parts. The attack feels entirely new, with Lewandowski up front and Raphinha cutting inside from the right. Ousmane Dembele (who many suspected would leave in the summer) and Ferran Torres (who only joined in January) have competed to start on the left.

The midfield is pure Barca; Sergio Busquets in the holding role with Pedri and Gavi either side is precisely what you expect from a Xavi Hernandez side, with Frenkie de Jong offering another option.

The interesting thing has been the defence, which, on paper, is a solid back four — meaning Barca play in a 4-3-3 and look like most Barcelona sides over the past couple of decades. 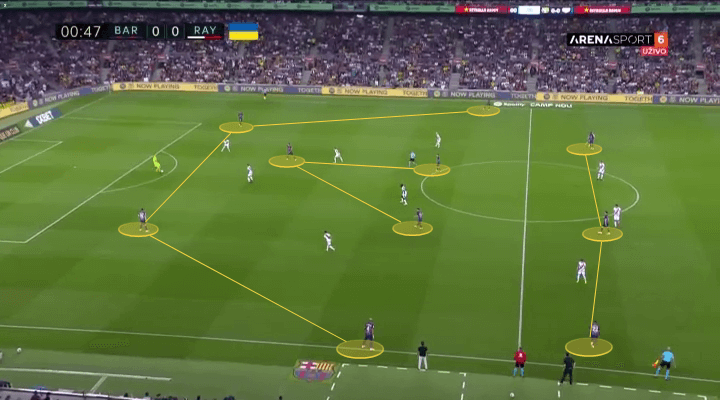 But Xavi likes his side to shift into more of a 3-2-4-1 or 3-2-2-3 formation, which is generally achieved with the left-back — Jordi Alba or youth product Alex Balde — pushing forward aggressively on the overlap, with the left-winger tucking inside, perhaps comparable to what Andres Iniesta often did under Pep Guardiola in big games, providing a fourth midfielder. 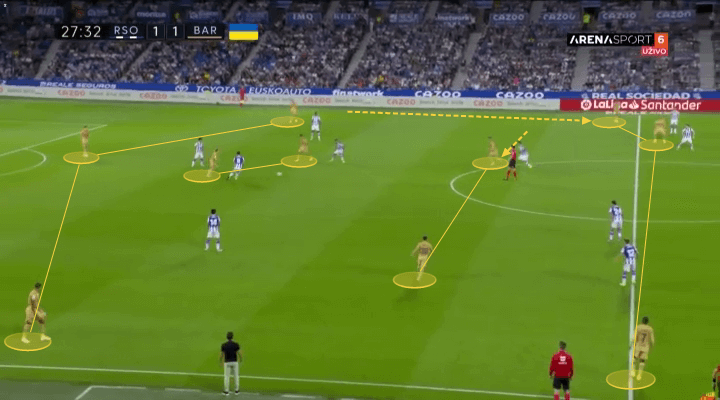 This particularly happens when Barcelona are pressed with a front two, as Xavi likes them to play out with a back three. The build-up play looks encouraging, but it remains to be seen if the attackers click. That said, with the quality of Lewandowski, Barcelona will sometimes be bailed out by an elite No 9 — which certainly wasn’t true last season.

“If it ain’t broken, don’t fix it” isn’t necessarily an argument many top-level football managers would sympathise with. Pep Guardiola, for example, is noticeably keen to evolve his side before things become stale.

But Carlo Ancelotti isn’t such a tactical obsessive and after guiding Real Madrid to the European Cup last season with a fairly simple 4-3-3 system — more or less what Real have used over the last decade — hasn’t seen fit to make sweeping changes here. The major summer acquisition was Aurelien Tchouameni, effectively a replacement for Casemiro before the Brazilian even left for Manchester United. He’s slotted straight into the holding role in Ancelotti’s 4-3-3. Antonio Rudiger joined on a free transfer from Chelsea, a second astute defensive addition for no transfer fee in as many summers after David Alaba last year.

But it’s still the same thing for Real. It’s still largely about Karim Benzema, whose freedom to drop deep and drift left is perhaps the key feature of Real’s 4-3-3. 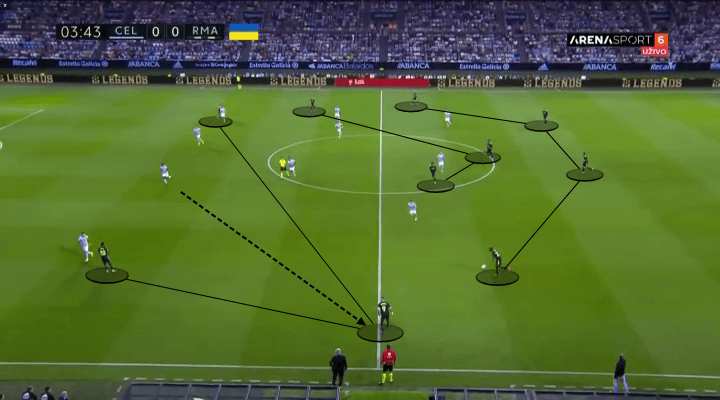 The matchwinner in last season’s final, Vinicius, remains the second-most dangerous attacker from the left. Luka Modric and Toni Kroos are still around dictating play from either side of a midfield three, although will probably be rotated more often this season, with Eduardo Camavinga coming in more. Federico Valverde is a slightly unusual right-winger and Lucas Vazquez a slightly unusual right-back, but it worked last season and might well work again.

Thomas Tuchel’s performance in his first half-season was unbelievably impressive, formatting Chelsea in a rough 3-4-3 that took them from a chaotic mess under Frank Lampard to deserved European Cup winners. The defensive base to the side was extremely solid, although Chelsea sometimes lacked attacking cohesion.

Last summer’s addition of Romelu Lukaku was supposed to transform Chelsea going forward, but the Belgian struggled desperately at times, criticising Tuchel’s tactical use of him. By the end of the season, it felt like Chelsea had gone backwards and several key attacking players under Tuchel — Lukaku, Timo Werner, Christian Pulisic and Hakim Ziyech — have struggled to find their best form.

The latest players tasked with playing the Tuchel way are Raheem Sterling and Pierre-Emerick Aubameyang, attackers largely based around the speed and the timing of their runs in behind. Mason Mount and Kai Havertz, two players skilled in finding space between the lines, are the other key attacking threats — Mount’s freedom in the 2-2 draw against Tottenham was remarkable. 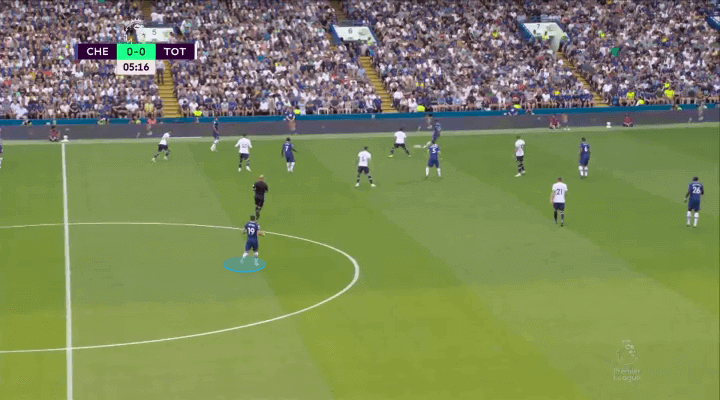 Tuchel’s system has often looked like a 3-4-3 without possession and more of a 4-2-2-2 in possession, with Ruben Loftus-Cheek sometimes used as a right-wing-back-cum-attacking-midfielder. There’s an argument that a more permanent back four would open up an extra attacking slot and make Chelsea more dangerous going forward, though the signings of Wesley Fofana and Kalidou Koulibaly and the continued excellence of Thiago Silva means a three-man backline suits the defence.

Marc Cucurella brings another tactical option down the left, but for all the upheaval in defence and attack, Chelsea still feel a familiar outfit from last year.

Tottenham, finalists in 2019, make their return to the Champions League after a couple of seasons playing in the Europa League and then Conference League. In Antonio Conte, they now boast a manager widely considered among the best in Europe, although his European record is somewhat underwhelming compared to his domestic record.

Conte quickly established his usual three-man defence at Spurs, the 3-4-3 of his Chelsea days rather than the 3-5-2 he favoured with Juventus, Italy and Inter. In the second half of last season, Tottenham were superb, still based around the excellent relationship between Son Heung-min and Harry Kane, but with Dejan Kulusevski arriving in January to play from the right, knitting things together and working in tight spaces. Spurs are most impressive when those three break forward at speed. 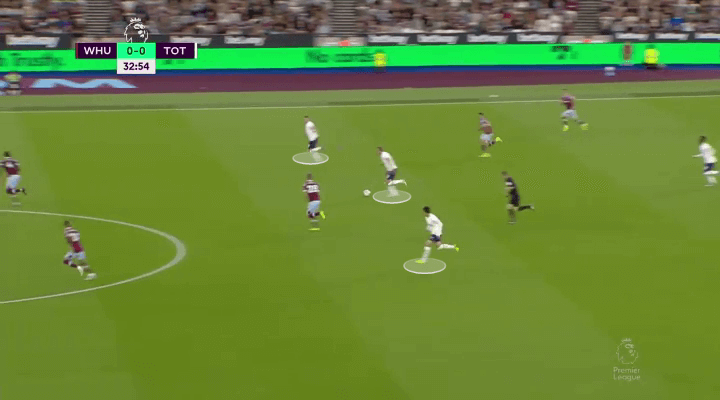 Spurs’ summer transfer business has been impressive but not immediately revolutionary in terms of their playing style. Richarlison is a versatile option up front and performed well in the weekend win over Fulham. Yves Bissouma is a fine all-round midfielder, while Ivan Perisic thrived at wing-back for Conte’s Inter side and Djed Spence is a promising option down the right. In terms of shape, though, it’s essentially the Tottenham side we saw in the second half of last season.

7 Awesome Google Drive Features You May Not Know About

Is the worst over for bitcoin and the rest of crypto?