Richarlison is Tottenham’s new force of nature who means Kane can actually get a rest
admin
September 5, 2022
12:00 pm

To get a sense of how well Richarlison played against Fulham on Saturday, Tottenham Hotspur head coach Antonio Conte felt emboldened to take Harry Kane off with 12 minutes remaining.

That may not seem like a huge call given Spurs were 2-0 up at the time, but it is extremely rare that Conte does this. He’s only done it once before in fact — on Boxing Day against Crystal Palace, when Spurs were in the middle of a COVID-19 crisis, battling a very busy festive schedule, and 2-0 up against an opponent down to 10 men with their best player sent off. Other than that Kane has started 42 of Conte’s 43 matches in all competitions, finishing 41 of them. In short, Kane being substituted pretty much never happens.

But for the first time since Conte arrived (and you could argue since Kane’s first-team breakthrough almost a decade ago), Spurs have a reliable alternative forward they can turn to. Conte said after Tottenham’s 2-1 win that Richarlison “playing really well” means he’s “more relaxed, because when you play every three days sometimes you need to give a bit of rest”.

Richarlison’s start also meant a rest for Dejan Kulusevski ahead of Wednesday’s Champions League opener against Marseille, and this was a performance that showed why Spurs paid £50 million (with an extra £10 million for add-ons) for the Brazil international this summer.

He was very unfortunate not to score, hitting the post and having a goal disallowed for offside, but provided a constant threat, and a very different one to Kulusevski. Where Kulusevski makes Spurs tick with his close control and smart link-up play, Richarlison is more hustle and bustle — playing with less finesse but constantly making defenders’ lives difficult.

That’s not to say he doesn’t have technical quality — he has plenty — but there’s also a force-of-nature element to his game that makes him very watchable and very awkward to play against. It also helps to explain why Richarlison has become such an instant favourite with the Spurs fans, cheered loudly as he walked off after the final whistle and giving them a wave in return.

He’s already very popular in the Spurs dressing room too, as has been the case at all his previous clubs. Where he’s ferociously competitive on the pitch, often massively winding up opposition players (and pundits), off it he’s much more lighthearted, known for his kindness, liveliness and endearing goofiness. The Tottenham players have really taken to Richarlison, and their delight when they thought he had scored was partly a reflection to that.

But it’s performances that ultimately win over fans, and Richarlison has started very well in this regard. Saturday was his first start, but on his debut against Chelsea last month he changed the course of the game with a high-energy performance that unsettled Thiago Silva and his fellow defenders. Then came the entertaining cameo against Nottingham Forest when he set up Kane’s second with a gorgeous cross and produced a bit of showboating that seemed to trigger half the world’s English-speaking population.

Against Fulham, Richarlison registered another assist — a smart return pass to Pierre-Emile Hojbjerg for the Spurs’ opener — had three shots, and created four chances. He almost scored inside 10 minutes with a header that was deflected over, and on numerous occasions tracked back and hustled Fulham players into losing the ball. In total, Richarlison won four out of four tackles (making the second most of any player on the pitch), made two interceptions (also the second most) and recovered the ball seven times (second most of the outfield players). Those numbers reflect how hard he worked, and at one point he combined this defensive diligence with an attacking threat — nicking the ball off Kevin Mbabu and then firing in a cross that Eric Dier put over. 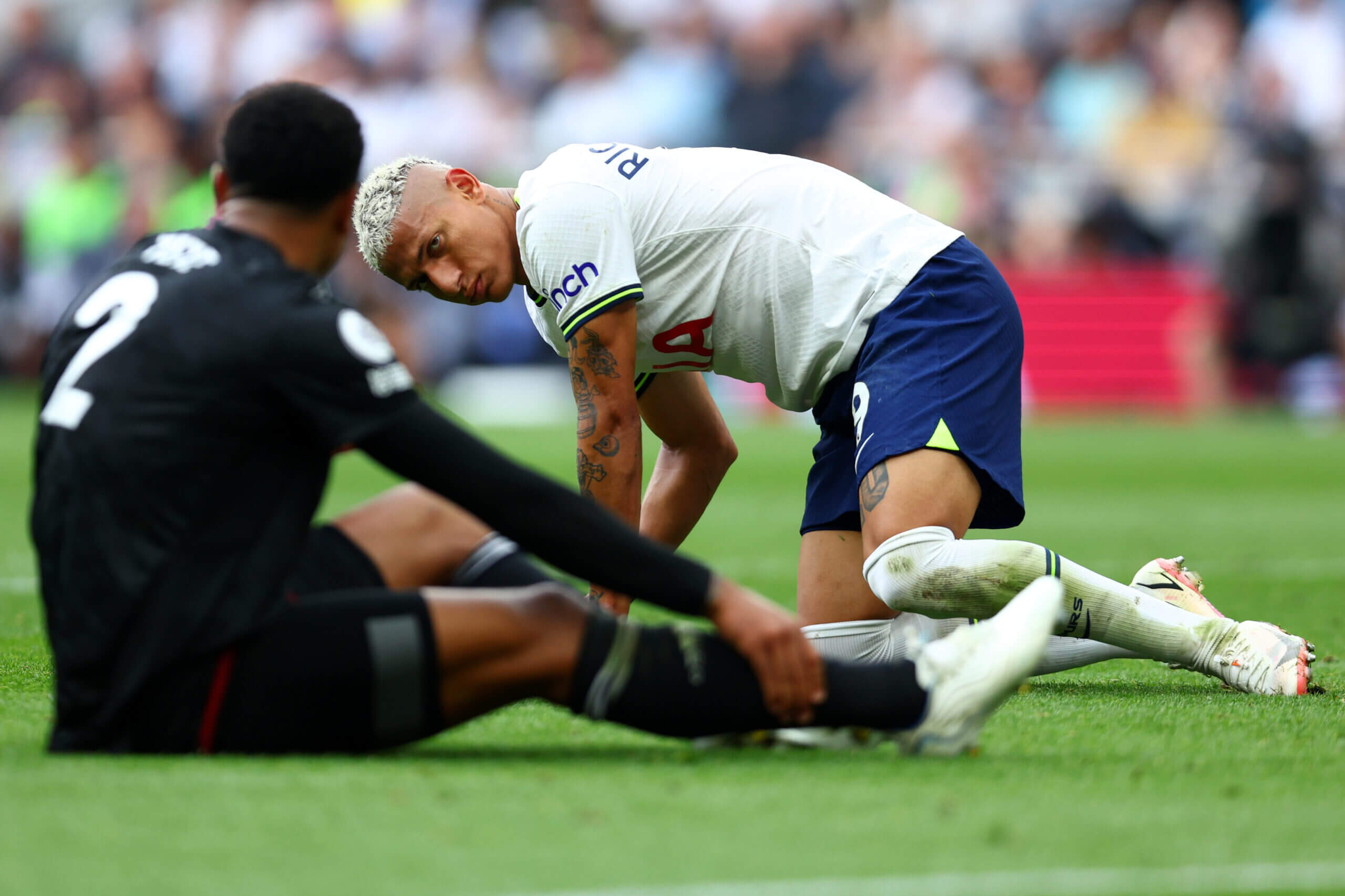 Richarlison’s “goal” that was disallowed showcased his link-up play, as he began the move by dropping deep from a throw-in and laying the ball off before haring into the centre-forward position that the substituted Kane had vacated (the celebration meanwhile showed how high Richarlison scores on the “just gets it” scale — displaying so much passion that he picked up a booking for taking his shirt off for a goal that didn’t even count).

Earlier in the second half, Richarlison played a smart flick round the corner to Son Heung-min in a move that ended with Kane having a shot blocked. In the first half he played a first-time backheeled pass to set Kane away. In amongst this, there were a couple of reminders that he can sometimes lack Kulusevski’s finesse as he overhit passes aimed for his fellow forwards in promising positions.

Positionally, Richarlison started the game nominally on the right, but he had the licence to move inside and take up central positions. It was from a more central position that he got in behind the Fulham defence shortly after half-time but couldn’t put his finish beyond Bernd Leno. In the first half, he had joy on both flanks, almost creating a goal for Son after drifting over to the left and gliding past Tosin Adarabioyo.

Richarlison’s ability to play in all three of the forward positions was part of the attraction to Spurs this summer, and it should mean that all three of Kane, Kulusevski and Son can get a rest in the hectic run Spurs are on of seven games in 21 days. Conte alluded to this versatility in a post-match press conference that saw him full of praise for Richarlison.

“He played in an amazing way,” the manager said. “And gives me the possibility to make rotation without a drop in quality.”

Richarlison was also signed partly because of his intensity and the fact he would give the team more of the streetwise edge they’ve often lacked. “You feel him when he’s on pitch and feel his personality on the pitch,” Conte said after the game. “He’s a warrior, a fighter and we need this type of player to improve this type of aspect.

“I enjoy the fact he worked a lot to understand our ideas quickly.”

Richarlison ended the match with that disallowed goal, and some really useful bits of hold-up play as Spurs withstood a late Fulham fightback. All this while Kane was able to put his feet up for once.

There has already been a clamour for Richarlison to start ahead of Son, who played well on Saturday without scoring. Whoever plays, what really matters is that Spurs finally have a genuine attacking alternative. It’s the sort of competition Conte has been craving since he took over.