Leicester City have completed the signing of defender Wout Faes from Reims for a fee of £15m.

Faes, who was named Reims' player of the season for 2021-22, will join Leicester as a replacement for Wesley Fofana, who moved to Chelsea this week.

The 24-year-old made his debut for Belgium in the Nations League in June this year.

Faes is Leicester's second summer signing after they signed Alex Smithies as a backup goalkeeper on a free transfer.

"This is the dream step in my career and I'm very happy to be here," said Faes, whose one senior Belgium cap came as a substitute in a Nations League win over Poland.

"I'm progressing year after year, and I hope to continue doing the same here. All the facilities and knowledge is here to help me to get even better. With Leicester closing in on a new summer signing, the Transfer Talk panel discuss what Wout Faes would bring to the side.

The Foxes are now thought to be turning their attention to recruiting a right winger, with former Chelsea trainee Jeremie Boga their primary target.

Negotiations with Atalanta are ongoing over a possible loan or substantive move.

Fofana moves to Chelsea in a deal worth £70m

Chelsea have completed the signing of centre-back Wesley Fofana from Leicester in a deal worth up to £75m. 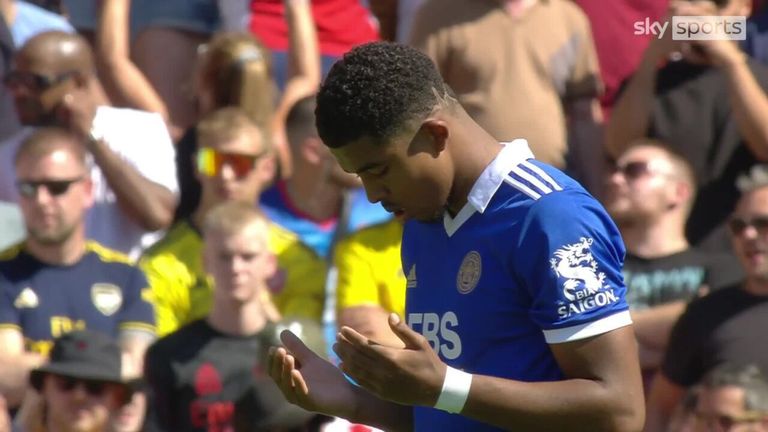 Kaveh Solhekol says Chelsea fans will be pleased with the signing of Wesley Fofana, but issues remain in the club's midfield and in attack.

Chelsea will pay an initial £70m, with a further £5m possible in add-ons, and Fofana has signed a seven-year contract with the club.

Leicester and Chelsea agreed a fee for Fofana on Saturday, with the defender flying to the USA on Monday for his medical.

"It's worked out quite well for Wout Faes. If you go back to the weekend, he thought he was going to Torino, but at the last minute, Torino decided to undercut Reims and decide they're not going to pay the £15m.

"Faes had his bags packed and was ready to come, so was really disappointed that the move to Torino didn't come through.

"But then this Leicester move falls into his lap. It's for more money and he gets to come to the Premier League.

"This is exactly the sort of market Leicester should be shopping in. Faes has been very consistent and I think he'll be really good for them."

Johnson on 'much improved' Faes

"Obviously there will be comparisons drawn between him and David Luiz because of his appearance but he is a player who has improved in France over the past couple of years.

"He was quite rough around the edges when he first signed for Reims. He's improved on his discipline in the last year or so and offers a bit of a goal threat going forward as well.

"Definitely a player to keep an eye on. Given their financial restraints, I think Leicester have done pretty well to get him at this late stage in the transfer window."

Our Deadline Day programming starts at 7am and continues throughout the day on Sky Sports News, where you will be able to hear from Paul Merson, Clinton Morrison, Shay Given, Wes Morgan, Paul Robinson, Lianne Sanderson, Nigel De Jong and many more.