So much for the UK’s cost-of-living crisis. In these final days of the summer transfer window, Premier League clubs continue to spend as if tomorrow may never come.

Already the numbers are unprecedented. In excess of £1.4billion ($1.65billion) has been spent by Premier League clubs on transfer fees over the past two months and more will come before next Thursday’s deadline.

And all the while the rest of Europe watches on.

Bayern Munich, Barcelona, Paris Saint-Germain and Juventus have spent amounts in keeping with their English counterparts this summer, but the Premier League’s financial strength has never been more apparent.

Eight of Europe’s 10 biggest-spending clubs this window have been English. Five of those are not in the Champions League this season: Nottingham Forest, Manchester United, West Ham United, Arsenal and Wolverhampton Wanderers each spent more than Real Madrid, who won the Champions League in May.

Middling English clubs are financial heavyweights with Premier League money on the hip. For example, Leeds United, who avoided relegation to the Championship on the final day of last season, have spent £89million so far this summer after selling some of the family silver. Or West Ham United, a club that has met countless setbacks in the current market, have still managed to spend £115million. 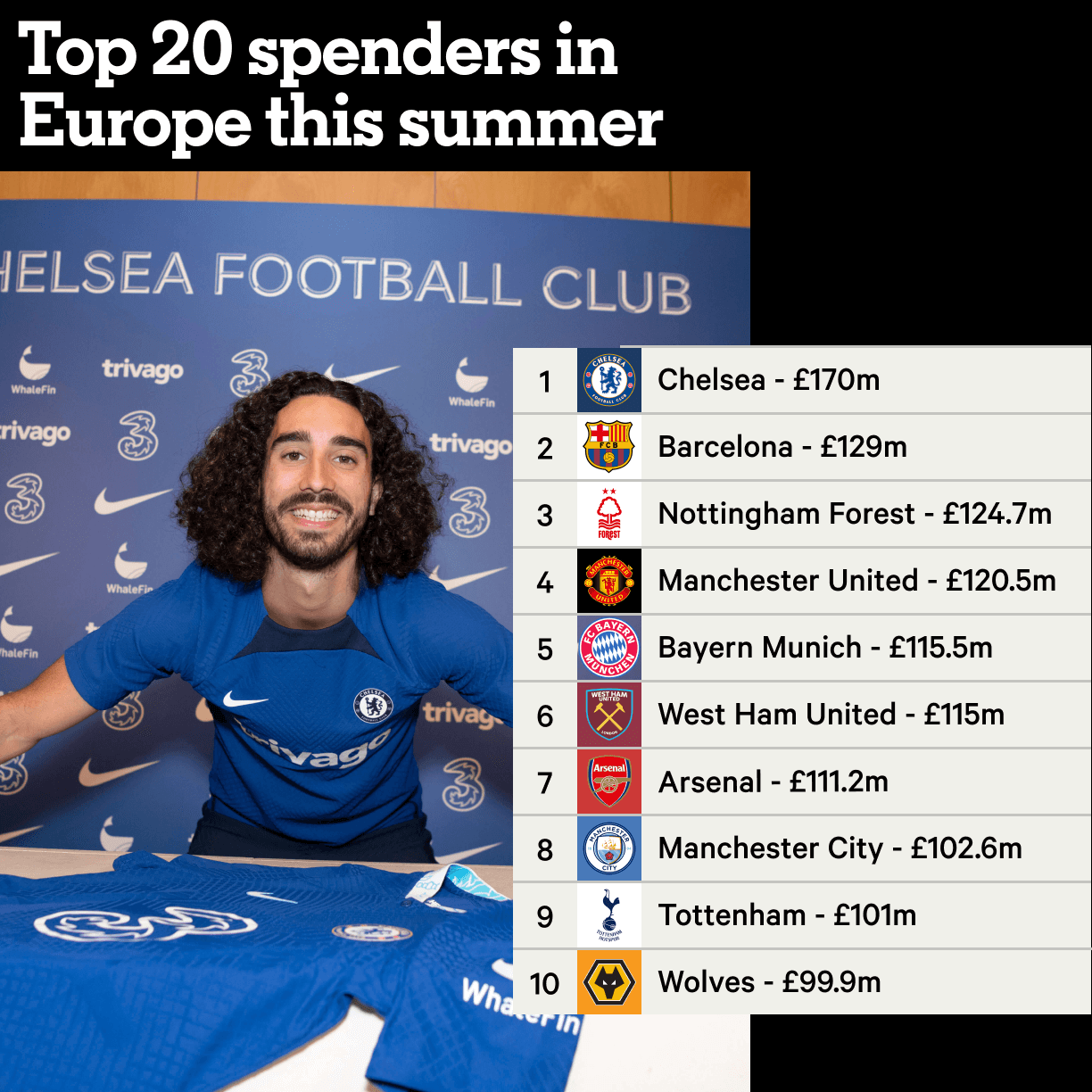 Not that the rest of Europe can’t write a big cheque. Real Madrid invested £67.5million to sign Aurelien Tchouameni from Monaco, while Bayern Munich found £57million to sign Matthijs de Ligt from Juventus. Barcelona, for all their financial troubles, stumped up £129million to sign Raphinha, Jules Kounde and Robert Lewandowski.

The bulk of the spending, though, now comes from Premier League clubs.

Nineteen Premier League clubs, overlooking a Leicester City side yet to spend, have completed a total of 57 transfers that are individually worth £10million or more. According to Transfermarkt, the website devoted to such matters, 53 of the biggest 100 transfer fees this summer have been paid by English clubs.

Indicative of the power shift are the nouveau riche. Nottingham Forest, a Championship club three months ago, have spent a once unimaginable nine-figure sum to overhaul their squad. Fulham narrowly miss out on being one of Europe’s 20 biggest spenders after an investment of about £47million.

The average spend across the Premier League this summer is in the region of £73million per club. That figure will almost certainly go north of £80million in the coming days, perhaps even kissing £90million by the end of the window if the big fish targeted, like Antony, Alexander Isak and Wesley Fofana, are hooked.

And the rest of Europe? Nowhere close.

The 28 non-English clubs through to the Champions League group stages have spent an average of £42.6million on new players this summer. That number is skewed by the relative minnows, like Maccabi Haifa, Viktoria Plzen, Dinamo Zagreb and Shakhtar Donetsk, but even accounting for just the 13 clubs from Spain, Germany and Italy, the average spend is still only £58million. 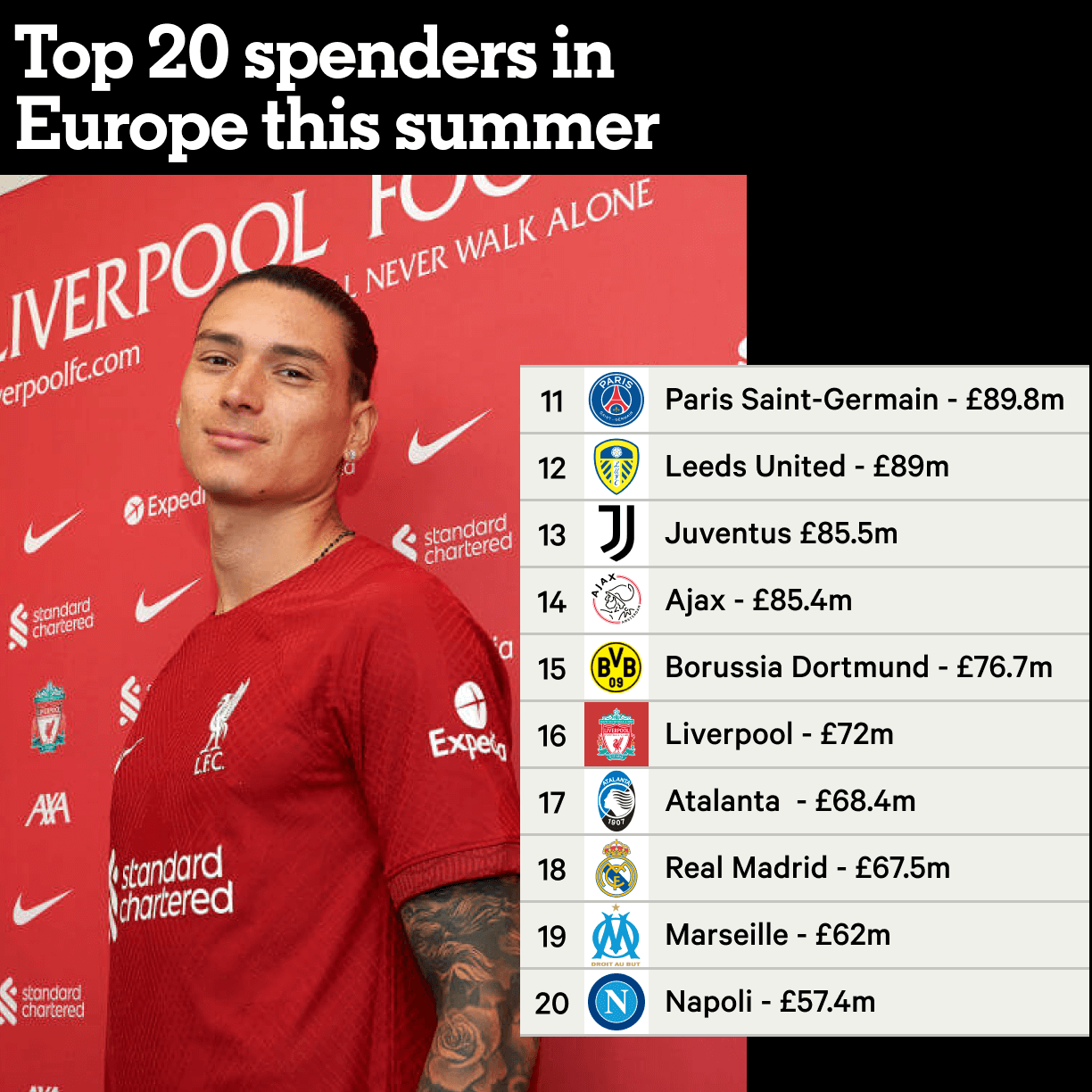 Analysts expect the gaps to only grow. Deloitte’s Annual Review of Football Finance 2022, published last week, outlined that the collective revenues of Premier League clubs in 2020-21 was back on an upward trajectory after COVID-19, at almost £4.58billion. Germany’s Bundesliga was next best at just over £2.53billion, with Spain at £2.49billion and Italy at £2.13billion.

The forecast figures for this season, however, help to explain the summer that is nearing its end.

Deloitte has projected that the collective revenues of Premier League clubs in 2022-23 could top £6billion thanks to new overseas broadcast deals. The Premier League’s share of the global media market for domestic football leagues is now said to be 44 per cent, up from 40 per cent.

The accountancy firm estimates Spain will be the next best in Europe with £3.7billion this season — just over half the turnover of the Premier League. If the forecasts come to pass, the Premier League’s annual revenue will comfortably eclipse the earnings of the Bundesliga and Serie A combined.

“The gap from the Premier League to the rest is so significant now,” Tim Bridge, lead partner in the Sports Business Group at Deloitte, tells The Athletic.

“Premier League clubs appear to have come through the COVID-19 pandemic in better financial health than a lot of clubs in Europe and further down the system in England. That gives them a competitive advantage across the board.

“We feel that we’re approaching a point where that disparity could be extended and never return. There is no doubt the rest of Europe finds that unsettling.”

If the Champions League offers prestige to the 32 clubs in the group stages next month, its riches cannot keep pace with the Premier League.

UEFA’s Financial Report for 2020-21 revealed that winners Chelsea earned €119million (just over £100million) when lifting the trophy in Porto, broadly the same as runners-up Manchester City. For comparison, Sheffield United received £97.5million for finishing bottom of the Premier League in 2020-21.

Aside from Manchester City and Chelsea, no other club earned that much from the Champions League. Paris Saint-Germain were the next highest earners on about £95million. 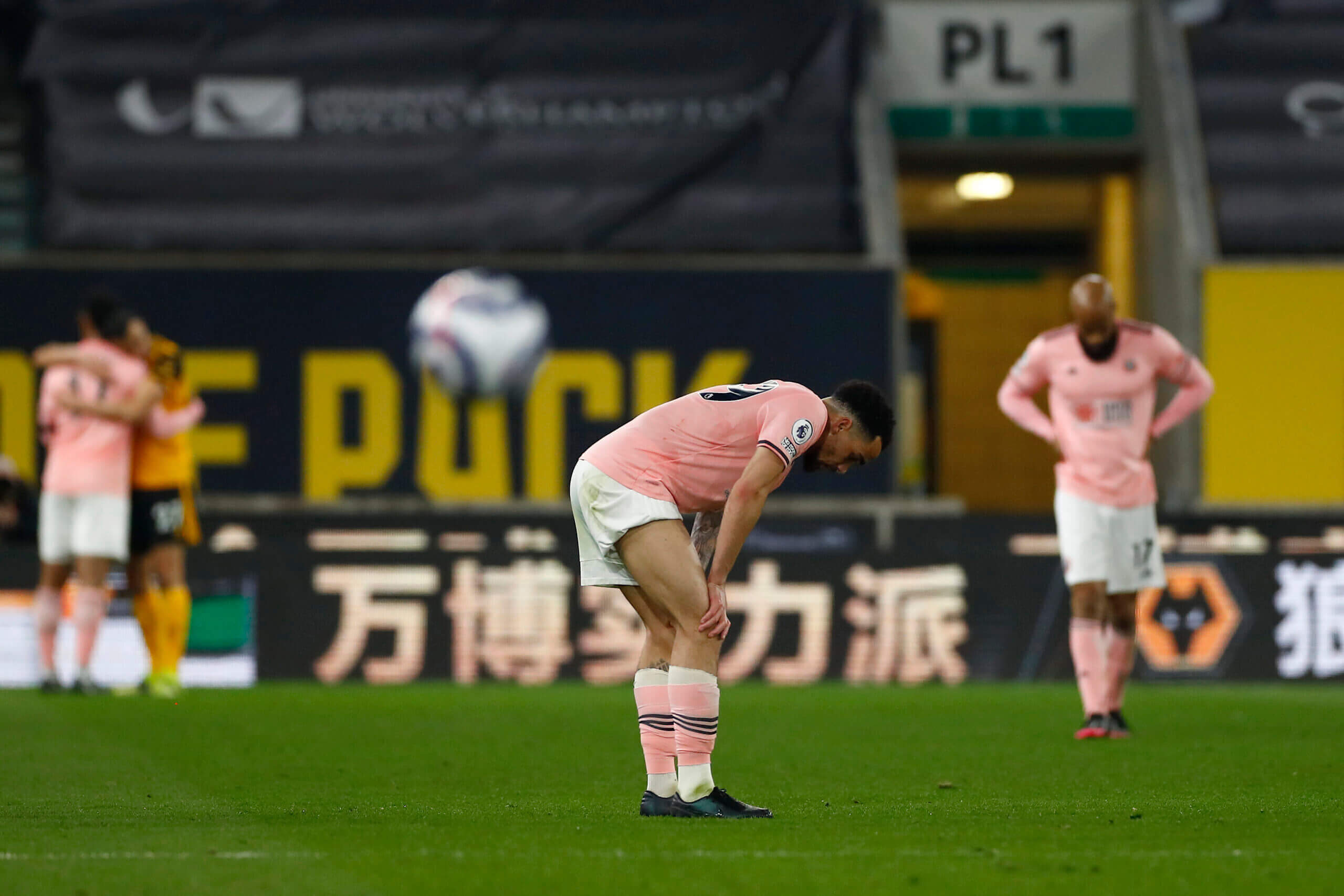 Sheffield United earned more by finishing bottom of the Premier League in 2021 than most teams earned in the Champions League (Photo: Jason Cairnduff/Pool/Getty Images)

Fail to exit the group stages, as Inter Milan and Ajax did in that season, and earnings from the Champions League are likely to be less than £45million depending on the club’s coefficient ranking, which is determined by the past five years of European results. The higher a club’s coefficient, the greater the share of the pot received by a club, regardless of performance in that year’s tournament.

Europe’s elite can be confident they will stay in the Champions League year after year, but their frugal spending may indicate some aversion to risk. Atletico Madrid, Sevilla, Eintracht Frankfurt and Bayer Leverkusen have all spent less than £20million so far this summer — or in other words, less than Crystal Palace.

Prize money for those fortunate enough to be in the Champions League has climbed and will keep on climbing by the time a new TV cycle begins in 2024.

A new three-year UK deal, struck last month, is thought to be worth £500million a season and marks a 20 per cent rise. Paramount Global has agreed a six-year deal for the US media rights — $250million (£212m) per season. That is a 50 per cent improvement in financial terms.

Those deals will begin in 2024-25, coinciding with the competition’s switch to a Swiss model format, which will make lifting the Champions League worth more than ever before.

The Premier League, though, already has its own lucrative agreements in place.

A new Scandinavian deal with Nordic Entertainment, which is worth double the last one at £335million a season, has begun, while NBC’s extension to the American rights package is worth a similar annual figure.

The Premier League’s overseas TV deals now bring in more than the domestic market. Combined, they are worth an estimated £10.5billion over the next three years. That is a rise of 16 per cent.

Given that additional international income will be distributed through merit payments, it is estimated the Premier League winners this season will earn close to £180million.

“Total revenues are still outstripping the other major leagues in Europe and if you look at the broadcast deals as well, something that’s the big driver in spending, the Premier League has international rights topping domestic rights for the first time. We’re looking at about £10billion across a three-year cycle.

“Knowing those revenues are in place until 2025 gives clubs the assurance that if you stay in the league, the money is going to be there. Clubs know they can spend against that.

“Even if you finish bottom of the Premier League, you’re guaranteed in the region of £100million in broadcast money alone. That’s why you’ve got those clubs outside of the big six who are willing and able to spend such big numbers because they know what’s coming their way year on year.”

All this, of course, plays into the narrative that a European Super League is more asleep than dead. Barcelona, Real Madrid and Juventus, the greatest agitators last time around, are unhappy with the advantages English clubs enjoy and believe a new European competition would be to their enormous financial benefit. 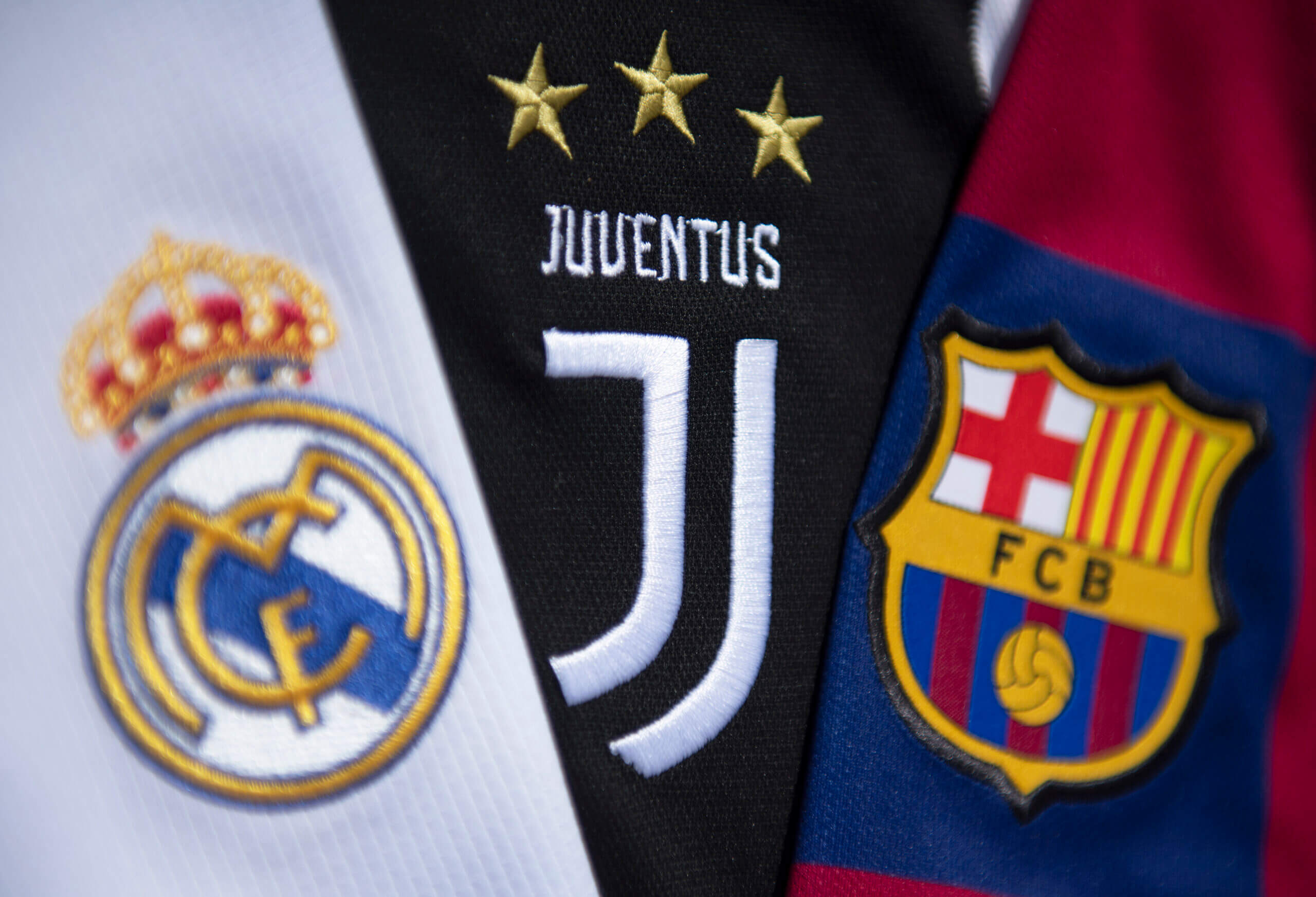 “Monza get €33million (£28m) from TV rights, and we must give €3million (£2.5m) to Serie B. A newly promoted team in England gets €160million (£135m). How can we compete with Nottingham Forest? And how can I stop this tendency of the world economy?

“There should be a Brexit in football, too.”

Galliani’s figures detailing a windfall of £135million for Forest might be high, but his broader point stands. English football and its financial might is crushing the notion of fair competition in Europe.

Some players will choose prestige and the chance to play in the Champions League, like Charles De Ketelaere, who favoured joining AC Milan over Leeds United this summer, but others are content to make the Premier League their pinnacle.

Matheus Nunes could have played in the Champions League again with Sporting Lisbon this season but favoured a transfer to a Wolves team that finished 10th in the Premier League last term. The same with Diego Carlos, who gave up Champions League football with Sevilla to join Aston Villa. Red Bull Salzburg, the Austrian champions and therefore automatic qualifiers for the group stage, could not keep Brenden Aaronson and Rasmus Kristensen. Both are now with Leeds United and former coach Jesse Marsch.

“When the English clubs go into the market there’s often this English tax, a sense of making as much money as they possibly can,” adds Bridge. “But it must be concerning when some of the best talent in other countries is coming to play in the middle tier of the Premier League rather than in the Champions League.”

Earning power for players is invariably higher in the Premier League, but there is a growing sense, entrenched this summer, that England’s top tier is where talent gravitates. The Premier League dominance is real and only hardening.