The then 16-year-old had been monitored by Marco Neppe, the serial German champions’ now-technical director who has also been responsible for identifying youngsters including Alphonso Davies, now 21, and Jamal Musiala, 19.

It was only when they started doing their due diligence on Timothy that Bayern realised he had a younger brother called Malik who, while just 13 years, was also an outstanding prospect.

On many such occasions, a superclub of Bayern’s stature might simply have informed their scouts to keep tabs on the younger brother for the next few years, but Malik was different.

So different that then-sporting director Michael Reschke personally travelled up from Munich to change the conversation from being about one Tillman joining Bayern to bringing the entire family.

Nuremberg, the second largest city in Bavaria, is just over 100 miles (169km) north of Munich, the largest. Moving was a huge decision for the Tillmans to make.

“For two young boys, when they hear Bayern Munich want to sign them their eyes light up, as it’s a dream. They immediately want to go. But it was their mother we had to convince,” Reschke tells The Athletic.

Their mother brought the boys up as their father is in the American military and based in the United States. She was protective of her teenage sons and wary of the pitfalls of such a move, but Bayern sought to reassure her that Timothy and Malik would have the best of everything to help them forge playing careers at the top level.

“Everything was done with his mother. She really took care of them and she made the decision,” Reschke says. “We decided that the family would come to Munich and leave their home, school and social life, so we had to be really close to the mother and helped her with a new house and a new job for her and her partner.

“It was unusual I was part of it — I only dealt with the professional side usually. It was a mixture of two outstanding kids and two from the same family, which is why I got involved along with Marco.”

This is the commitment and leap of faith it takes for young boys to turn their dream into reality.

Timothy, now 23, rejoined Greuther in January 2020 after not being able to break into Bayern’s senior team.

His younger brother has now also flown the nest.

It is a different situation with him, though.

It is understood Bayern believe the younger Tillman still has the potential to be a part of their first team one day and that is why the loan deal that brought him to Rangers this summer has been structured the way it has.

Rangers’ year-long agreement includes an exclusive option to sign the now 20-year-old permanently at an agreed fee, but The Athletic is informed Bayern retain a buy-back option on top of that, which would allow them to re-sign the two-cap USA midfielder at a higher price than they sell him for.

It is a type of deal Bayern have done with their top talents in recent years and Tillman’s availability on loan this summer was strictly prefaced by the need for his parent club to still have his long-term future in their hands. 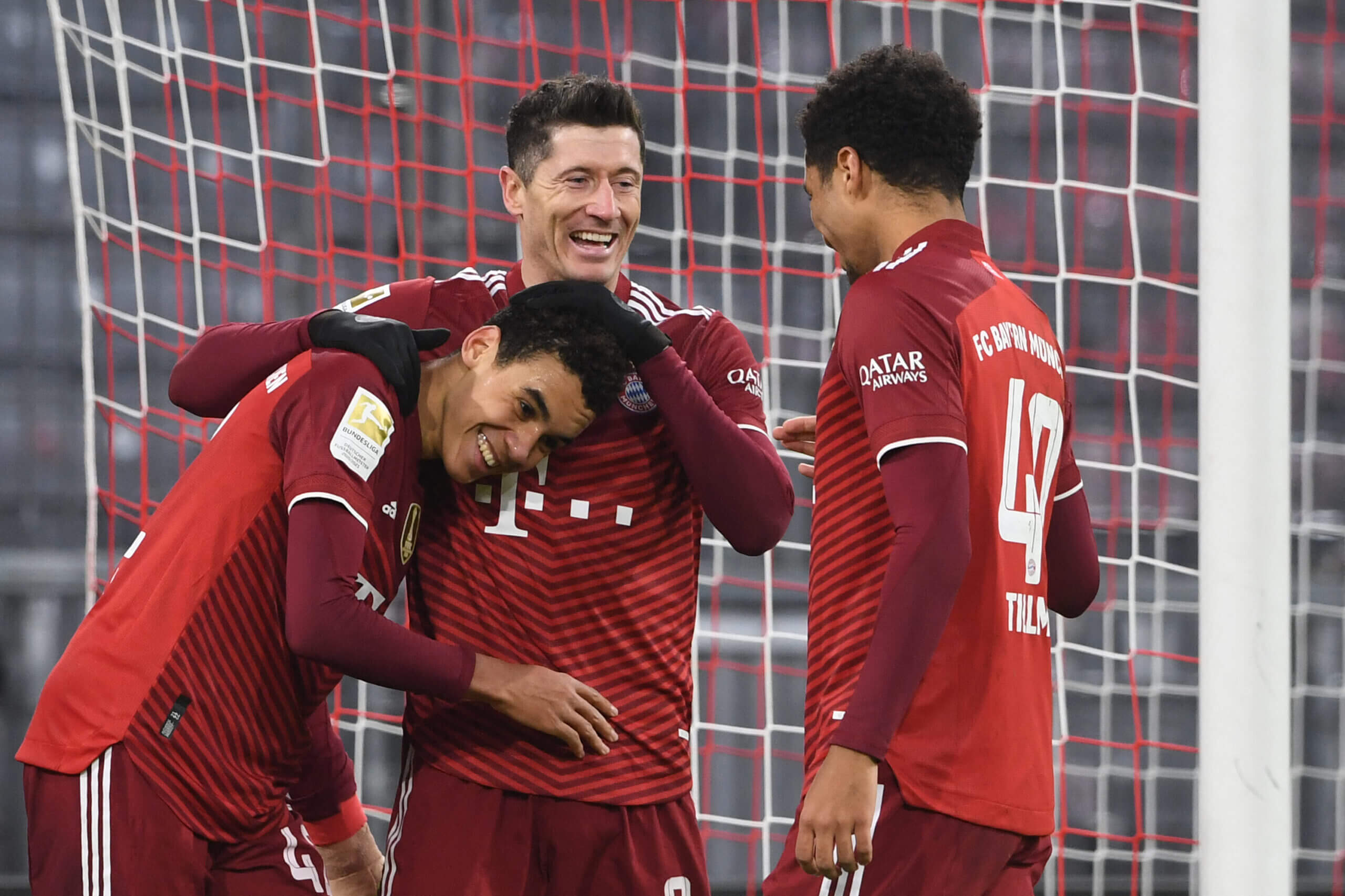 Indeed, there is a belief they rate him so highly that a very successful season with Rangers, which he is on track to have after these encouraging early weeks, could see the Scottish side trigger their option to buy and then Bayern trigger the clause to bring him back!

It is so early into his stay in Glasgow that all options are still open, and where Tillman will be in the Bayern pecking order would need to be assessed, with Musiala, Thomas Muller, Ryan Gravenberch, Marcel Sabitzer and fellow youngsters Paul Wanner and Gabriel Vidovic all capable of playing that same attacking midfield role.

It is, obviously, an elite squad in Munich but if Bayern decide performances such as Tillman’s dominant display against PSV Eindhoven on Wednesday in Rangers’ Champions League play-off decider triumph, and strong outings in their six upcoming group games with Ajax, Liverpool and Napoli, prove he is ready for that level then this will be a deal all parties have won from.

Many teams in football have to pay parent clubs to borrow players who turn out to not be capable of making an impact. Instead, Rangers would have had the services of a top talent deemed capable of playing for Bayern for a season — and made a financial profit from doing so.

“When I spoke to Malik for the first time I could see in his eyes that he was focused and wanted to develop. From the first moment he joined, he was a starting player. He was a natural on the pitch. When he is playing, he is like a fish in water,” Reschke says.

“Everyone involved in the deal deserves huge compliments. I was surprised by the move as usually top talents like Malik would go to Austria or another German side and it’s not common for a Scottish club to do this sort of deal.

“It’s unusual, so I compliment the scouting system and the sporting director at Rangers for the decision. I was very surprised when I read it. I thought, ‘Oh, there is someone intelligent there to do this deal’. It’s a very clever deal.”

Ross Wilson has pulled off an impressive move by striking a unique agreement that, one way or another, will see Rangers benefit from a sporting and commercial perspective.

Tillman won the ball back and set up the goal that sealed Rangers’ progress through to the Champions League proper for the first time in 12 years.

Overcoming PSV is worth at least an estimated £20million more to the club than a standard Europa League season and several of the outstanding performers in that tie were new players to the squad in James Sands, Tom Lawrence and Antonio Colak, with the latter scoring in both legs.

January loan signing Sands’ progression this season has been phenomenal and he is another whose deal to come to Rangers was struck after they agreed to an uncommon structure. An 18-month loan from New York City of MLS with an option to buy, which reports in the US say is for around £4.5million, looks like it could be good business.

As with Tillman, there could be the potential for Rangers to flip the 22-year-old central defender in the same summer they buy him and make a decent profit if his progress continues.

Both players stand a chance of being picked for the World Cup this November and December, with Tillman having opted to represent the US at senior level after turning out for Germany from under-15s to under-21s.

If Tillman’s time at Ibrox propels him into Bayern’s plans, it could also see Rangers become a destination for other similar talents on the fringes of top European clubs’ squads.

Previously, any academy loans have come from England and they have not had a good success rate. Now, with Champions League football to offer, Rangers have a unique profile — a huge club where players must perform under intense pressure and have the chance to win trophies and compete at top European level but with the need to be a development club at the same time.

Stefan Buck has worked with Malik Tillman as an assistant coach at the under-16 and under-19 levels and then with Bayern Munich II — their under-23s side — last season, where he assists former Argentina international defender Martin Demichelis.

When Tillman joined Bayern at 13, he immediately became a starter in their academy ranks and was soon one of the top players, which Bucki, as he is known, puts down to his rare combination of talents. 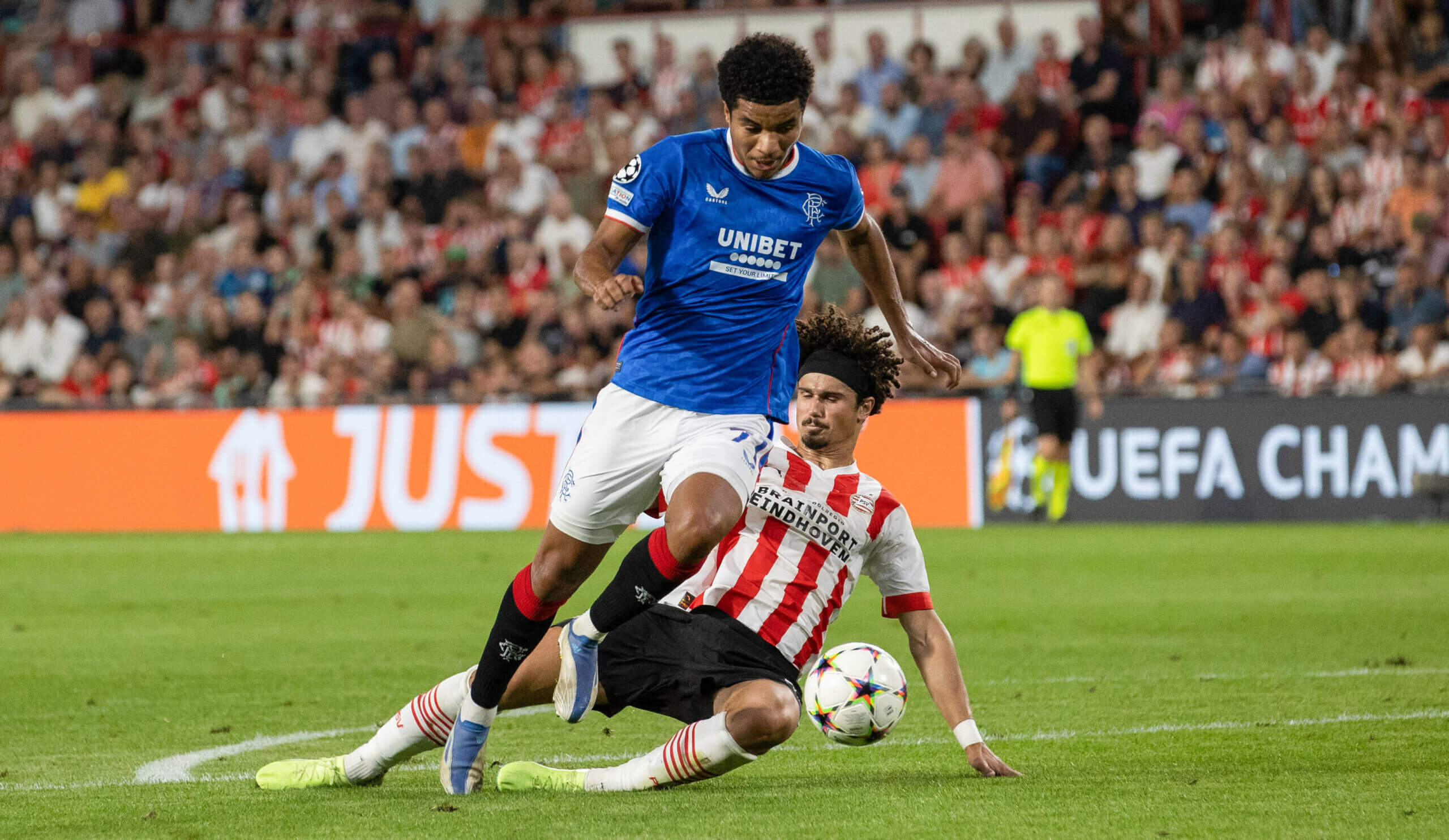 Malik Tillman gets away from PSV’s Andre Ramalho to set up Rangers’ winner (Photo: Alan Harvey/SNS Group via Getty Images)

“At his age, he was always one of the best three players throughout the academy,” he says.

“He’s always been a really, really good player. Not just as a footballer, because he’s very technical, but as a player because of his physique too.

“It was his decision-making with the ball that was different at a young age, though. When he got it, he always took the correct one or found a solution — at 15, it’s not usual that you’re so developed that way. His route to the penalty box was very straight and that’s why he was efficient, which is the reason he scored a lot of goals and made a lot of assists every year.

“His technique and speed with the ball were so difficult to stop. He would look for one-v-ones but teams would try to put two or three men on him, which meant there was then space for other players.”

Tillman’s ability meant he was given a big role for Bayern Under-17s at just 15, and he soon became the main player there too.

He has played different positions in the Bayern youth teams, being used primarily as No 9 for the under-19s in 2019, when he registered 13 goals and seven assists, but also on both flanks and behind the striker.

Under Buck, he played most of his football as a box-to-box midfielder, where comparisons were drawn with former Bayern, Chelsea and Germany player Michael Ballack due to his powerful running and goal threat.

Then-coach Hansi Flick promoted Tillman to his first-team squad in 2019-20, when Bayern recorded a famous treble. He made seven appearances that season, scoring his first senior goal, making debuts in the Bundesliga and Champions League, and being rewarded with a new contract until 2024.

Last season, he got four goals and four assists in 15 games under Demichelis for Bayern II, but it was the progression he’d made by training with the first team that was most noticeable.

“He was a special player, but when he came back to the under-23s after his first summer with the first team, he returned looking like a machine,” says Buck.

“Training with the first team is much more physical and the athletic department there develops you to be ready for the top level. The whole of football has become very athletic and if you are like Malik, who is 6ft 1in (187cm) and quick, you have a big advantage.

“Some guys take years to adapt, but Malik only took one or two months when he started playing against men at under-23 level. Training with the first team helped with that, as guys like Muller know every situation and have the experience, so Malik is clever enough to learn from that.”

Tillman had a difficult first half against PSV in the play-off tie’s opening 2-2 draw at Ibrox but that ability to learn was shown a week later in Eindhoven.

He was outstanding as he peeled off to the left of the midfield to pick up the ball and inject creativity into the visitors’ play.

In an intense atmosphere he never once rushed a pass, his composure to wait on the exact moment the sign of a top player. He was able to physically overpower Ibrahim Sangare at times in midfield, which is not easily done, but it was his calmness to square the ball to Colak for the decisive tap-in, rather than panic and mess up a simple situation, that won the game and tie.

“Malik is only 20 but it is important he is now playing on a high level as he needs these games to take the next step,” Buck says.

“He can dribble, pass, score, run, and he was special in the air for us too. He has everything needed to have a top career.

“Hopefully his season at Rangers will help him do what some famous Bayern players have done, which is go out on loan and return as big players — (the likes of) Philipp Lahm, David Alaba and Toni Kroos.”