Jurgen Klopp has hinted Liverpool could enter the transfer market before next week’s deadline, saying the club are “working constantly” to find the right player to add to their squad.

The Liverpool boss appeared to rule out the possibility of bolstering his injury-hit midfield earlier this month but, having taken only two points from their first three Premier League games of the campaign, Klopp says they will act if the right player becomes available.

“You can imagine, we are actually working constantly on these kind of things but there are reasons why sometimes they don’t happen,” he said at his press conference ahead of Saturday’s meeting with Bournemouth.

“Sometimes it is too expensive, sometimes it’s not the right player.

FREE TO WATCH: Highlights from Manchester United’s win against Liverpool

“Then, the situation changes, but one thing that stays really important is that it needs to be the right player.

“We are working but we will see. If something will happen or not, I don’t know.”

Liverpool’s 2-1 defeat to Manchester United on Monday left them 16th in the Premier League table and five points behind champions Manchester City.

Klopp confirmed injured trio Curtis Jones, Thiago Alcantara and Naby Keita could return to training next week but, with Alex Oxlade-Chamberlain also sidelined, he admitted his squad is short in midfield.

He was, however, eager to emphasise that, while Liverpool are working to find the right player, there will be no panic signings.

“It must be the right player,” he said.

“Some players are just unavailable, that’s how it is, but if we can do something, and if we will do something, then we are 100 per cent convinced about it. If we are not convinced, then we will not do it. That’s the situation.

“You were all right and I was wrong. That is the situation.

“But that specific point doesn’t change it. If we do something, then it has to be the right one.

“It would be great if nobody gets on the list, on the other side, and it’s an intense time coming up. We know that.

“But we will not change the way we deal with the situation. There’s nothing really for me to say to you at this moment.”

‘No problems between Van Dijk and Milner’ 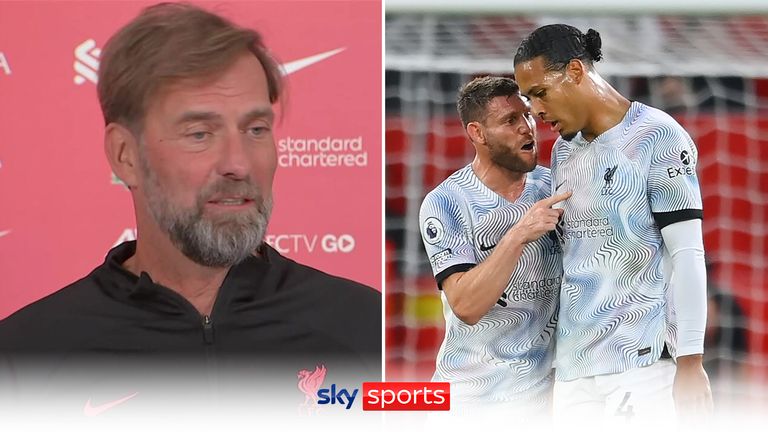 Klopp admitted Liverpool needed to “regroup” after Monday’s defeat to Manchester United but insisted there is no bad blood between James Milner and Virgil van Dijk after they were seen remonstrating with each other on the pitch at Old Trafford.

“Obviously, everyone saw it,” he said.

“I was a pretty emotional player in my time, and I had these kinds of conversations on the pitch more often than not with my best friends.

“There is nothing to clarify, really. It’s a situation when you are discussing things on the pitch.

“Especially nowadays, with all the cameras, then it looks much more serious that it is.

Klopp is under no illusions about the need for improvement when Liverpool face Bournemouth on Saturday and urged his players to increase their effort and passion to turn their poor form around.

“We have to improve, definitely,” he said.

“What can we improve immediately? Effort.

“Maybe it was at 95 per cent but in the world of football we need 100 per cent, if not a little bit more. We also need passion. Don’t wait for the perfect pass.

“It’s highest-level football. It’s all football things and we have football solutions. We have to get through this. The things we achieved in the past few years was never easy. Nobody should expect it will be easy now.

“It will be really difficult tomorrow but let’s go for it together.

“One of the main rules we have is that everyone is responsible for everything.”

Bitcoin and Ether Trade Lower Along With Equity Markets | Video

Looking Back At Nine Years Of Bull Run