At the end of every Premier League weekend BBC football pundit Garth Crooks will be on hand to give you his Team of the Week.

But who has he picked this time? Take a look and then pick your own team below. And, as ever, Garth will have his say on the game's big talking points in The Crooks of the Matter. 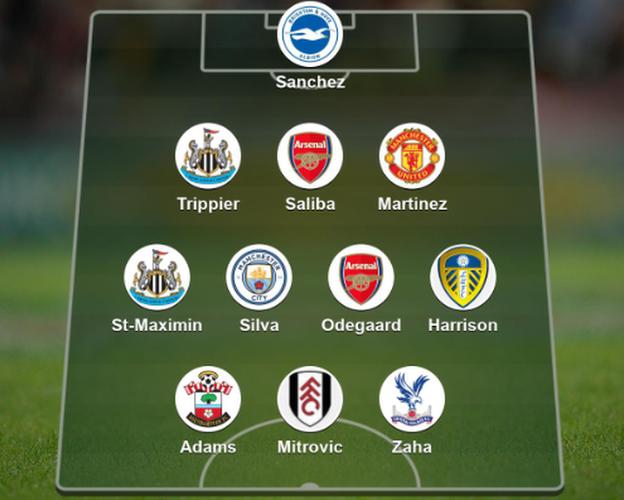 Robert Sanchez (Brighton): The selection of Robert Sanchez is as much a testimony to the performances of the Brighton team as it is to their goalkeeper.

Albion's 2-0 win was a bad result for West Ham and confirmed all our fears that their defeat last week against Nottingham Forest was no fluke. The Seagulls however appear a match for any team these days.

Sanchez looks very comfortable between the sticks and pulled off two outstanding saves that, had they gone in, might have robbed the best side of victory. West Ham have problems and they need to find their rhythm sharpish. If not, the fans will turn on David Moyes very quickly.

Kieran Trippier (Newcastle): It was one hell of a performance by the team captain and the highlight was a superbly taken free-kick.

Trippier, who was clearly prepared to put himself on the line for his team - and nearly did. The tackle on Kevin de Bruyne was cynical and reckless and the original red card should not have been rescinded.

He said it was not his intention to hurt De Bruyne but to stop the player. It is a point I understand but it's irrelevant because it was the cynicism that should have been punished, not just the tackle. Video evidence doesn't just give the referee a second and third chance to look at the offence but to analyse his decision. It is the referee's opinion that matters and the referee's decision that is final.

William Saliba (Arsenal): He was impressive in Arsenal's opening fixture, scored an own goal in the following game and netted his first goal in English football in the next. Saliba certainly knows how to make an impact.

It's one thing helping your team keep a clean sheet away from home but then to go hunting for goals at the same time is enough to make me sit up and take notice. For a defender he certainly knows how to score a goal. His finish against a Bournemouth side, who on this occasion appeared totally out of their depth, was quite brilliant.

Lisandro Martinez (Manchester United): I questioned recently whether Erik Ten Hag had what it takes to manage Manchester United and I was scathing about the performance of Lisandro Martinez against Brentford. Well, both came up trumps against Liverpool. Ten Hag showed real metal to leave out Harry Maguire and Cristiano Ronaldo and instead invested in youth, while Martinez looked like a centre-back who had finally come to terms with the physicality of the Premier League. As for Liverpool they were not at their best and haven't been this season. It's early days but United have lift off.

Allan Saint-Maximin (Newcastle): Occasionally you come across players that can make things happen in a football match and Saint-Maximin is certainly one of them.

You can feel the air of expectancy at St James' Park every time the Frenchman gets the ball. It was the same when Paul Gascoigne, Chris Waddle and David Ginola played there. The Newcastle fans love their ball players. Saint-Maximin is in the same mould. He was at the heart of everything Newcastle could do to hurt Manchester City.

He set up Miguel Almiron to score, took City apart to assist Callum Wilson to score and caused abject panic in the visitor's ranks which led to the free-kick for Trippier to score. A touch of class.

Bernardo Silva (Manchester City): The ball from Kevin De Bruyne to Silva was sensational and matched only by the finish. The pass split Newcastle in two and the finish by Silva provided Manchester City with a well-deserved point. In fact the entire move had me on my feet applauding. However, it was the coolness of Silva's finish in the white-hot atmosphere of St James' Park that had me brimming with admiration.

It was also the Portugal international's ingenuity that provided the opening and assist for Ilkay Gundogan to put City ahead in the opening exchanges. This was a great game of football served up by two teams going for the jugular vein.

Martin Odegaard (Arsenal): There is something rather cultured about Odegaard's game. He never seems too rushed and he is very comfortable on the ball. His second goal against Bournemouth was considerably better than his first even though both his goals were created by the brilliantly rejuvenated Gabriel Jesus.

Mikel Arteta has made a good choice in appointing Odegaard has his new club captain. The calm and unexcitable Norwegian seems to have a very different temperament to the likes of the recently departed Pierre-Emerick Aubameyang or Granit Xhaka. Both of whom have worn the captain's armband in the past but not, I'm afraid, with any distinction.

Jack Harrison (Leeds): What happened to the Chelsea that played Spurs off the park at Stamford Bridge but a week later looked like a comedy of errors against Leeds at Elland Road? I saw a Champions League team made to look like a mid-table Premier League side, which is where they currently sit.

Thomas Tuchel would do well to start directing some of his anger towards his players and not the games officials. Leeds, meanwhile, suddenly look like a proper Premier League team and Elland Road returning to the days when every team going there hated it.

Harrison was the star of the show and has never looked back since he left Manchester City.

Che Adams (Southampton): What is going on at Leicester? Kasper Schmeichel has gone, Youri Tielemans looks like he's going and Wesley Fofana has one foot out of the door.

To expect Leicester to perform in an environment where there is so much uncertainty is not fair to the manager, the players or the fans. The quicker the club gets through this transfer window the better.

Southampton, meanwhile, have retained the services of Adams who transformed the game for them when he came on against the Foxes. It just goes to show that when you've got a genuine goalscorer in your team you are always in with a chance of nicking the points.

Aleksandar Mitrovic (Fulham): I'm not entirely sure that Brentford's defeat against Fulham was an indication of how bad Manchester United were last week against the Bees or just how seriously we now have to take Fulham.

Within a minute Brentford's impressive victory over United was starting to evaporate.

Mitrovic's movement throughout this match was as good as I've seen from the Serbia international. He looks fitter than I've seen him before and, in the form he is in, should have had a hat-trick. It's quite amazing the effect the Premier League can have on some players.

Wilfried Zaha (Crystal Palace): I thought Zaha took his goal extremely well against Liverpool at Anfield in midweek and really should have gone on to win the game for Crystal Palace based on the chances he had. However, against Aston Villa this unpredictable and impulsive talent tore the visitors to shreds. When Zaha is in this mood there is very little a team can do to stop him.

I think the problem for Patrick Vieira, and the reason the Ivorian has not moved to a top four club is that the player doesn't do what he does best often enough. Personally, I would like to see Zaha playing European football and put his talents really to the test. It would be nice to know how good this lad really is.

The Crooks of the matter

What took place at Stamford Bridge last Sunday afternoon when Chelsea took on Tottenham was a throwback to the game played in the 1980s. The referees have finally allowed the game to flow again. They no longer stop and start it with their petty irrelevancies and VAR is less inclined to interfere.

Yes, of course the occasional mistake will be made by the officials and VAR but that only adds to the colour of the occasion. Football is a sport and not a science and luck and chance must be allowed to play its part. The Premier League has been very wise to allow the most physical league in the world to breathe life into itself again because part of the game was beginning to die and some fans, albeit of a certain age, were starting to lose interest.

Another important feature of the match was the poor behaviour of both managers. Thomas Tuchel and Antonio Conte's dismissals for their clash on the touchline at the end of the match, while childish and unnecessary, highlighted just how high the stakes were even though it was only the second game of the season.

At one point I wasn't sure if the two men were doing the waltz or the military two step but whatever it was the FA was right not to let the matter go unpunished. If managers can't control themselves on the touchline when under pressure how can they insist that their players do?