Chelsea are now prepared to pay up to £60m for Everton forward Anthony Gordon.

Everton's position this summer has been the player is not for sale. The £60m fee being prepared is the total value of a potential deal including add ons.

Earlier this month, Everton rejected Chelsea's initial bid of around £40m-£45m for the forward.

Conversations between the two clubs have been ongoing, however, and the London club are now willing to increase their offer.

A new contract remains on the table for Gordon, whose current Everton deal expires in June 2025.

Frank Lampard needs to add forward options to his squad before the transfer window ends and a potential deal would raise the finances to make that happen.

Tottenham wanted to sign the England U21 international in a package deal with Richarlison for a combined £80m earlier in the summer but were not successful. Newcastle also made an approach, but did not submit a formal bid. 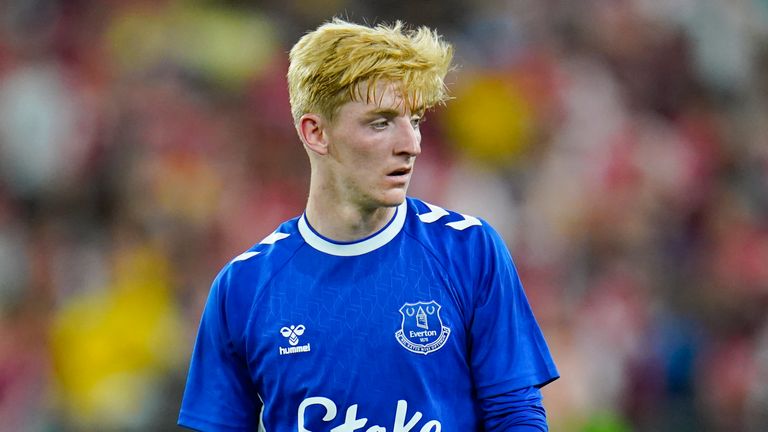 Everton manager Frank Lampard says Anthony Gordon is a 'valuable asset' for the club, but admits they are considering offers for Dele Alli.

Gordon has started all three of Everton's Premier League games so far this season, playing at times as a false No 9 in the absence of Dominic Calvert-Lewin as the striker recovers from a knee injury.

Gordon has made 52 Premier League appearances so far for Everton, scoring four goals.

It was his free-kick which led to Jarrad Branthwaite scoring an equaliser against Chelsea at Stamford Bridge in December last year.

Sky Sports' Graeme Souness said: "£40m for a 21-year-old who has played 51 times in the Premier League? He's not set the heather on fire yet.

"He's a dribbler and he's quick enough. For me, he goes to ground a bit too easily but that's a lot of money for someone who's only played 50 games. It's not screaming at you when you see him play that he's going to be a top man."

New Chelsea owners Todd Boehly and Clearlake Capital have spent their first summer at the Stamford Bridge helm conducting a swift overhaul in every department.

The ambitious US bosses have already spent big on Sterling, Koulibaly, Cucurella and Carney Chukwuemeka.

Highly-promising young goalkeeper Gabriel Slonina has been signed and will remain on loan at Chicago Fire, while the Blues continue to chase Inter Milan's teenage midfielder Cesare Casadei.

Chelsea are understood to be in negotiations with Barcelona over a deal for striker Pierre-Emerick Aubameyang, while the quest to prise Wesley Fofana away from Leicester also continues.

"It's a lot of money for a young player who is just coming onto the scene, but I don't see how Everton could accept that. The position they find themselves in right now, lacking attacking players.

"He's the one big hope for the club. The supporters aren't deaf at Everton. They've lost their first two games and they know they're in for a difficult season. They need attacking players to come in so there's no way they can let him go.

"Especially with him being a local lad, he's the one fans are hanging their hats on. I think it would have to be a lot higher than that if Everton are going to sanction that."

Where would Gordon fit in at Chelsea?

"There's been rumours of Christian Pulisic and Hakim Ziyech going so he'd be more of a like-for-like replacement for one of them. He's young, he's an English talent and that's the sort of recruitment they've gone for.

"They want some young and some experienced players. In terms of getting in a recognised centre forward, he's not the type of player or answer that's been spoken about."

Is Gordon the answer to Chelsea's attacking problems?

"During an interview with Sky Sports over two years ago, Gordon revealed he was reading Dr Steve Peters' The Chimp Paradox, which provides a mind management programme that helps elite athletes to conquer their fears and operate with control, focus and confidence.

"'It's teaching me that people can have two voices in their heads - the good voice and the bad voice - so it's about how to balance them and deal with that,' he said.

"Gordon may well be wrestling with a similar dilemma to make the right choice now for his career. But if Chelsea are to offer £60m for a player reluctant to sign a new deal, Everton must also consider what is now best for them."

Who will be on the move this summer before the transfer window closes at 11pm on September 1?

Keep up-to-date with all the latest transfer news and rumours in our dedicated Transfer Centre blog on Sky Sports' digital platforms. You can also catch up with the ins, outs and analysis on Sky Sports News.