The images of Gerard, 35, passionately kissing his new love interest, 23, appear in a new video taken by Spanish media outlet Socialite at the Summerfest Cerdanya festival in Catalonia.

The outing comes three months after Gerard split from Shakira, 45, with whom he shares two children. 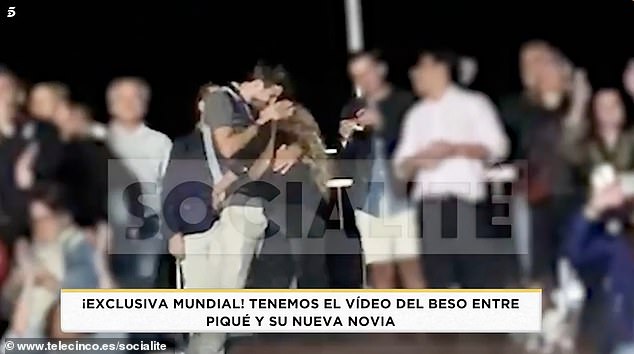 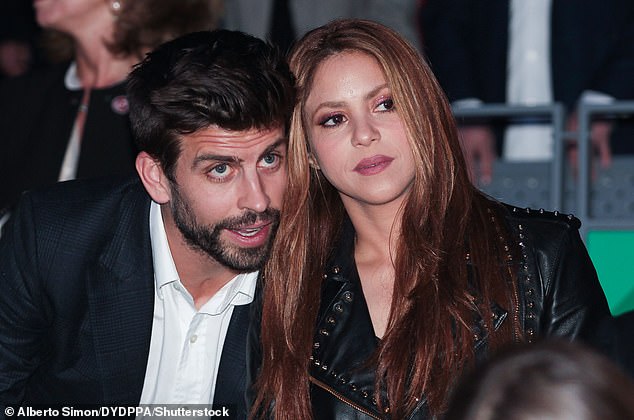 Fury: It’s claimed Shakira and Gerard had a pact in which they would not appear in public with their partners during the first year since the breakup (pictured Gerard with Shakira in 2019)

Clara is thought to work for Gerard at his company Kosmos, in the Public Relations office.

A source told The Sun: ‘Gerard and Clara have been seeing each other for months. She is a student who also works for him in his office, organising events.

‘They have been keeping quiet about their relationship but those around them all know what is happening.’

They added: ‘People have been helping him keep the romance hush-hush and have wiped Clara’s social media accounts so people can’t find photos of her. That alone makes his mates think he is actually quite serious about being with her.’ 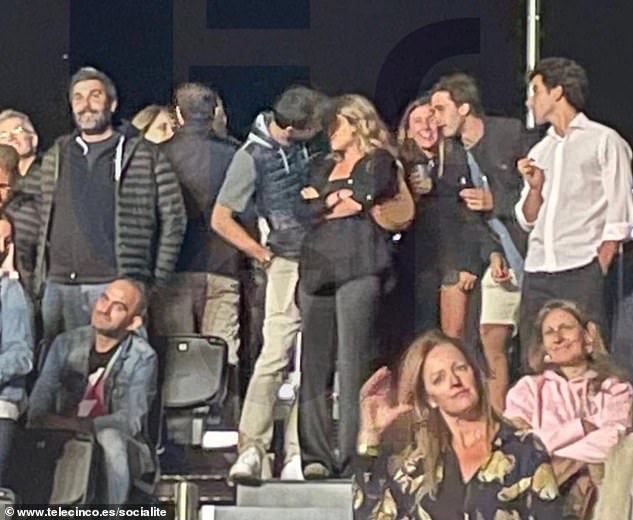 So that’s how they met: Clara is thought to work for Gerard at his company Kosmos, in the Public Relations office 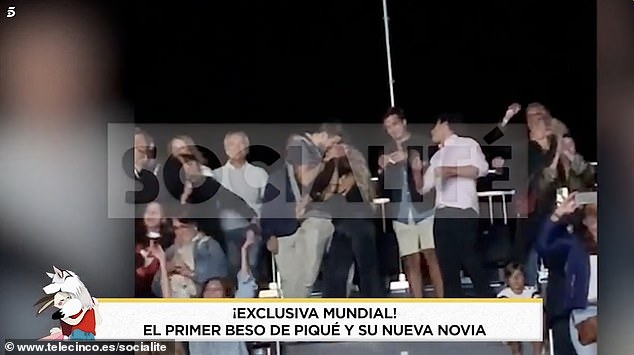 Hurtful: Shakira and Gerard only announced the end of their 11-year partnership in June. They have two sons together, Milan, nine, and Sasha, seven

Shakira and Gerard announced the end of their 11-year partnership in June. They have two sons together, Milan, nine, and Sasha, seven.

Host Laura Roige narrated: ‘I am excited, it is evident that there is a relationship. I have seen a lot of love, it will hurt Shakira a lot, because this is a Gerard Pique that we have never seen. I have never seen him like this with the singer.’

They claim Shakira is ‘very angry at seeing the father of her children with his girlfriend in public’.

It’s claimed they had a pact in which they would not appear in public with their partners during the first year since the breakup.

MailOnline has contacted a spokesperson for Shakira for further information. 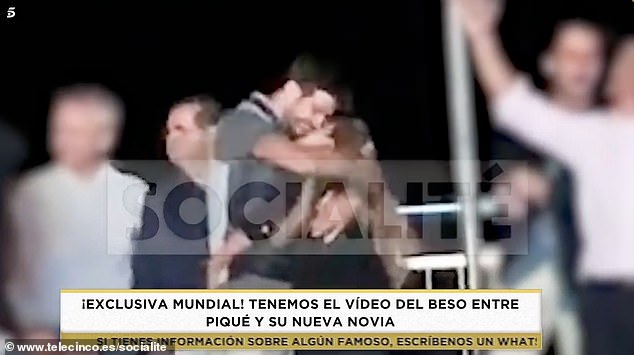 Loved up: Gerard didn’t seem to mind who saw him with Clara, who is 12 years Shakira’s junior 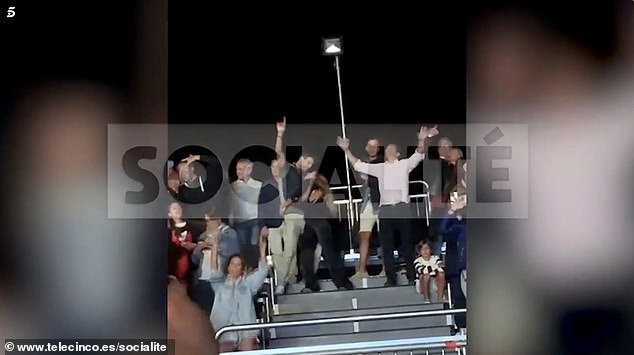 High spirits: Gerard threw his arm up in the air during his passionate display

According to Spanish newspaper El Periodico, Shakira and Gerard are trying to remain friends for the sake of their children, despite their relationship being strained.

The split announcement followed rumours in the Spanish tabloids that the couple were on the verge of breaking up with sources claiming he had cheated on the star.

Shakira’s statement read: ‘We regret to confirm that we are parting ways. For the well-being of our children, who are our highest priority, we ask that you respect their privacy. Thank you for your understanding.’

Spanish outlet El Periodico reported that the couple have been living separately for a few weeks after Pique was kicked out of the family home by the pop star.

According to sources, Pique has since been living a ‘party lifestyle’ in a bachelor pad and enjoying nights out with his teammates. 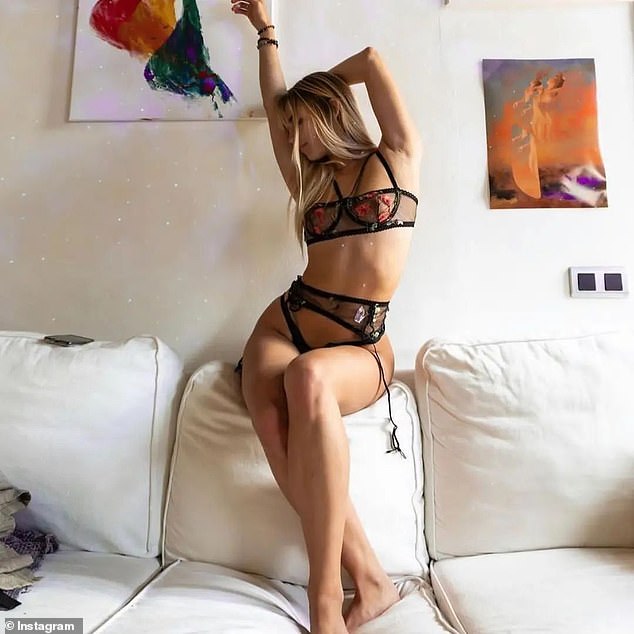 Racy: Clara’s Instagram shows her posing on her white sofa in sexy lingerie 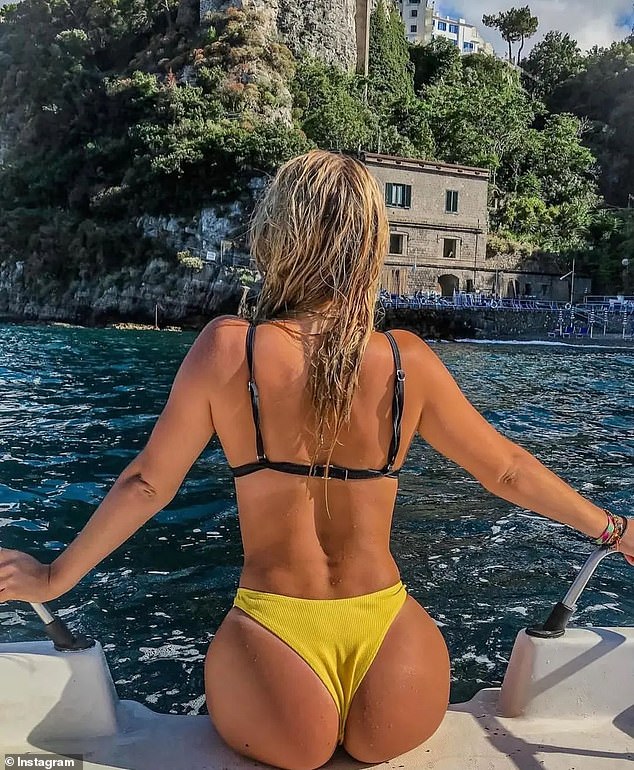 Making a splash: In another, she poses on the edge of a boat in her bikini as she prepares to jump into the water 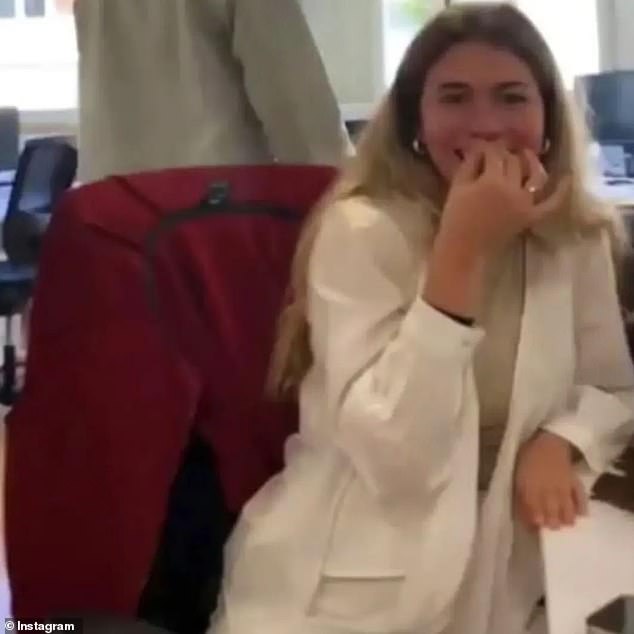 At work: Clara is a student but also works in PR at Gerard’s company Kosmos, in the Public Relations office 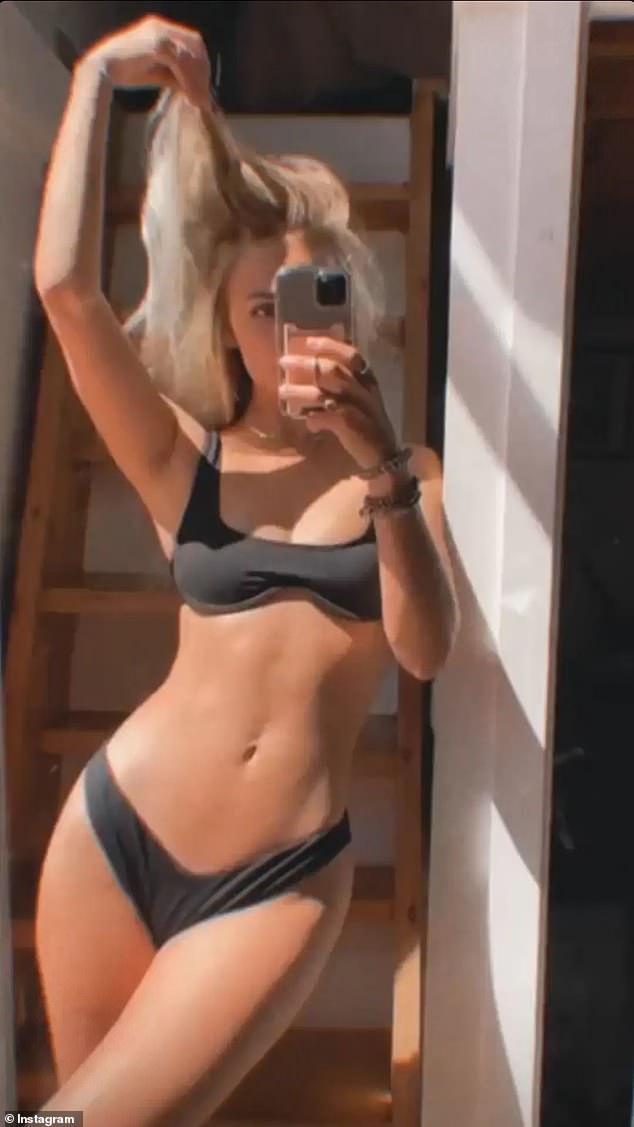 Ab fab: She shows off another sunshine bilkini look on her Instagram page 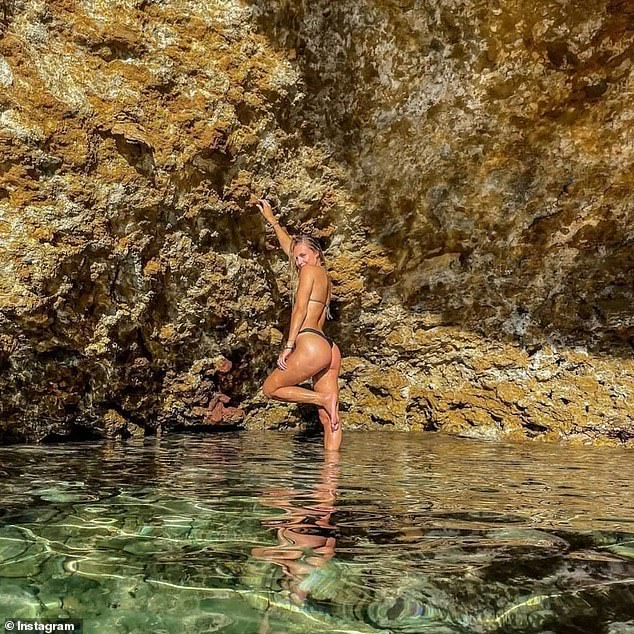 Sunshine glow: Clara poses by the sea for another stunning beach shot 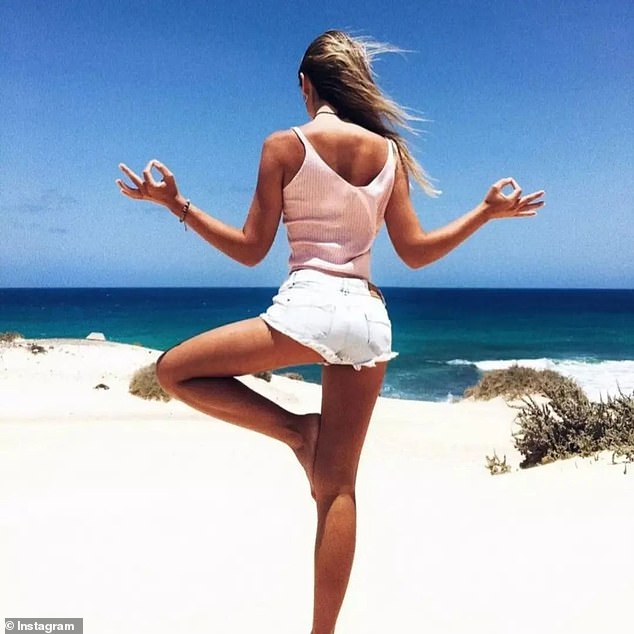 Meditative: She is a clearly a fan of yoga if this shot is anything to go by

Neither party has addressed cheating claims but journalist Emilio Pérez reported: ‘(Shakira) has made the decision to separate. That is so. It has happened.

‘That is why there is distance. Perhaps there is nothing left, but that (infidelity) has passed.’

The couple had been together since 2011, with the pair having met while filming the music video for her World Cup song Waka Waka the previous year.

Piqué’s team happened to win the World Cup that year, where his soon-to-be girlfriend performed during the final game.

Though the two corresponded in 2010, the relationship between the two mega-stars wouldn’t officially take off until the start of 2011.

In the fall of 2012, Shakira would use her Instagram platform to announce to fans that she was pregnant with the football star’s son.

Just two years after the birth of son Milan, the couple went in for round two and reveal they would be expecting their second child, Sasha, who was born in 2015.

The couple admitted publicly that they have no plans to wed, but that hasn’t stopped them from having a family life. 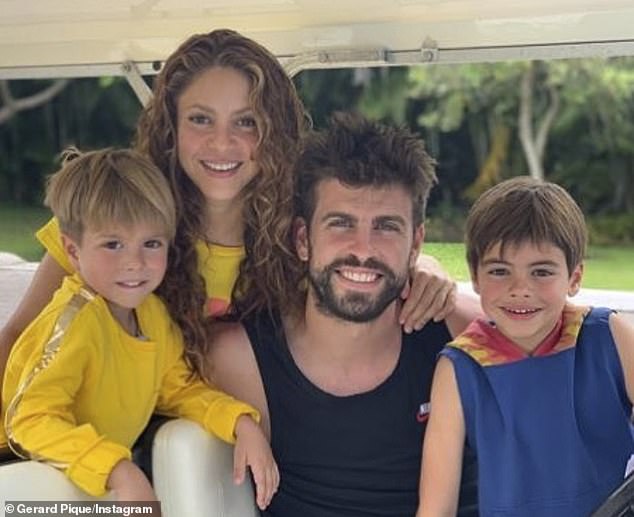 It’s over! Shakira and Gerard split three months ago (pictured with their children Milan, nine, and Sasha, seven)

Speaking to Gary Neville on a recent episode of The Overlap, the Spain international explained that he hadn’t proposed because their relationship ‘works fine as it is.’

Meanwhile, Shakira could face up to eight years in prison for tax fraud.

The singer is accused of pretending on tax documents to live abroad from 2012 to 2014, when she was actually a resident of Spain, authorities from the country claim.

Shakira called Barcelona home while together with soccer star Gerard, who plays for the city.

Shakira is said to be planning to leave the country trying to jail her, and eyeing a permanent move to Miami .

The Colombian superstar has already repaid the $15.5 million she is accused of evading on Spanish taxes, as well as over $3 million in interest.

A spokesman for Shakira said: ‘Shakira has always cooperated and abided by the law, demonstrating impeccable conduct as an individual and a taxpayer, and faithfully following the counsel of PricewaterhouseCoopers, a prestigious and globally recognized tax firm.’ 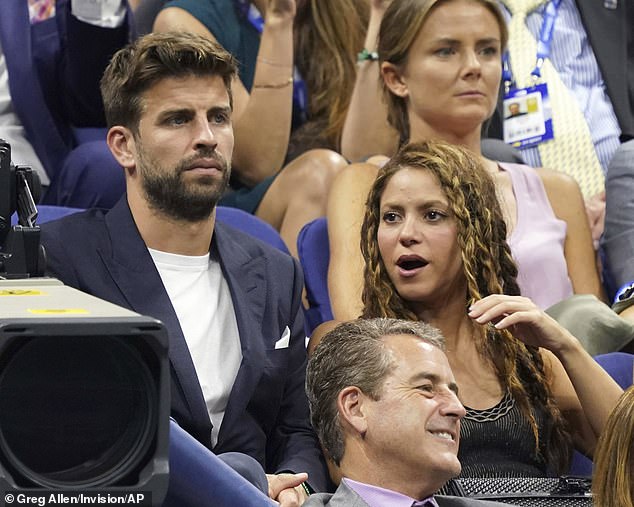 Shock: Back in March, the Barcelona FC defender risked the wrath of Shakira by claiming that playing against Espanyol was better than sex (pictured in 2019)

Game Kickstarter Cancelled In The Most Brutal Way Possible